Review: THE HOUSEMAID, When the Dead Don't Leave You Alone 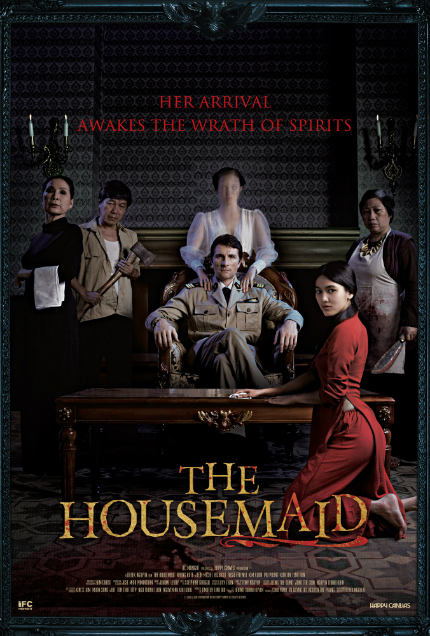 The dead are among us.

Whether you believe the dead are decomposing, wandering, or haunting, they are sown into the fabric of life. Their influence varies greatly, depending upon the beliefs of the beholder.

In Derek Nguyen's The Housemaid (originally titled Cô Hầu Gái), the dead exert a palpable influence upon Linh (Nhung Kate), which is revealed when she arrives at a rubber plantation in 1953 Vietnam, desperate for work. She tells Mrs. Han (Nsut Kim Xuan), the formidable housekeeper who runs the owner's mansion, that she has walked 40 kilometers in search of a job; her family is all dead.

(Though it's not explained in the film, war between the French and the Vietnamese was ongoing at the time, as France struggled to hold on to its colony. France would soon be defeated, though the country would be torn by warfare for the next two decades.)

Mrs. Han decides to take a chance, since a housemaid is needed. Linh is introduced to Ba Ngo (Phi Phung), the cook, who describes herself as an herbalist. She tells Linh that the plantation is haunted by the dead, and that Madame Camille, the owner's wife, has been haunting the grounds ever since she died. The other worker on the grounds is Mr. Chau (Huinh Kien An), who still runs the declining plantation itself with a heavy hand, terrorizing the local contract workers with a loud voice and a big knife.

Late one evening, Captain Sebastien Laurent (Jean-Michel Richaud) arrives home with a mighty crash. He's been wounded in battle and needs tending. Soon after, however, Mrs. Han must leave to care for her sick mother, and she alienates Mrs. Ngo by naming Linh as her temporary replacement. Initially overwhelmed by the idea, Linh eventually warms to her new responsibilities, especially after getting on friendly terms with Sebastien.

As demonstrated in a meeting with fellow French officers, Sebastien retains a degree of stiff formality and aristocratic leaning, yet is also quick to defend Linh after one of the officers assaults her. Emotionally, Sebastien is still grieving for his wife, and the social isolation of the mansion -- and, no doubt, the absence of the imposing Mrs. Han -- opens things up for him to develop feelings for Linh.

All the while, Linh has been seeing spirits in the mansion. Those spirits are haunting, but not in the traditional, straightforward Hollywood manner.

Derek Nguyen, who wrote the original script and makes his directorial debut here, has something more meaningful than that in mind, resulting in a film that is far more complex and affecting than a brief synopsis might suggest. Indeed, appearances can be deceiving and The Housemaid overrides any early concerns, resonating dramatically with a concluding act that caught me off-guard and left me reeling.

Via IFC Midnight, The Housemaid will open in select U.S. theaters on Friday, February 16. It will also be available on various Video On Demand platforms.