Now on Blu-ray: We All Scream For THE RESURRECTED and HELL NIGHT From Scream Factory!

Shout! Factory sublabel Scream Factory has come a long way in the five and a half years since they first appeared on the scene in 2012 with Halloween II. What was once a company focused on big name horror films missing from Blu-ray, has become as much a niche distributor as some of the smaller companies, grabbing oft requested films and doing the work to get them out in the best editions possible. Two recent releases that caught my eye are the recent US Blu-ray debuts of Dan O'Bannon's Lovecraft adaptation The Resurrected, and Tom DeSimone's '80s ghost story Hell Night. Both films have been requested by horror fans for years and Scream was finally able to make it happen. Are these upgrades worth your money? Check out the gallery reviews below for more details. 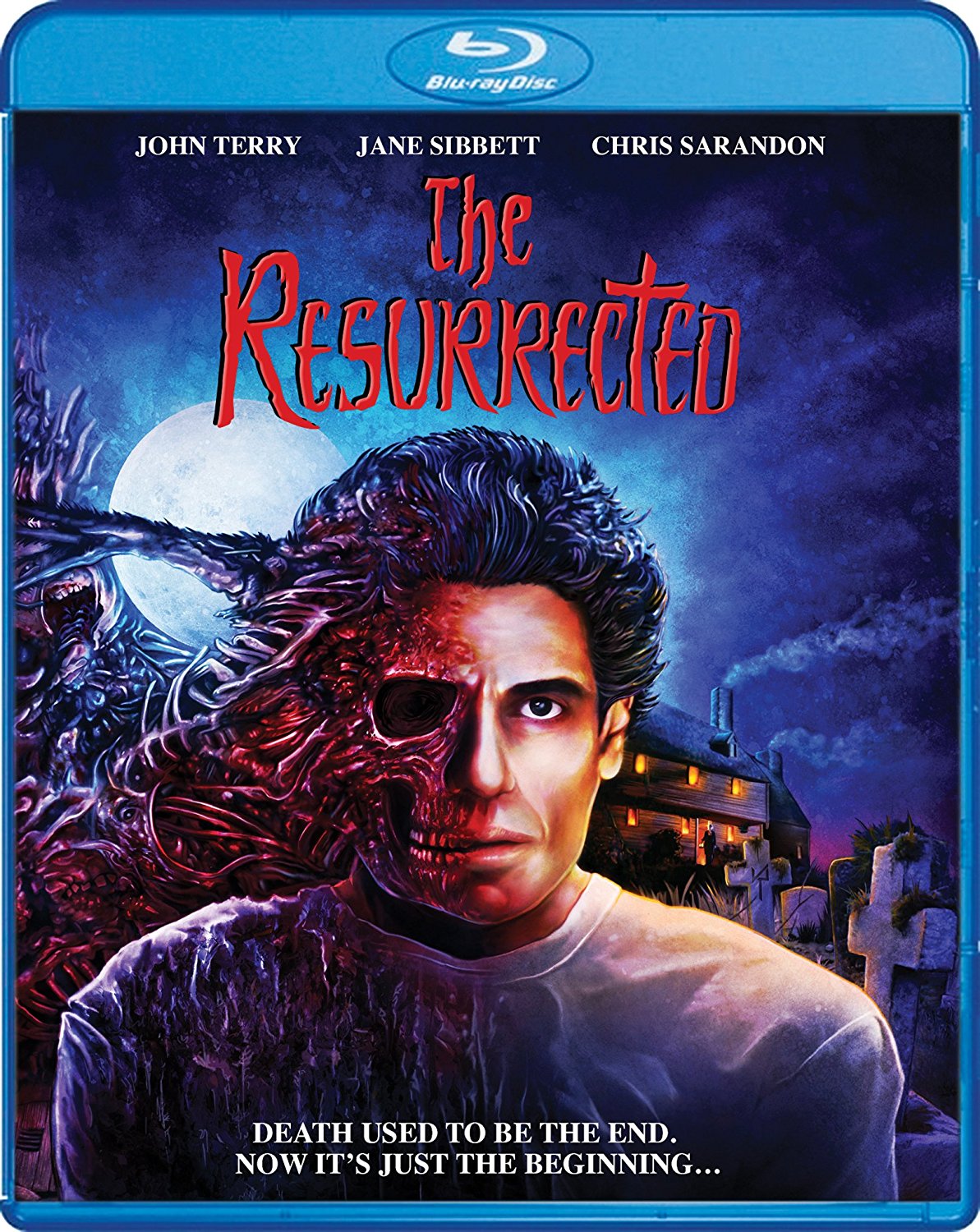 The Resurrected, Dan O'Bannon's second and final feature as a director, was a film that I'd been meaning to see for many years in the lead up to Scream Factory's announcement that they had licensed it for the US last year. O'Bannon is the director of my all-time favorite film, The Return of the Living Dead, and perhaps part of my hesitance to dig deeper and find The Resurrected to view was based on a bit of trepidation on my part. Did I really want to watch his only other film only to find that it was a mess and lower my opinion of the man? In retrospect, it's a pretty juvenile fear to have, but no one has ever accused me of being anything but juvenile, so I'll own up to it.

So, in the name of facing my fears, I popped the film in and was pleasantly surprised. The Resurrected is a relatively faithful adaptation of horror lit legend H. P. Lovecraft's The Strange Case of Charles Dexter Ward, one of his most enduring, and most frequently tapped works. It tells the story of a scientist named Charles Dexter Ward (Chris Sarandon in all his early '90s glory) who may have found a way to cheat death. He holes up in a country farmhouse as he propels himself and his soul deeper into darkness through witchcraft and some ancient remains, and things quickly get really, really gross. His wife Claire (Jane Sibbett) begins to worry and enlists the help of private eye John March (John Terry) to help her save her husband from madness, but it may already be too late. The film hurdles toward in impressively gross climactic battle that will have practical FX nuts salivating with delight.

In terms of the film's connection to O'Bannon's prior work, there really isn't much of any connective tissue at all, either thematically or in terms of style. Return is a horror comedy, the greatest horror comedy in my opinion, while The Resurrected stays fairly close to the lines of Lovecraft's story. Chris Sarandon isn't exactly built for comedy, though he makes an excellent straight-man, and his unique style of elocution works incredibly well as his character begins to morph from one thing to another in the film. His co-stars acquit themselves adequately, but it's hard to find room to have your own performance stand out when Sarandon has successfully chewed every inch of scenery on the set.

While The Resurrected is a lot of fun, a comedy it is not, and this makes it more ordinary than extraordinary. Perfectly passable early '90s horror with some standout set pieces toward the end and a gleefully evil performance from Sarandon.

The Resurrected has only ever been on DVD in the US, but it did receive a Blu-ray release in Germany a couple of years back which was, by all accounts, dreadful. Scream Factory makes up for those shortcomings with a brand new 2K scan of the interpositive making this easily the finest A/V presentation available anywhere. The colors are rich, the image is as sharp as one might expect from mid-budget features in the late '80s-early '90s, and I have no issues recommending this video presentation. Audio is a DTS-HD MA 2.0 stereo track (erroneously labeled as 5.1 on the cover) that won't blow your mind, but does an effective job with the sound effects and dialogue.

Scream have gone above and beyond in terms of extras by adding a couple of new solid features on top of previously available material. Interviews with actress Jane Sibbet and author S. T. Joshi probe the experiences on set and the film's place in the Lovecraft oeuvre, respectively. On top of that are a number of solid archival materials like interviews with Sarandon, an audio commentary with Producers Mark Borde & Kenneth Raich, writer Brent V Friedman, FX artist Todd Masters and actor Robert Romanus, and tons of other interviews with composer Charles Band, production designer Brent Thomas, footage of the film at the Fangoria Chainsaw Awards in 1991 (featuring Bruce Campbell and Quentin Tarantino), trailers and TV spots and deleted and extended scenes round out the mix.

This is about as deluxe an edition of The Resurrected as one could possibly hope for, and I'm happy to give it a hearty recommendation. 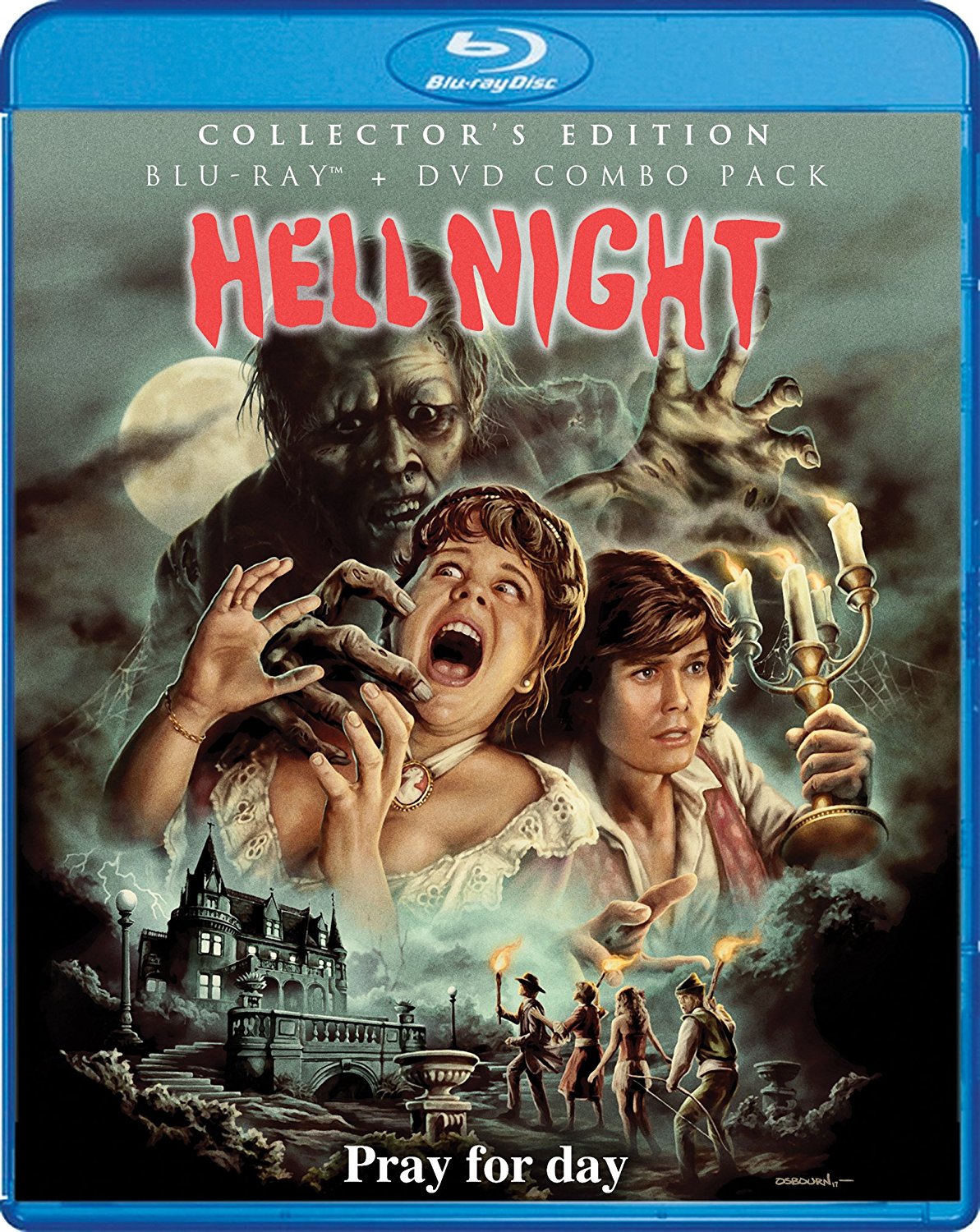 I'm not quite sure why I'd never seen Hell Night before.

In the mid to late '90s there was a boom in the home video business that lead to hundreds of cult horror films getting special edition treatment at the hands of companies like Anchor Bay. I had just gotten a driver's license, and my most frequent commuting wasn't to work, but to the local Suncoast Video in the nearby mall. I recall scouring the horror shelves for Anchor Bay clamshell cases and Hell Night was one that I saw very frequently on the shelf but for some reason never picked up.

Cut to twenty years later when the film land on my doorstep and I finally get to cross it off my (lengthy) list of films I'm ashamed of never having seen. Was it worth all the build up? Well, it's... perfectly fine.

It's Hell Night at Alpha Sigma Rho fraternity, and the pledges are forced to spend a night in the supposedly haunted Garth Manor. I'm sure you can see where this is going... The big brothers at the fraternity have rigged the estate with all sorts of frightening surprises, but when the Manor appears to have plans of its own, things get bloody. One by one the pledges begin to drop and it looks like the fuddy-duddy Marti (Linda Blair) and Jeff (Peter Barton) may be the only ones who make it out alive, but a presence in the house isn't about to let that happen on its watch. Immolation, decapitation, and desecration are all on the menu in Tom DeSimone's Hell Night

Look, there's nothing wrong with Hell Night. It's a perfectly fine horror film with some good gore and a few original ideas, but it seems to think that it's significantly better and more effective than it actually is. Some solid performances from Blair, Barton, and co-star Vincent Van Patten (a personal favorite because of his role in Rock N Roll High School) make the film enjoyable, but not much more for me. I guess that's all you really need, though, isn’t' it? It's not a gothic masterpiece by any means, but it is a fun little ghost story/Ten Little Indians supernatural slasher that has a satisfying ending.

Scream Factory presents Hell Night in its Blu-ray debut from, as the cover says, a "New 4K scan from the best archival film print". Before the film starts there is a disclaimer warning that the source materials aren't in great shape and no first generation materials seemed ot exist for the film, neither of these are precursors for the kind of miraculous restorations film fans have come ot expect in recent years, and they are right to temper expectations. Hell Night doesn't look so hot. There's a significant amount of print damage along with muddy contrast and detail and several SD sections where HD materials weren't available. This isn't as beautiful as fans might have hoped, but it sounds like it may be the best we're going to get. If you've seen the film on DVD or VHS in the past, this is certainly an upgrade, but don't expect a miracle.

Thankfully, Scream Factory more than makes up for this with a wealth of supplemental material, much of it a bit full of itself, but welcome nonetheless. We get a great interview with Blair, alongside interviews with DeSimone, Barton, Van Patten, Suki Goodwin, writer Randy Feldman, actors Kevin Brophy and Jenny Neumann, art director Steven Legler, FX breakdowns with artists Pam Peitzman and John Eggett, and a neat location visit with the director. Overall, there are well over three hours of supplementary materials on the disc, closer to five if you count the audio commentary with Blair, DeSimone, and the producers. Definifely a great collector's edition for a beloved early '80s horror.

Do you feel this content is inappropriate or infringes upon your rights? Click here to report it, or see our DMCA policy.
blu-raydan o'bannonresurrectedscream factorytom desimone