Notes on Streaming: THE CLOVERFIELD PARADOX, When Netflix Goes Nutty 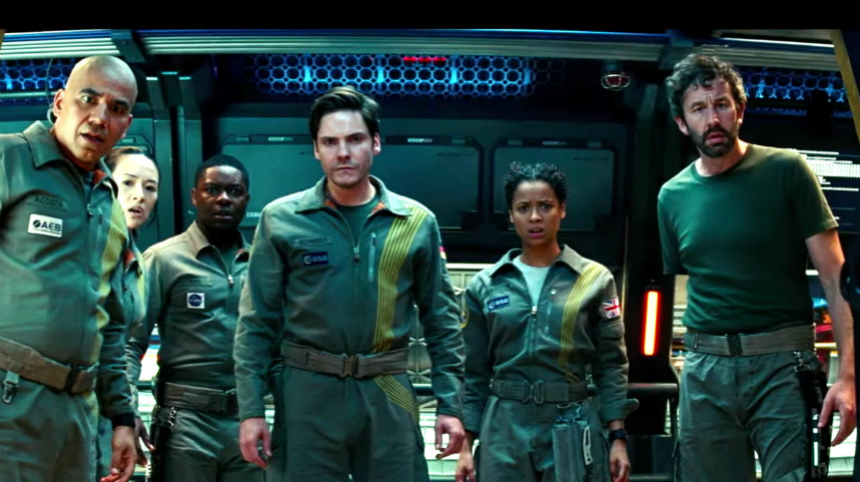 Netflix's deal to purchase worldwide streaming rights to the next Cloverfield from Paramount Pictures -- which would mean the film would not have a theatrical release, as planned -- has been brewing at least since last month's Sundance Film Festival, when Jeff Schneider of The Tracking Board reported what he'd heard.

That was quickly picked up by other trade publications and finally confirmed last night when Netflix broadcast a commercial during the Super Bowl for the newly-christened The Cloverfield Paradox. The biggest surprise was that Netflix would be making the film available immediately after the conclusion of the game.

Naturally, I watched it last night, casting aside other plans I had for this column today, and discovered that The Cloverfield Paradox is now a bit of a mess.

Two years ago, the release of the first trailer for 10 Cloverfield Lane, filmed under a different title and with no promotion as a sequel of any kind, surprised everyone with its secretive, mysterious nature. The film itself proved to be a well-acted, well-made suspense thriller with only limited ties to Cloverfield (2008) itself, driving up expectations for the next installment in the so-called 'Cloverfield Univese.'

In 2012, development on a script titled God Particle began. Production finally began after the release of 10 Cloverfield Lane in 2016. Writer Oren Uziel told Collider in May 2017 that he wasn't sure when, exactly, his original script became a Cloverfield movie, but he says rewriting took place during production. (Doug Jung is also credited as a writer on the finished project.)

As it is now, The Cloverfield Paradox feels like a perfectly fine science-fiction b-movie, for the most part. It's a thriller set on board a space station circuiting Earth until one day, Earth disappears. Borrowing liberally from other films, such as Alien, it constructs a scenario that is quite familiar, but seems genuinely enchanted by the prospect of introducing these concepts as though they were fresh.

The Cloverfield Paradox is bolstered by the high level of the cast, including Gugu Mbatha-Raw, David Oyelowo, Daniel Bruhl, John Ortiz, Chris O'Dowd, Elizabeth Debicki and Zhiyi Zhang. The diversity of the cast is, perhaps, the most remarkable feature of the movie, combined with the presence of Julius Onah in the director's chair. Truly, a film with two black actors in the lead roles and a black director should be celebrated.

Far less successful are all the awkward bits and ungainly pieces scattered throughout the film that tie it into the Cloverfield universe, which reminded me of Raymond Burr narrating Gojira: it's not needed for the primary narrative drive to succeed and serves instead as a distraction, leading to a pay-off that is, frankly, awful.

My reaction on Twitter was far more positive than most other tweets I saw last night, but I think the film works best if you can imagine it without #TheCloverfieldParadox bits and as a stand-alone b-movie with brush-stokes of elegance and distinction. In the pantheon of genre films that typically adorn the early-in-the-year release calendar. it's far from the worst thing I've ever seen, and, actually, rather typical.

Now if only Netflix could generate this kind of wide interest for all their other releases, rather than just the studio cast-offs that the service then claims as a "Netflix Original." A lot of independent films have been left to wither and die without much attention or ballyhoo (or an expensive Super Bowl TV spot). What can we do for them?

The Cloverfield Paradox is available to watch on the Netflix streaming service. Notes on Streaming is a column on the art of streaming.

Do you feel this content is inappropriate or infringes upon your rights? Click here to report it, or see our DMCA policy.
Daniel BruhlDavid OyelowoGugu Mbatha-RawJulius OnahNetflix