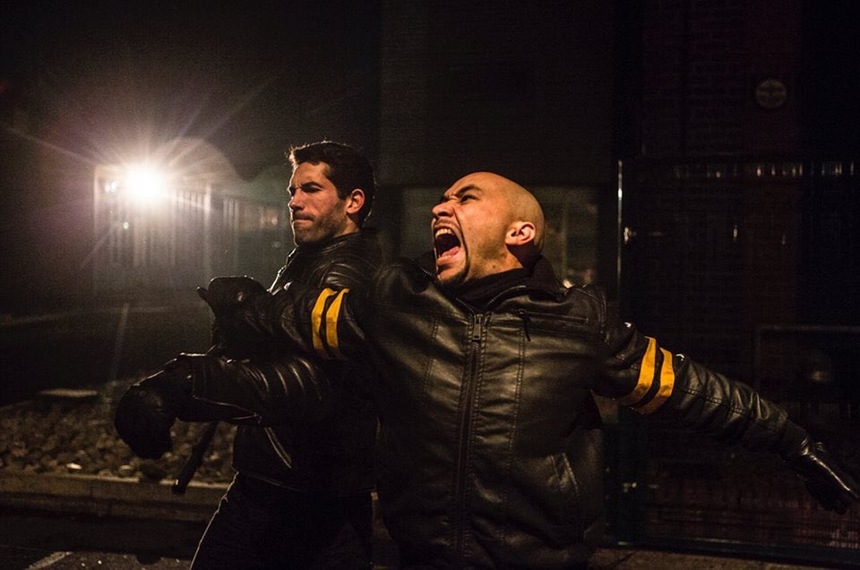 Actor and Martial Artist Scott Adkins is no stranger to comic book movies, with him making appearances in both X Men Origins: Wolverine (2009) and more recently Doctor Strange (2016). Both films didn’t exactly use Adkins to their advantage, with his role in X Men Origins: Wolverine being no more than a glorified stuntman, filling in for actor Ryan Reynolds when required.

Doctor Strange at least gave the audience a chance to see Adkins face, but other than this, his role was just another in a line of henchman that lead actor Benedict Cumberbatch has to defeat throughout the film. If nothing else, at least these films gave Adkins a chance to work in more mainstream fare.

Thankfully, Adkins own comic book vehicle, Accident Man (2018) has none of the issues of these previous ventures, featuring Adkins front and centre, with a role that takes full advantage of his talents.

Accident Man was an early 90’s comic book from writers Pat Mills and Tony Skinner. It ran in weekly comic book Toxic! until it came to an end after 24 issues. It briefly returned under Dark Horse Comics for a three issue mini-series.

The comic focused on skilled hit man Mike Fallon, who specialises in making his hits look like accidents. Fallon’s care free attitude is changed after the murder of his ex wife, with him going on a violent trail of vengeance to find the perpetrators.

The basic plot line of the film mostly stays in line with the comic, with it focusing on the murder of Fallon’s pregnant ex-girlfriend, who had left him for another woman. Fallon starts to piece things together and finds out that it was possibly his own people that were involved in the hit, leading to a larger conspiracy.

He now has to find out why she was killed, as well as having to take on numerous members of his own team, made up of the likes of Michael Jai White, Ray Park, Amy Johnston and Ray Stevenson amongst others.

There are some minor adjustments to the main role of Mike Fallon. In the comics Fallon is known to have expensive tastes as well as being quite the ladies man. Adkins take on the character is more down to earth, with him being more rough and ready than his comic counterpart, who was more of a James Bond type.

Accident Man is somewhat of a passion project for Adkins, with him stating that he was a big fan of the comic book when he was younger. He has been trying to bring the character of Mike Fallon to the screen for some time, with him writing the darkly humorous script himself.

Most fans will identify Adkins signature role of Boyka from the Undisputed franchise as his best character, but Fallon comes a close second, and if there are further films in the pipeline, could possibly even overtake Boyka.

Fallon is certainly more talkative than Boyka, with the main character of Fallon narrating his story. Unlike the majority of his DTV features, Accident Man gives Adkins a chance to speak with his own accent, using a lot of English slang which may sound strange to American audiences but this only adds to the character. Adkins gives himself many great lines throughout the film, with the dialogue being similar to the early films of Guy Ritchie.

Adkins wasn’t the sole writer on the film however, co-writing with Stu Small, who additionally makes an appearance in the film.  Accident Man is the first film to have Small as a credited writer although he did work as a script consultant on Triple Threat (2017), another upcoming Adkins and Jesse V. Johnson collaboration.

Director Jesse V. Johnson had worked with Adkins in the past, with Adkins having a small part in Pit Fighter (2000), taking on lead actor Dominiquie Vandenberg. They wouldn’t work with each other again until last year’s Savage Dog (2017), an enjoyably violent actioner that up until Accident Man was one of the director’s finest films.

Johnson started as a stunt man before moving on to becoming a stunt co-ordinator. This held him in good stead when he eventually transitioned to film directing. He has consistently transitioned between stunt work and directing since making his directing debut with The Doorman (1999), which later edited to become became The Honorable (2002).

Although working in the DTV market, Johnson’s directorial output has been of a generally high quality, with good performances and well shot action scenes.

With Accident Man, Johnson has surpassed himself, with this being his most polished and professional looking film to date, with the cinematography of Duane McClunie contributing towards this. Assisting with the overall tone of the film is Sean Murray’s excellent synth filled score, playing like a throwback from the 1980’s.

Johnson has worked with great casts in the past, with his films being filled with actors that may not get the same recognition or chances at acting parts as they have in the past, such as Eric Roberts, Don Wilson, Tom Berenger and Keith David.

Saying that, this is Johnson’s best cast to date, with Johnson giving each character ample screen time, some admittedly more than others. Both Ray Park and Michael Jai White both make an impression as Fallon’s fellow hit men, with their best scene being a terrific two on one fight scene with Adkins. They also get some hilarious dialogue, especially Jai White in one his better roles of late. Jai White will share the screen yet again with Adkins in the upcoming Triple Threat, with the two of them being on the same side this time.

The other member of the supporting cast that really makes an impression is Ray Stevenson, starring here as Big Ray. Stevenson is no stranger to action movies, most famously as the lead in Punisher: War Zone (2008), which may have not been the greatest, but showed that Stevenson could be a convincing action lead.

Stevenson’s role here doesn’t require him to take part in much action, but he is still a commanding presence. His best scenes are the flashbacks to Fallon’s childhood, where it shows how they came to meet and how he trained Fallon to become the killer he is today.

Not all of Adkins opponents in the film are men, with one of the most brutal fight sequences being between him and actress/martial artist Amy Johnston. Johnston doesn’t have a great deal of screen time in comparison to some of the other supporting cast, but makes the most of her role, being especially impressive in her action scenes.

She gives Adkins a run for his money, with the two of them not pulling any punches. It is surprising to see the hero of an action film being so brutal whilst fighting woman, but when she is as skilled as Johnston he really has no choice. Hopefully this will lead to larger roles for the talented Johnston with her already showing her talents previously in Female Fight Squad (2016) and Lady Bloodfight (2016).

The remainder of the cast are rounded out by the likes of David Paymer, Ashley Greene and Perry Benson. Fans of Boyka: Undisputed (2017) may spot man mountain Martyn Ford, who played Boyka’s terrifying final opponent. Comically Adkins beats him here with considerable ease.

As expected, Jesse V. Johnson handles the action scenes with considerable skill, with the majority of the action being of the fighting variety, with a small bit of gunplay thrown in for good measure.

Johnson is assisted in the action by the excellent Tim Man, who choreographs the film’s many fight scenes. Man has worked with Adkins previously on some of his most memorable films, most notably Ninja: Shadow of a Tear (2013) and Boyka: Undisputed.

Similar to a number of people associated with the production of Accident Man, he also worked on the upcoming Triple Threat, working as fight choreographer. As well as this he well yet again team up with Adkins on Twilight Zodiac (2018), one of Adkins many upcoming film projects.

Accident Man is out on DVD/Blu-Ray and VOD on  February the 6th (for some reason, I unexpectedly received an early copy) and I would urge any fans of Scott Adkins or action movies in general to pick up a copy and show their support. You won’t be disappointed.