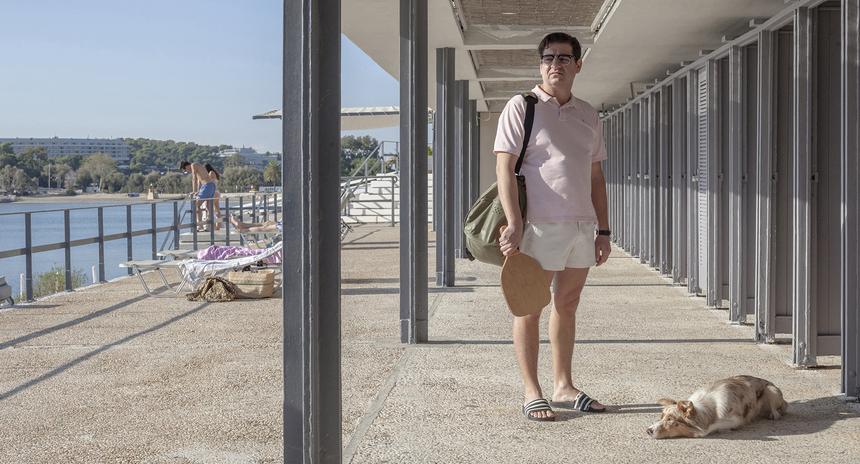 But in spite of their individual disassociation from this construct created by critics, Greek films in the last decade undeniably appear to share a tonal and aesthetic DNA, which may very well come from their national idiosyncrasies and dramatic tradition.

As the latest entry in this mind-bending catalogue, Babis Makridis' sophomore feature Pity, co-written with Oscar-nominated scribe (and Lanthimos' longtime accomplice) Efthimis Filippou, is a master class in the psychological examination of a character on the verge of restrained madness. Filippou's signature bizarreness and gallows humor is easily identifiable. Pity is the second time the writer and director join their minds for “weird” magic, Makridis’ debut, L, which also premiered at Sundance was their first collaboration.

Living in a beautiful seaside home, an unnamed middle-aged man, referred to as the Lawyer (Yannis Drakopoulos) in the press notes, has created a routine for himself following an incident that left his wife in a coma. Every morning he wakes up to have a good cry remembering his loved one’s absence. Then, the Lawyer waits by the door for his neighbor to bring him a delicious orange cake, which he in turn eats for breakfast with his teenage son, an aspiring pianist, and his dog, Cookie. The woman’s gesture is clearly tied to his wife’s condition, and he knows this.

The more is unveiled about the Lawyer’s life, the clearer it becomes that he revels in the misery that can cause others to care for him. If terrible tragedies happen to him, the reward is often attention, compassion, and unquestioned benefits. Constantly reminding others of the possibility of him never getting his wife back and becoming a widow, the Lawyer has built his current identity on other’s pity towards him. He silently craves it with increasingly dangerous desperation.

Every interaction has a deadpan sensibility that’s reminiscent of Lanthimos’ films. These are stories that develop in a slow-burning manner and gradually reveal the darkest embers beneath the luminous serenity. In the protagonist’s inexpressiveness and his polished world there is no room for major outbursts of anger, his contained malevolence brews with certain naiveté, as everything and everyone around him becomes disposable. Nothing is sacred.

Drakopoulos handles the superficially apathetic role with utmost seriousness. There is no winking here and that could make those unfamiliar with Filippou's ’ previous collaborations wonder what the appropriate reaction to the material should be. In Drakopoulos, Makridis finds an actor that accurately projects the subtle disappointments in his character’s restless and pathological pursuit of his version of love and never once breaks away from the required specificity.

The uncomfortable comedy is elicited from the absurdly deranged situations the Lawyer creates to ensure his own misfortune. Whether that means self-injury, sabotaging others, manipulating the truth to his advantage, or writing a preemptive and gruesome swan song he is eager to use at a funeral, the Lawyer’s antics fit within the world Makridis has crafted, one in which solemnity reigns and most characters live opaque lives deprived of heighted emotions.

At the office, the latest case under the Lawyer’s care is the murder of an older man in which the key piece of evidence is a yellow bicycle the perpetrator used to escape. The deceased’s heartbroken family is also added to his rotating list of useful sorrow providers, and in later the inspiration for him to obtain long-term pity.

Cleverly, internal dialogue is expressed through title cards rather than voice over, and in them he shares his findings after over-analyzing human reactions to another person’s pain.  The cunning approach he takes after his biggest nightmare, which should be a loving husband’s wish, becomes a reality is slightly predictable near the end, but nonetheless perfectly conceived. Brilliance meets unnerving straightforwardness on all fronts, including a great use of production design, which is unnoticeable for its quaint look, but precisely put into focus when a piece of art becomes relevant.

Among one of the Lawyer’s most reliable sources of sympathy is the clerk at the local drycleaner he abnormally frequents, played by Makis Papadimitriou, one of Greek’s cinema’s most popular actors. Their banter is simple, but it always leads to the Lawyer brining up his perpetual sadness, and Makis’ character consoling him multiple times a week.  Whether his suits are dirty or not, this is also part of his regimen. Rehearsed pleasantries fuel his unquenchable thirst to keep his status a victim.

This twisted pleasure of a movie is an acquired taste. Far from simplistically delicious, yet perversely humorous, Pity might force those of us who love it to justify our peculiar inclination for uncanny treats.