Robert Mockler’s debut is held back by a narrative that lacks depth, even if the film amply succeeds in terms of visual verve and strong performances. 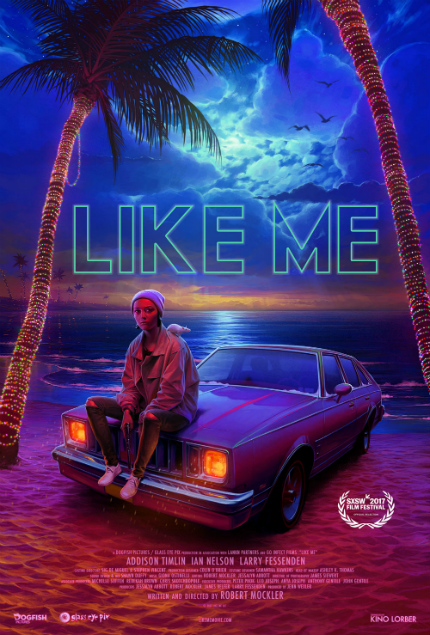 The horrors of our contemporary society are plentiful and genre films have always excelled at probing our cultural fears and discomforts.

In Robert Mockler’s debut film, the paradox of the digital media age, which allows us to connect with everyone without ever having to meet another person in the flesh, is placed on the chopping block. Like Me is off to a winning start, with an opening that ably establishes a prankster’s joy in humiliating others in the pursuit of likes and shares, before juxtaposing this setup with an avalanche of seemingly nonsensical images that risks alienating viewers from the get-go.

Nothing ventured, nothing gained, and Mockler’s striking aesthetic flair is meant to be disorienting as it comments on 21st-century modes of discourse but early scenes point to a problem with which Like Me struggles throughout: how to make a film about the attention-seeking world of social media, viral sensations and the essential hollowness of it all without succumbing to those same pitfalls as a director? How to grapple with the lack of meaning and senselessness that typifies the bulk of communication in the internet age without devolving into empty spectacle yourself?

Although never explicitly stated, these concerns also motivate Addison Timlin’s Kiya, a millennial on the quest for internet validation but also a loner seeking to form a genuine connection with another human being. Following the wildly successful upload of her convenience store ‘hold-up’, which culminates in a scared-to-death clerk pissing his pants, she gets the kudos she so desperately craves from the anonymous mass of online commenters. Among them, of course, we also find hypocritical internet trolls like Burt (Ian Nelson), who goes off on an unmerciful rant lambasting her for enabling the ‘moronification’ of our daily lives, but whose hate-speech is really just another envious bid at empty fame.

Goaded on by his vitriol Kiya goes down the road of one-upmanship. Before long she finds herself at the Lollipop Motel, in the creepy company of its owner, Marshall (Larry Fessenden). She entices him with the promise of sex but ends up entrapping him in a video shoot that involves force-feeding and vomiting. Always nonconventional, Like Me demands our attention on the sheer force of its unpredictability, even if what happens on screen resorts to the same vapid shock tactics commonly found in viral videos.

The experimental third act sees Kiya and Marshall set out on a strange road trip in search of a deeper connection, with Timlin’s character a slave to social media commenters, egged on to do physical harm to Marshall, who is ostensibly game for whatever comes his way. Like Me falls a bit flat in later scenes that opt for mood instead of narrative thrust. The unrelentingly serious tone fails to help proceedings, even though the film’s go-for-broke style remains strangely alluring.

It is in the creation of a dreamlike world full of surreal flourishes that is brought to life by a visual palette drenched in neon that Like Me really finds its groove. Yes, at times Mockler’s debut throws everything but the kitchen sink our way (including editing techniques that run the gamut from jarring non-sequiturs to inspired match cuts). And yes, the film is ostentatiously flashy to a fault but never to the extent that the formal properties match the sense of desperation conveyed by the title.

In part, style over substance is the point since superficial meaninglessness is precisely the critique the film levels at our media-obsessed society, a world in which we spend most of our waking hours behind screens, obsessed with status, and depreciating our lives in the process. Whether or not one perceives this as an instance of Mockler trying to have his cake and eat it too or applying a meta-approach to our day-to-day intake of viral media may influence your appreciation of the film. Despite not all pictures saying more than a thousand words in Like Me and quite a few of them mainly existing for the sake of their own self-absorbed, attention-grabbing flashiness, the knockout soundtrack always complements the undeniable visual flair.

Tellingly, however, the most powerful thematic resonance is found in a scene that perfectly captures how less can be more. When Kiya invites a homeless man to a lavish spread at a diner all communication grinds to a halt. She begs him to tell her a story – any story – but all either side can really muster is a series of glances in a montage of ‘wolfing down’ (the inane consumption of junk food being an apt metaphor for our appetite for online sensation and instant gratification). Rather than share his story, the homeless guy sneaks out of the diner while Kiya goes to the toilet. The scene stands as a poignant snapshot of the essential disconnect between people.

Persuasive performances across the board help keep our eyes glued to the screen. Genre favorite and indie legend Fessenden surprises by giving an offbeat character unusual emotional depth in a role that is far meatier than his recent string of cameo appearances in films like Darling, Carnage Park and The Transfiguration. Timlin, meanwhile, perfectly balances the tightrope of playing a wounded character at a loss, yearning for affection, yet always dangerously close to plummeting into the depths of full-blown narcissism that becomes a dangerous sociopath. Timlin’s mere presence carries Like Me through narrative lulls.

Buried within Like Me lies a more powerful film dealing with the same subject. As is, the message is always too on the nose and subtlety certainly gets sledgehammered by way of video responses to Kiya’s deeds. And yet, Mockler arrives as a talent to watch. Like Me is a disorienting film that manages to pack a quiet punch on its own terms by the time the end credits roll.

Do you feel this content is inappropriate or infringes upon your rights? Click here to report it, or see our DMCA policy.
Addison TimlinLarry FessendenRobert MocklerIan NelsonJeremy GardnerCrimeDrama