The hybrid genre film starts off on a familiar death note before rescuing itself with a welcome air of suggestive mystery. 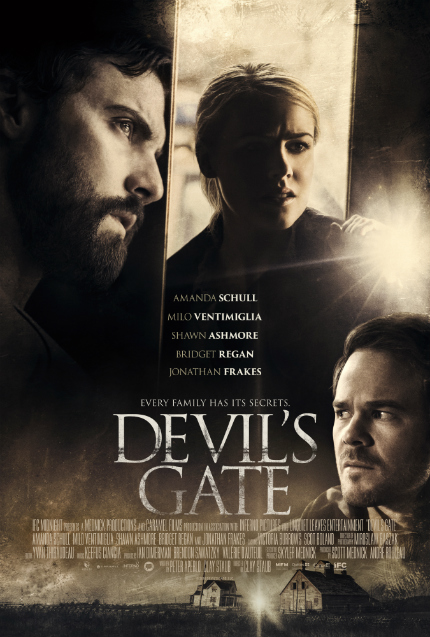 I confess to a high level of appreciation for low-budget films that defy easy categorization, such as Devil's Gate.

The opening sequence resembles that of a backwoods horror experience that will be grungy and nasty, leaving behind a trail of dead bodies and queasy stomachs. Yet even in such familiar territory, director Clay Staub deviates from the norm.

Working from an original screenplay credited to himself and Peter Aperlo, Staub tamps down the explicit bloodshed in that scene and then moves quickly to establish an atmosphere of mystery and possible suspense. This appears to be Staub's feature debut, but he has experience as a second unit director for Zack Snyder's Dawn of the Dead and 300, as well as the latest remake of The Thing.

Teasing out developments that fly in the face of expectations, Staub introduces the main players. FBI Special Agent Daria Francis (Amanda Schull) arrives in the small town of Devil's Gate, North Dakota, which is a tiny blip in the empty landscape of the state. She has come on the heels of the death with more questions than answers; it's a setup that's a bit similar to that of Wind River.

The local sheriff (Jonathan Frakes) is, of course, none too happy to see the FBI poking their nose into the business of his town. He assigns his deputy Conrad 'Colt' Salter (Shawn Ashmore) to escort her to the scene of the crime. Colt is a polite and gentle police officer who is only too happy to help Special Agent Francis.

Once they arrive at the scene of the crime, a farm owned by Jackson Pritchard (Milo Ventimiglia), it becomes clear that something very fishy is up. Jackson is belligerent and uncooperative; he has boarded up his farm house something fierce. Jackson's wife disappeared some time before, and he remains a primary suspect in Francis' eyes.

All these early events -- the first act of the film, in effect -- are set up easily by director Staub, but the emptiness of the landscape, combined with a suitably eerie musical score by Keefus Ciancia and furtive photography by Miroslaw Baszak, suggests that something more is going on than Agent Francis or Deputy Colt think.

Jackson starts babbling heatedly about other things going on and that he wants to be left alone, and the nonsense he's spitting out in such an assaultive manner begins to add up. From there, Devil's Gate takes turns that can strain credulity, partly because of the film's limited budget.

Everyone does the best they can, I am sure, but sometimes the artisitic ambition exceeds the realistic reach. Nonetheless, the film is willing to gamble on its overall narrative goals, and by that point, I was willing to suspend my disbelief.

Ashmore turns in another easygoing, likable performance, and Ventimiglia is, well, occasionally a bit less overbearing than usual, which fits the character. Amanda Schull provides a firm but flexible center, a determined and believable law enforcement character, but one with heart and humanity.

Devil's Gate is such a likable picture that its limitations diminish in memory. See it, and leave yourself open to the possibilities.

The film will open in select theaters, VOD and via digital platforms in the U.S. on Friday, January 5, via IFC Midnight.

Do you feel this content is inappropriate or infringes upon your rights? Click here to report it, or see our DMCA policy.
amanda schullclay staubhorrorifc midnightmilo ventimigliasci-fishawn ashmore