Review: CHAVELA, the Revealing Story of a Musical Maverick

A biography of the great musical artist Chavela Vargas, directed by Catherine Gund and Daresha Kyi 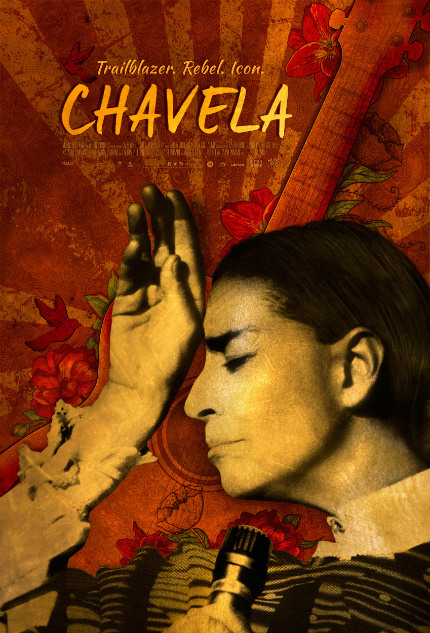 Reminding me that I don't know anything, really, Chavela is a 'music doc' that proves to be more revealing than that marketing term might imply.

Out on home video from Music Box Films today (January 2, 2018), Chavela is a biography of musical artist Chavela Vargas, who touched millions with her talents as a singer, though 'singer' only begins to suggest her interpretive abilities. According to experts (and fans) who testify to her emotional artistry, Chavela could transmit the heartfelt feelings behind the words in the songs she sang, in a direct manner that few in her field could ever approximate.

I admit to a large blind spot when it comes to Chavela's music. She performed ranchera songs which, in my mind and back to my youth, were always associated with mariachi music, which soaked into my consciousness as melodramatic and, well, not appealing, even though I am of Mexican heritage (on my mother's side). I imagine that a large part of the appeal also rests on fluency in the language, which I never learned as a child.

Be that as it may, Chavela transcends musical taste because Chavela Vargas was such a provocative cultural figure. Born in Costa Rica, she emigrated to Mexico at a young age in the 1930s and determined that she would become involved in the music industry. She faced many obstacles; the industry in Mexico (nor the rest of the world, frankly) was not eager for a women who soon began dressing in a very masculine fashion and could easily out-sing nearly any other man in sight.

She had little patience for the cultural stereotypes in place, nor for the social expectations. When she found herself attracted to women, she acted on her attractions, not really caring about the consequences. Eventually, her swelling popularity led to more opportunities and her first recording in 1961.

Chevela soared to the top but often flew alone. Her very unhappy childhood, documented here, may have led to her adult feelings about the impossibility of sustained love and relationships. Increasingly, she turned to the bottle for comfort and sustenance, and became notorious for her alcoholism, and her reliance upon it to perform. Her performing career came to an end, and she was left, withering away in a small town.

Her life had an improbable third act, however, one that is powerful and amazing to see, for those of us, like myself, who have been ignorant about this great musical artist. I'll mention Pedro Almodovar and leave it at that.

Catherine Gund and Daresha Kyi directed Chavela, which is structured in a very inviting, narrative manner for newcomers to her music. They have assembled archival footage and new interviews together extended musical performances, all nicely subtitled to make it easy to follow.

The DVD from Music Box Films includes an audio commentary by the directors, a filmmaker Q&A from the New York premiere, an interview with the filmmakers, a rare 1991 interview with Chavela herself, and a live concert performance, all of which I intend to watch and treasure over the weeks and months to come.

Do you feel this content is inappropriate or infringes upon your rights? Click here to report it, or see our DMCA policy.
Catherine GundChavela VargasDaresha Kyidocumentary