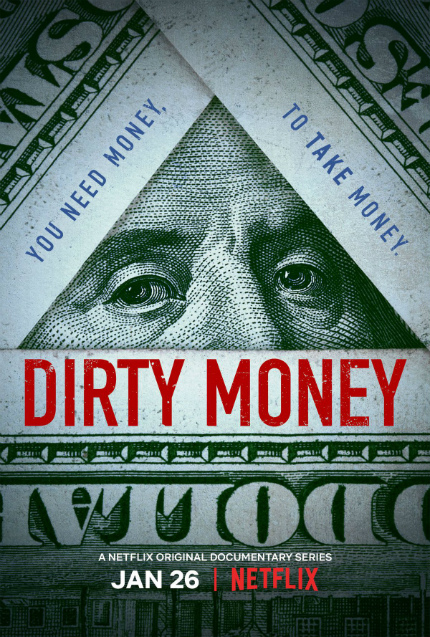 All corporations are in business to make money. Some corporations, however, manifest greed, putting the bottom line above all other considerations, such as the law, and in Dirty Money, a new series on Netflix, we have the opportunity to behold six examples of such greed.

Not all may make your blood boil. The most gentle may be on the documentary about Canadians and their love for maple syrup. (Here I note that this site was founded by a Canadian who, as far as I can tell after more than a decade of personal experience, is not a greedy person.) Directed by Brian McGinn, who recently worked on the wonderfully invigorating doc series Chef's Table and helmed Amanda Knox, The Maple Syrup Heist revolves around the robbery of maple syrup valued at US$18 million from a reserve.

That robbery raised questions in the minds of many; after all, why would anyone steal that much maple syrup? Through interviews with a journalist, an independent maple syrup farmer in Quebec, and another farmer who is very much in favor of a federation that imposes restrictions and levies fines with the goal of protecting and raising the price of maple syrup, and others, The Maple Syrup Heist appears to be quite balanced and fair, yet it's impossible not to draw personal conclusions about the influence of greed upon the decisions being made.

Much more personal for me is Payday, which explores the phenomena of companies that make ostensibly short-term loans to people who would not normally be able to get a loan at a bank. More than a decade ago, I became aware of such companies because of my own precarious financial state. Thanks to friends sharper and more knowledgeable than me, I learned to read the fine print, which revealed the devastating financial consequences that quickly accrue if the loan is not repaid in full immediately.

But many people in desperate straits don't have anyone to warn them of the possible financial dangers involved. And, in many if not all locations in the U.S., it's perfectly legal for such loans to be made, as long as full disclosure is included, even if it's written in confusing fashion in tiny fine print that few ever read. That allows those companies to make huge financial gains at the expense of the poor. Payday contrasts one man who feels he was taken advantage of with a man who rode his company to the top, financing a lavish lifestyle for years, until charges were brought against him.

The first episode of the series, Hard NOx, details the seductive deception of Volkswagen's supposedly "clean diesel" cars. Alex Gibney directed, starting from a point of personal interest; he and his wife purchased one of those vehicles, thinking they had done something good for the environment, only to learn that the company had been acting fraudulently for years.

Gibney is an experienced documentarian, known for Enron: The Smartest Guys in the Room and Taxi to the Darkside, and so he was personally motivated to investigate Volkswagen, presenting a doc with an attitude that sets the tone for the series. (The other five episodes were directed by others.) It's not normally what I would describe as "binge-worthy" material, but that tone, and the stories that are discussed are, to various degrees, quite infuriating and made me want to learn more.

Erin Lee Carr's Drug Short, for example, has Martin Shkreli as its poster child. He's the young, frequently smirking pharmaceutical company executive who raised the price of a particular drug from $13.50 to $750.00 per pill. His story might be interesting in and of itself, but instead, Carr focuses on the story behind him, and in particular, Valeant, a pharmaceuticals company that focused on mergers and acquisitions under the leadership of a new CEO. Rather than developing any new drugs itself, the company bought other companies, cut their expenses by gutting their research and development staffs, and then raised the price of their drugs, reaping huge profits, to the delight of investors.

All this was uncovered by a woman described as brilliant by those who know her; she was a trader who decided to specialize in being a "short seller" -- explaining the title -- and making her money by focusing on companies that are overvalued in the stock market. Valeant caught her eye and she dug deep into its financials. She anticipated that, eventually, the company's shady dealings would eventually come to light. Sure enough, they did ... after years of questionable conduct.

In a similar vein, Cartel Bank explores HSBC, a multinational banking goliath, and how the executive leadership has, for many years, been supporting criminal outfits by accepting their deposits and, in general, doing business with them. Various governments catch up with them periodically, admonish them, fine them what sounds like a huge sum to ordinary citizens but is only a pittance to them as an institution, and then carry on with secretive business as usual. They are "too big to fail," after all.

The final episode, The Confidence Man, directed by Fisher Stevens, is devoted to Donald J. Trump, businessman, and his many flawed, failed enterprises. I lived in New York City from 1984 to 1995, and it was a good reminder of why Trump was so familiar and so disdained. This is the episode that will resonate strongly for certain viewers, in the U.S. and beyond, and shows how far greed can get you in this country.

In whatever order the episodes are viewed, Dirty Money is an absorbing, angering series.

Notes on Streaming explore the sometimes wonderful world of streaming services. The writer is based in the U.S.

Do you feel this content is inappropriate or infringes upon your rights? Click here to report it, or see our DMCA policy.
Alex GibneyBrian McGinndocumentaryErin Lee CarrNetflix