Blu-ray Review: I, DANIEL BLAKE, a Triumph of Compassion 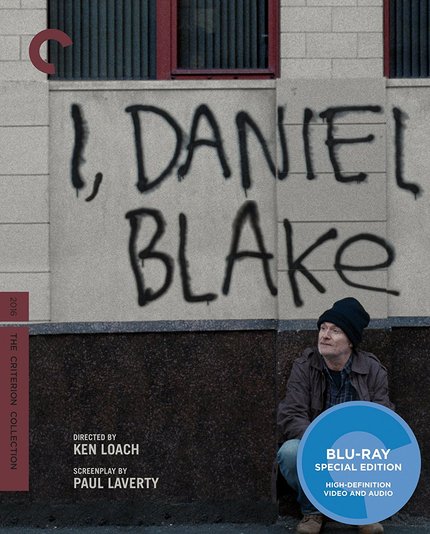 It's a bit embarrassing to admit, but before watching I, Daniel Blake for this review, I had never seen a single Ken Loach film. I hadn't been avoiding them, they had just never been in front of me at the right time. I'd heard of Loach, of course, but for whatever reason I'd never actively sought out his work. When this one came around and I read the description, I figured it was time to jump in, and this is just the kind of masterpiece that makes me want to dive into his back catalog with gusto.

Daniel Blake is a man, getting on in years, who has hit a bit of bad luck. After suffering a heart attack on the job, he's been ordered by his doctors not to go back to work because he's not yet strong enough for it. This sixty-something man, a kind soul and quick with a joke, who has never begged or asked for help in his life, now needs some support and he goes to the UK welfare system to get it.

Anyone who has been in the kind of position in which Dan finds himself knows just how tricky it can be. I'm not ashamed to admit that at various times in my life I've needed more support than I could provide for myself and I leaned on the social services here in the United States that are supposed to help me. I got lucky in that it wasn't a nightmare, though it certainly wasn't easy, but Dan has no such luck.

Deemed not sick enough for the equivalent of disability benefits, Dan is forced to go on the hunt for a job in order to get unemployment benefits. The only problem with that is that he's been forbidden from actually taking a job by his doctors, which complicates the job search. He finds himself in a nebulous void between the two services and the only way to acquire either is through a labyrinthine series of online applications - Dan doesn't know how to use a computer at all - and endless waiting games for phone calls from the "decision maker", who holds his future by the throat.

The only thing keeping Dan sane is a newly struck friendship with a young mother named Katie and her two children. The pair meet at the job center, and quickly become fast friends, the kind who have nothing in common, but would do anything for one another. Their relationship shines a light on just what a remarkable person Dan is, and makes his suffering at the hands of a bureaucracy designed to discourage all the more painful.

Ken Loach's tone in I, Daniel Blake is surprisingly light for large chunks of the film. This isn't a weepie, though there are moments that will have you reaching for a hankie, however, it is in the moments of levity in between the sadness and anger that the humanity shines through. The film is a humanitarian masterpiece, and should be required viewing for anyone looking to get into the social services, as well as a beautiful model of what empathy looks like on film. If I'd seen it last year, it would've no doubt gone on my best-of list. A superb film.

Criterion's 2K digital transfer looks and sounds great. The film's imagery and sound aren't flashy, but the disc's presentation of the material is outstanding, as one might expect.

I, Daniel Blake is presented with three main disc-based supplemental pieces, and each is well worth your time. The first is an audio commentary with Loach and longtime writer/collaborator Paul Laverty. The pair discuss not only the themes and making of the film, they also go into detail about their research and how they strived to make the film as real as possible. Many of the vignettes came straight from stories they'd heard from people in similar positions to Dan and Katie. It's enlightening and heartbreaking. There is also a 20-odd minute making of features called How to Make a Ken Loach Film which focuses on I, Daniel Blake from conception to release. Short, sweet, and to the point.

The best of the features, however, is the feature length documentary Versus: The Life and Films of Ken Loach. This 90 minute documentary follows Loach's career right back to the beginning in the mid-60s when he was already turning heads with shocking social dramas that highlighted many of the ills of the time. It talks about his triumphs and tragedies, his partnerships, his battles, and his films, all with the kind of attention to detail that brings you inside the subject. This documentary has lit a fire under me to seek out more of Loach's work to understand his point of view. If I, Daniel Blake is indicative of the kind of qualities I'll find in the rest of his work, it'll be an interesting journey.

Last up is the “booklet” essay by critic Girish Shambu. Shambu talks in detail about the film and its thematic connections to the rest of Loach's work, as well as highlighting details that viewers might miss, specifically those unfamiliar with some of the accents in the film. I actually read the essay before watching the film, and while it does mentioned a few specific details in ways that some more sensitive viewers might consider to be spoiler-y, I found that it was very helpful in preparing me to approach the film. My only wish is that Criterion would buy a freaking stapler because I'm really tired of these fold out pamphlets.

I cannot recommend I, Daniel Blake on Criterion Blu-ray highly enough. Grab it.