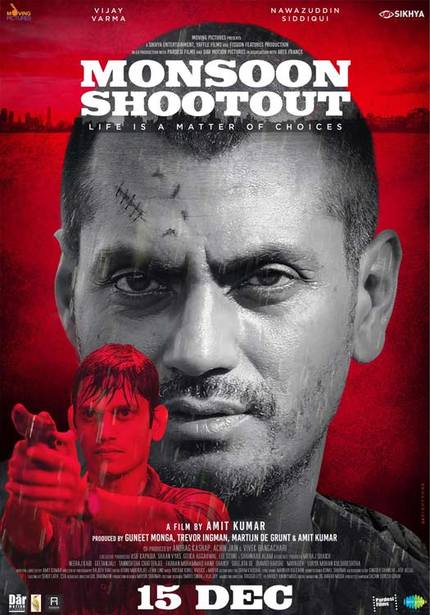 Following its world premiere at the Cannes Film Festival in 2013, it's been a long road to Indian cinema screens for Amit Kumar's Monsoon Shootout. The film, which stars Vijay Varma as a rookie cop making a fateful decision, has been looking for its opening for four and a half years now, and on December 15th, Indian audiences will finally get to see what the fuss is all about.

Varma plays Adi, a young cop in training who comes face to face with a dreaded and infamous mob enforcer named Shiva (Nawazuddin Siddiqui). The two men get caught in a monsoon showdown, and the film deals with the fallout of Adi's decisions. To shoot, or not to shoot...

Experimental in form, for sure, Monsoon Shootout was one of the most exciting films I saw in 2013, so much so that we even brought it to Fantastic Fest that year where it was well received. The film went on to play numerous other festivals around the world, but had a hard time finding just the right time and team to release it back home in India.

Peter Martin saw and reviewed the film at Fantastic Fest and had this to say:

Because of its thoughtful, searching nature, and becoming modesty, Monsoon Shootout rises above other, more conventional police dramas. The action is skillfully presented and, while it may lack the dramatic weight and ambition needed to take it to the next level, the film is a very promising debut for writer/director Amit Kumar. It raises questions that cannot be answered easily with a hail of bullets, nor washed away by a pounding storm.

In celebration of the film's long overdue release on December 15th, the team have created a unique interactive trailer. Very much in the spirit of the film, the trailer below works as a choose your own adventure mini film that puts the story in the hands of the viewer, along with the onus of the repercussions for your actions. Check it out and let us know what you think below.

Do you feel this content is inappropriate or infringes upon your rights? Click here to report it, or see our DMCA policy.
Amit KumarIndiaVijay VarmaNawazuddin SiddiquiNeeraj KabiGeetanjaliCrimeDramaThriller