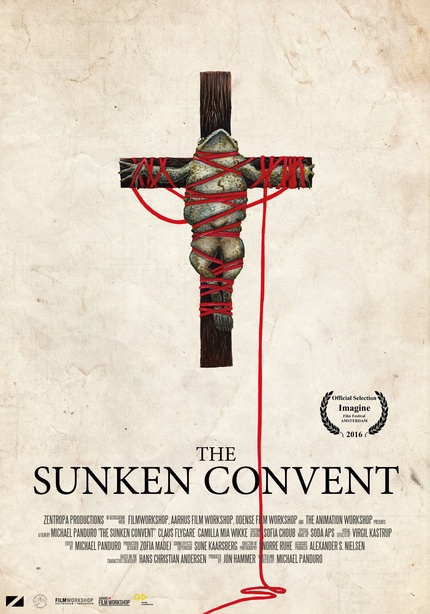 Many people - most, I might even hazard to say - believe they have a handle on the works of Hans Christian Andersen. They know him, after all, despite having never really read him, the lack of direct exposure overwhelmed by the knowledge that he was the man responsible for The Little Mermaid and The Ugly Duckiling. And there you have it! Fairy tales! Good, wholesome reading for kids!

But judging Andersen that way would be a lot by judging the work of Roald Dahl based purely on Charlie And The Chocolate Factory or The BFG. Sure, they wrote those, but there's a whole lot of other stuff that they wrote and things can skew a whole lot darker than you may expect. And when you take a story like Andersen's The Sunken Convent and put it in the hands of Danish filmmaker Michael Panduro, well ... what you get back aint no children's story. Panduro describes his own work like this:

The first time I read Hans Christian Andersen's reworking of Gottschalk's 'The Sunken
Convent', I was fascinated by the short story. It has a peculiar feeling of impending doom,
which we've tried to match in this very free adaptation.

I'm fascinated by how we as people apparently crave our own demise. How our actions
often prefer habit over logic despite sometimes fatal consequences. A great example is
our handling of the environment. Despite all our knowledge of the subject and a number
of possible solutions already established, our planet is still as doomed as it was the first
time we learned about climate change and global warming. We know how to change
things in the right direction, yet we do nothing. This paradox intrigues me.

'The Knight' in the story becomes a grotesque picture of these patterns of behaviour. A
man so stuck in old habits, that he actively weighs himself down - a self destructive
dinosaur. As such, you could say that the film is a satire on modern day apathy - a film
about how human nature will undoubtedly lead to our demise.

Impending doom and people craving their own demise ... yeah, that's going in a very particular direction. And now, following a successful festival run, Screen Anarchy is proud to present the complete short to you here. It makes for uncomfortable but compelling viewing, to put it mildly. Check out the synopsis below and then turn the volume up before getting to the film itself below that.

A man wakes up, he goes to work, he eats in, he does a bit of home surgery, he drives to
the woods. Told without words and loosely inspired by the tale by Hans Christian Andersen, 'The Sunken Convent' is a grotesque and slightly surreal story of bad habits.

Do you feel this content is inappropriate or infringes upon your rights? Click here to report it, or see our DMCA policy.
hans christian andersenmichael panduroshort filmthe sunken convent