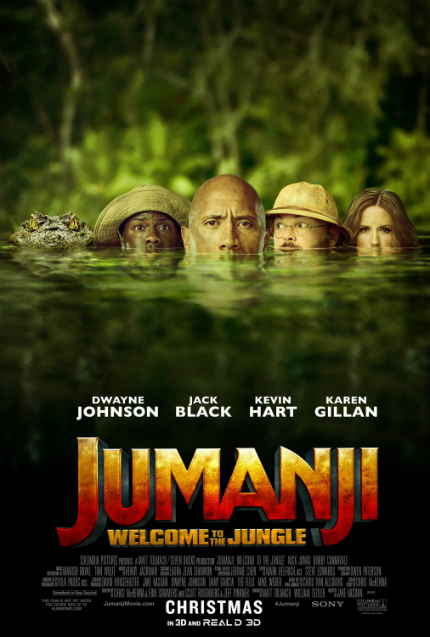 The days of direct sequels are still with us -- Star Wars: The Last Jedi begins practically at the next moment after The Force Awakens concludes -- but the major studios in Hollywood have concluded that there are other, possibly more profitable methods of bringing properties they own back to life.

Based on Chris Van Allsburg's book for children, first published in 1981, Jumanji came to the big screen in 1995 under the direction of the great Joe Johnston, a few years after his version of The Rocketeer took flight. That was followed by Zathura: A Space Adventure in 2005, directed by Jon Favreau, sometimes described as a 'spiritual sequel.'

I've not read the book or seen those movies, so Jumanji: Welcome to the Jungle seems as though it was designed specifically with me in mind! After a mildly mysterious prelude, the film then introduces four teenagers who hew closely to stereotypes, two boys (a studious nerd and a burly athlete) and two girls (a self-involved beauty and a shy geek-type).

They are sentenced to detention, Breakfast Club-style, stumble upon Jumanji, an old video game, select characters to play and, presto! They are sucked inside the game, where they discover that they have been transformed into the characters they chose rather capriciously.

Jake Kasdan began his feature career with Zero Effect, Orange County, The TV Set, Walk Hard: The Dewey Cox Story and Bad Teacher (my review here). Those five films established him as a director with "his own comic sensibility: sometimes crude, sometimes lewd, sometimes gentle and direct, yet always sincere and true to the weird essence that inhabits and motivates his characters."

But his last feature, Sex Tape was a sour misstep, like milk gone bad. Jumanji: Welcome to the Jungle is somewhat of a recovery -- the lead characters are winningly awkward and weird and feel true to their inner selves, as teenagers who are still years away from fully maturing as adults -- yet the narrative is unwieldy, filled with many predictable, repetitive moments that grow tiresome over the length of the 119-minute running time.

In the game, the studious geek and the burly athlete switch body types, as it were, transforming into Dwayne Johnson and Kevin Hart, respectively, while the self-involved beauty and the shy, geeky girl find themselves embodied by Jack Black and Karen Gillan, respectively. As might be expected, the actors have a lot of fun with their characterizations.

Johnson and Hart previously displayed their gentle comic chemistry together in Central Intelligence. The teaming of Black and Gillan is not as successful, but that's more owing to the script, which struggles to find meaning beneath the obvious.

Jumanji: Welcome to the Jungle succeeds as a family adventure with broad appeal, eschewing profanity and explicit bloodshed (despite the many, many dead bodies that accumulate). The comedy is aimed low and hits its easy targets early and often. When it aims for something deeper, it comes up short and obvious.

The film opens wide in theaters across Canada and the U.S. on Wednesday, December 20.

Do you feel this content is inappropriate or infringes upon your rights? Click here to report it, or see our DMCA policy.
Dwayne JohnsonJack BlackJake KasdanKaren GillanKevin Hart

More about Jumanji Welcome to the Jungle