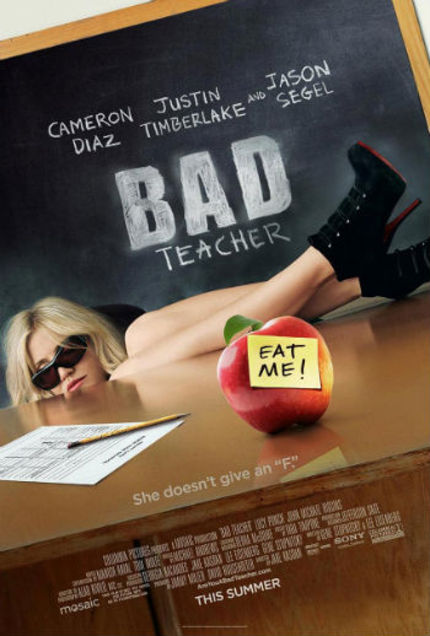 Elizabeth Halsey is a tall drink of water. And just as transparent.

As played by Cameron Diaz in the very funny Bad Teacher, Elizabeth is a fit 30-something who's gone to seed. Oh, she may look like a former fashion model, but the emphasis is on former. Years of late nights, drinking, and recreational drug use have dulled her personality and exposed her least desirable traits. She's never sought a career for professional fulfillment, nor a home and family to satisfy her domestic instincts. Instead, she needs a sugar daddy, someone to pay for all her materialistic wants, enabling her to do nothing all day long.

She experiences a brief hiccup in her life plan when her fiancé breaks their engagement. Her escape from teaching 7th grade is thus foiled, and she must return to a job she hates. Almost immediately, however, another opportunity presents itself, in the person of Scott Delacorte (Justin Timberlake), an unattached substitute teacher. He wears an expensive watch and drives an expensive sports car, which is sufficient for Elizabeth to decide that he's marriage material.

On equally thin evidence, she decides that Scott is only attracted to women with large breasts, and so decides to have breast enhancement surgery. To pay for it, she must use all her ingenuity -- and body parts -- to raise $10,000 before the school year is over.

Bad Teacher is filled with cheerful profanity, contains a modicum of bawdiness, and is not above a cheap, auditory toilet joke. Casual drug use is never frowned upon, nor is the idea of using sex to get what one wants. The concepts of "working hard to better one's station in life" or "improving one's self through education" are never seriously entertained. Socrates may have said, "The unexamined life is not worth living," but Elizabeth declares, "I don't give a fuck."

Underneath all that surface crudity, however, Bad Teacher is a well-composed, character-based comedy that eschews sentimentality in favor of cynical acceptance. Elizabeth may not be an exemplary person in the eyes of many, but she's fine with who she is. As a former school hottie, her entire life has been based on her looks. Men of all ages still respond to her based on her physical appearance, so she responds in kind. In the 21st Century, it's a regressive viewpoint, but let's not pretend that such women do not exist.

Elizabeth doesn't pretend to be someone she's not, something she holds in common with most of her colleagues and students at John Adams Middle School, located in a suburban area somewhere near Chicago. That's John Hughes territory, and while Bad Teacher never draws any direct comparisons, it's easy enough to imagine the students in Elizabeth's class, aged 13 or so, eventually attending John Hughes High School. Elizabeth herself might have graduated from there; she would have been the shallow, bitchy beauty who looked down on the geeks and nerds.

In her quest to win Scott's affections, and presumed fortune, Elizabeth faces competition. Amy Squirrel (Lucy Punch) is lovely, and well-regarded as a teacher, but a little bit odd in her attempts to engage with her students; she appears to have no sense of what's appropriate or funny. Still, she tries, darn it, she tries.

Gym teacher Russell Gettis (Jason Segel) lurks constantly nearby, biding his time in his attempt to win over Elizabeth -- though it's not apparent why he's so persistent. Sad sack teacher Lynn (Phyllis Smith, from The Office) is Elizabeth's friendliest colleague, always available to provide a softly-delivered punch line. Principal Wally Snur is played by John Michael Higgins, who provides reliable support.

The supporting cast, including Elizabeth's students, bit players and extras, are allowed space to make tiny impressions without overstaying their welcome. In this aspect (and no other), Bad Teacher recalls the films of Preston Sturges, who often gave the funniest punch lines to the least likely bystander. Jake Kasdan, who directed, has a superb sense of comic timing, a credit that should be shared with Tara Timpone, who has edited all of Kasdan's feature films. Gene Stupnitsky and Lee Eisenberg provide plenty of one-liners and a good framework in their screenplay.

None of the actors do much that is truly unexpected, though Lucy Punch's flexible ability to switch from physical to verbal humor deserves to be singled out, and Justin Timberlake's one-note range is a bit disappointing. But there is something to be said for keeping actors in their comfort zone, allowing them to do what they do best, and meshing it together with less-experienced performers and a star turn by Diaz.

That all points back to Kasdan, who has proved now over five feature films that he has his own comic sensibility: sometimes crude, sometimes lewd, sometimes gentle and direct, yet always sincere and true to the weird essence that inhabits and motivates his characters.