MMFF 2017 Review: ANG LARAWAN Makes You Feel the Passion Beyond Its Insularity 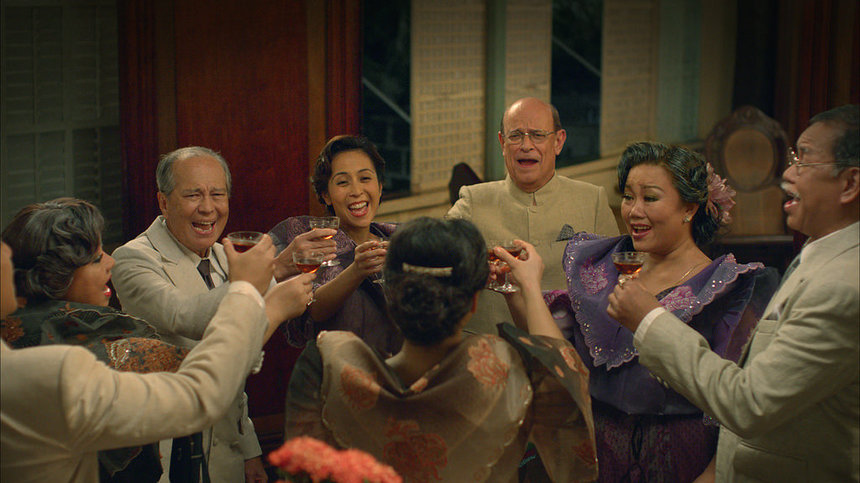 There are projects that beyond their flaws you’ve got to praise for brazenness, the amount of love put into their creation. There’s this air of faith, of passion, that permeates all aspects, smoothening out whatever rough patches the material may have. Ang Larawan is this sort of project.

Ang Larawan, right off the bat, is notable for the sheer amount of talent behind it. A screen adaptation of National Artist Rolando Tinio’s play — in itself also an adaptation of the work of another National Artist, Nick Joaquin’s A Portrait of the Artist as Filipino — the film boasts direction from Broadway production designer-turned-director Loy Arcenas, an ensemble of celebrated actors and actresses from both stage and screen, and music from the Philippines’ foremost maestro Ryan Cayabyab.

It is a film that basks in prestige and on the sensory level it is quite the cleansing experience. For one, it’s refreshing to see a musical, a now rare genre in Philippine cinema, competing in a festival whose regulars are “family friendly” comedies, horror films, and rom-coms. Secondly, a film that revels in its artistic merit and dwells on the theme of art over commerce in the Metro Manila Film Festival is a brave and timely act of provocation given the continuing controversy surrounding the fest.

The passion for Nick Joaquin’s work is felt as the reverence held for the source material is palpable. Ang Larawan doesn’t stray far away from the original, and thus it similarly carries the story of the Marasigan Sisters, Candida (Joanna Ampil) and Paula (Rachel Alejandro), spinsters who lived in Manila’s walled city, Intramuros, during the dawn of World War II. The conflict of their tale revolves around the siblings' refusal to sell the last masterpiece of their father, a renowned painter of the Spanish era, as it is a gift made especially for them. Amidst duress coming from financial instability, the lack of career options for women (particularly single women) in the 40s, and the sisters’ older siblings pressuring them to sell the house, the two remain steadfast in their declaration of the painting not being for sale. It is through this story that questions on art and commerce, old vs. new, idealism vs. pragmatism, and, more all-encompassing, national identity arise.

The meticulousness of Ang Larawan’s crafting is in itself is an act of love. Performances, production design, and, of course, the music carries this affection as all the above mentioned bring their A-game on screen. They go above and beyond the required, and you can’t help but admire the grandeur exhibited. But, on the other hand, this grandeur also works as a double-edged sword as I feel that the extravaganza overpowers the themes, most especially their nuances, leading to Ang Larawan’s commentary to appear a bit too insular — which can easily be misconstrued as too privileged.

Ang Larawan by scaling things up — crescendoing music around every corner, making each scene feel like an emotional high point — glosses over the intricacies it could contain. Librettos, as well, feel prolonged and too wordy when they could have instead been delivered via dialogue to its full efficacy. This focus on spectacle confines the film’s embedded themes into the binary; the message becomes a reduction: art can be chosen over commerce, and idealism can trump pragmatism, all you need is to stick to a contra mundum attitude.

Nick Joaquin, by virtue of the source material’s full name — A Portrait of the Artist as Filipino: An Elegy in Three Scenes, an elegy, meaning a lamentation — injected nuances to make his literary play feel not entirely like a celebration but to also carry the weight of frustration. Not just frustration on art vs. commerce but frustration, via the lens of the upper-to-middle class, on art’s role in nationalism and cultural preservation amidst changing tastes, commercialism, and just sheer utter disregard. Come the film's resolution, things can feel a bit one-note because of this loss of shading. (HIGHLIGHT FOR SPOILERS: Candida and Paula’s financial woes are eventually addressed by their father’s friends giving them money. Easily a message of privilege without proper contextualization.)

If this overpowering of the subtext is shared with the original stage adaptation, I wouldn’t know. Though the respect for source material can be admirable, Ang Larawan’s firm adherence results in a demonstrably safe adaptation. It’s quite a regret that it doesn’t exhaust the visual medium, augmenting the material to add new meaning. What’s conveyed through words in books and on stages don’t always carry over on film. It needs to be reinforced through inspired direction, showing on top of telling.

Arcenas’ direction shines though when it chooses to focus on characters, when it zeroes in on more intimate moments. What are often stereotypes are given depth (though a bit too late in the game). Performances are also made incredibly potent when they’re shown in close-up — an advantage over the theater. Joanna Ampil is a revelation in her first lead role as she showcases her West End renown as she easily jumps back and forth between the opposite ends of the emotional spectrum. Robert Arevalo also brings the gravitas as the senator Don Perico, an ex-poet who suffers from a bout of guilt after he’s questioned on how he exchanged his passions for the promise of a more comfortable life.

For what it's worth, the broad strokes of Ang Larawan’s message may just be adequate enough to steer the uninitiated towards the right directions. Once past that, the passion permeating throughout the film makes the overall product quite enjoyable. And given time to think about, maybe even if it is in its most basic form, the question Ang Larawan positions may be timelier now more than ever. How will art strive in a world dominated by commerce? This Metro Manila Film Festival, I too would want to know.