Review: KALEIDOSCOPE Is Beautiful and Fragmented 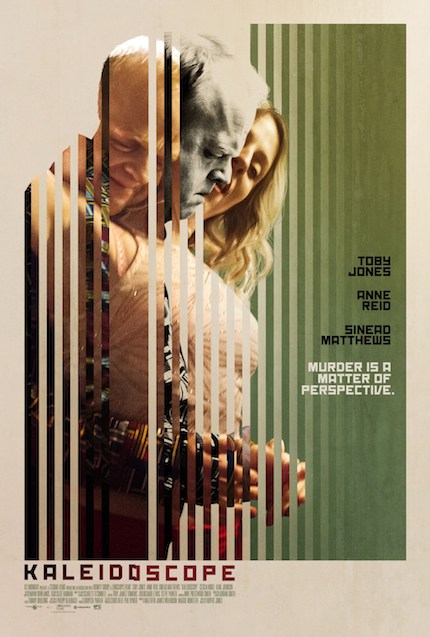 Lots of mentally fragile guys are obsessed with their mothers, especially when it comes to cinematic tropes. Of course, there's Psycho, a giant of a film and a close cousin to Rupert Jones' debut feature, Kaleidoscope.

Out today on VOD and in select theatres from IFC Midnight, Kaleidoscope is the tale of an ex-con who's having trouble re-integrating into society. Jones' brother, the always-terrific Toby Jones (Harry Potter, Atomic Blonde, The Hunger Games, Berberian Sound Studio), plays the disturbed man Carl, who we follow through his apartment, some memories, and perhaps misremembered events. Elements of Psycho echo within Kaleidoscope, but so too does Stanley Kubrick's masterful The Shining, Roman Polanski's The Tenant, and Spider (David Cronenberg's 2007 film centering on a schizophrenic man also re-entering society played by Ralph Fiennes).

Carl meets up with Abby (Sinead Matthews) for a blind date or hook up --- and end up at his place for a nightcap. Next thing you know, she's dead and Carl's domineering mom (Anne Reid) who knows certain very interesting things about his past shows up. We never learn what these things might be; is Carl a serial killer? Did she help cover for him? Who knows? Like so, the events leading to Abby's death flash back and forth in jumbles, but with such an unreliable character in Carl, it's clear that there are many things that are just in his head.

Out of the gate, Jones is a director to watch. Not only are the performances great (because of course they are --- look at his cast) but there are other reasons on display. The moody cinematography (by Philipp Blaubach) in Kaleidoscope is downright gorgeous to look at, and the sound design is just as great --- complex in layers and hidden meanings that allude to ominous portents. There's an interesting scene in which Carl's father appears at his kitchen table, blood sliding down from an unseen wound on his head. It could be that he was murdered by Carl's mother, or maybe Carl, or them both. We'll never know.

Sadly, we've seen this story before, and so as much as Kaleidoscope is ambitious --- especially on what was probably a limited budget --- the film is a bit predictable. It's also a very slow burn of a film, and that will no doubt create frustration for some viewers. Check out the trailer below.

Do you feel this content is inappropriate or infringes upon your rights? Click here to report it, or see our DMCA policy.
Anne ReidIFC MidnightKaleidoscopeRupert JonesSinead MatthewsToby Jones