Review: ANGELICA, Sex, Or The Lack Thereof, Ectoplasmic Visions and Hysteria In A Victorian Gothic 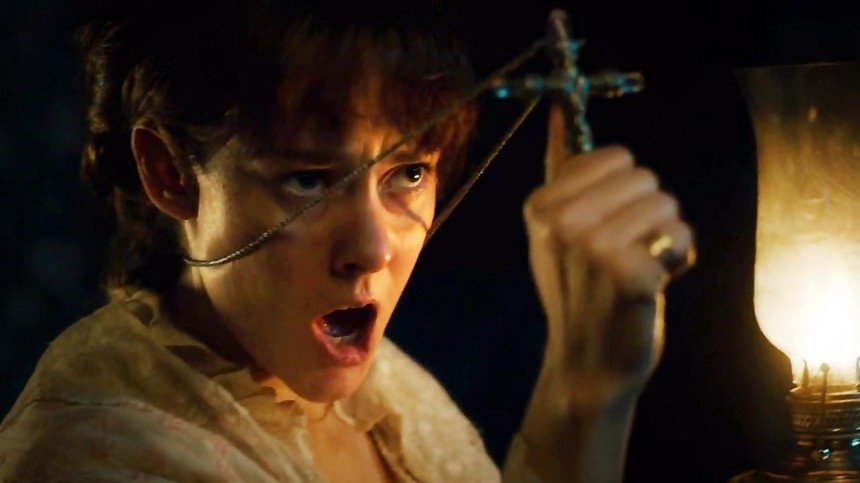 After the initial unveiling at Berlinale Panorama 2015, writer-director-producer-actor Mitchell Lichtenstein´s third writing-directing feature effort, Angelica, got a limited released on the U.S. soil just recently. Based on the 2007 novel by Arthur Phillips of the same name, Lichtenstein plunges into the dark nooks and crannies of a creaky Victorian house and female mind, where supernatural and threatening phenomena take place. At least according to the film´s protagonist Constance, played by Jena Malone doubling also as the daughter of Constance, the eponymous Angelica.

Lichtenstein, a son of the pop art icon, charmed his way into hearts of many viewers through indie fable Teeth, drastically empowering the female protagonist (to her chagrin) as the story was based on the myth of vagina dentata. In Angelica, he returns to the topic of female sexual repression and its consequences, albeit this time more open for doubting.

The film opens with Angelica, a stage actress, being swiftly ushered to her mother Constance's bedside as she has an urgent confession to make. The cry to be heard revolves around Angelica´s long lost father. The Benjamin-Button-like framing recalls the intensive love of young and naïve stationery seller Constance, and dr. Joseph Barton, a respected scientist.

The class difference and scorn of Victorian upper circles at a seller marrying into a wealthy environment aside, the inexperient Constance suffers several miscarriages, until the well-longed child sees the light of the world through a complicated delivery. Even though Angelica gets safely out, she brought a toll upon the Barton´s marriage – the pleasure should be found elsewhere – according to a good doctor´s enlightened advice.

As Dangerous Method and Hysteria openly conveyed, life and especially sex life on the turn of the century was different before the arrival of dr. Freud. Thus Angelica unspools as a psychosexual ordeal, while hysteria and repression wreak havoc over Barton´s marriage, household and Constance´s mind. Anxious mothering and gripping paranoia substitute the conjugal relief. To add insult to the injury, Constance believes a sleazy ectoplasm, residing in her daughter´s wardrobe, plots to violate her innocent and unsuspecting child.

Sexual frustration played a great part in Teeth, however here Lichtenstein inspects the tribulation of a Victorian woman, at a time when superstition replaced scientific explanation and reason on a daily basis. Constance lives in a golden cage, and thus has all the time to wallow in her hysteria, whereas her husband works tirelessly in an underground laboratory, gruesomely vivisecting living animals. At least this is the picture Constance witnessed, and a notion she harnesses of her husband´s day job. Constances´s misandry dances tango with Victorian misogyny and Lichtenstein does not hesitate to take a few stabs at the polarized society.

A clear dichotomy and stereotypes permeate the putrid air of Victorian society, on female and male side alike. Nevertheless, Lichtenstein centers on Constance´s psychosomatic misfortune(s) and her struggle to take grasp of reality, while remaining pathologically overprotecting of her daughter. After a couple of hysteric attacks, the keyword Bedlam enters the discussion. Her psychological condition receives the self-ordained treatment from a local charlatan with a dose of ringing home-exorcism.

Angelica brings to mind a slightly twisted female gothic popularized by Shirley Jackson, and the genre of supernatural Gothic seems a more than well-fitted for the topic and plot structure. The producer-writer-director sticks to the original setting of Arthur Phillips, his work compared by many to Henry James, and the compliment descends naturally unto Lichtenstein while he does not conceal his ongoing curiosity about female sexual repression.

On the note of repressed sexuality, the explicit approach he fostered in Teeth turned the film into an amusing fable. He continues nurturing this strategy in the costume drama along all social circumstances it bears, along molding the final outcome into a supernatural/soft-horror drama.

During the process of transfer from pages unto screen, the plot coagulated from two narrative, point-of-view, strands into a single one, which Lichtenstein keeps ambiguous, unlike in the Phillips´ book. The uncertainty does not translate through odd visions and the air of paranormal, but through the unreliable narrator. The book´s multiple-viewpoint yields deeper psychological perspective, while the discovering of the narrator´s identity is a part of the reading experience. Lichtenstein acknowledges the identity of the narrator in the prologue flat and plain, and the degree of veracity of her retelling gets tainted by her worsening states of mind and judgment.

The main dilemma rises from Lichtenstein choice on how to frame the whole Barton´s household situation. Amid the sexual repression on one side, sexual pressure and brimming desire on the other, the writer-director throws a curveball of implicit-explicit, and rather a Freudian, hint. The one that would fully justified Constance´s actions, and to which the whole situation of bedridden Constance confessing to Angelica would naturally lead, whilst retaining a solid reason to not regard Constance as a rambling madwoman.

In the book, dr. Joseph gets his own space and voice, and thus his perspective in the narrative is empowered enough to shed more light on Constance´s behaviour, and basically his defense that he is not as inhuman as his wife claims to be, while confirming the assumption that she is not that sane as she thinks so at the same time. The Gordian knot of she-said-he-said in the book eventually feels the cutting blade, though Lichtenstein withholds the pleasure of closed narrative in his take.

In the context of Lichtenstein´s own filmography, Angelica certainly possesses a special place as a rite of passage to high-concept filmmaking. After the happy introduction via Teeth and a swift graduation by directing Demi Moore in his sophomore feature Happy Tears, his latest feature-length oeuvre as a lush costume ghost story (Lichtenstein revealed he was attracted to set up a “Masterpiece Theater” world) looks more expensive while Mike Leigh´s cinematographer Dick Pope who, atmospherically and true to the source, lensed Mr. Turner enhances the film´s crisp and Victorian appearance.

Sex, or the lack thereof, visions and hysteria in Lichtenstein´s slow-burning Victorian gothic, all work as in the home invasion subgenre (albeit transferred on the protagonist´s mind), and follow a downward spiral of hysteria and paralyzing paranoia with a rich inventory of phallic symbols. Even though Lichtenstein still keeps one foot in genre filmmaking and storytelling, Angelica indicates the other one is already thrust into another, more ambitious and potentially not-genre, door.