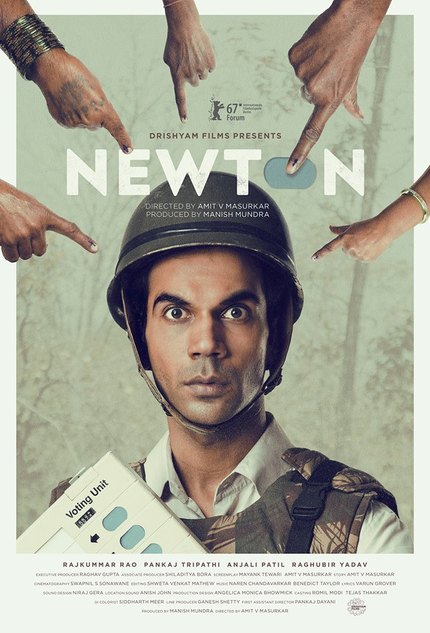 Director Amit V Marsurkar burst onto the filmmaking scene in India back in 2013 with his debut feature, Sulemani Keeda (Writers). That film, the story of a pair of nobodies trying to break into Bollywood as screenwriters was regarded as one of the most promising independents of the year.

It's certainly an entertaining film, but for all of its insight and acerbic wit in skewering the Bollywood studio system, the film was a rather slight affair. Marsurkar certainly showed a talent for writing, but his choice of topic was a bit too on-the-nose for most to really get a sense if he was able to translate this savage tongue to bigger projects, but here we are with his latest film Newton, and it is clear that Masurkar is the real deal.

With a population of approximately 1.2 billion citizens (and rising), India is the world's largest democracy. It is also one of the most fractured nations in the world with its population split along hundreds of cultural and language barriers that keep the prospect of a single governing body able to represent the best interests of this massive and diverse nation a bit of a pipe dream. However, that's not going to stop Newton, a mild-mannered bureaucrat who serves as an election official in reserve for the nation's newest round of voting.

When a first-stringer takes a knee upon hearing that his post will be in the communist rebel occupied forest of Chhattisgarh, Newton steps up and takes on the responsibility of leading a small crew into the jungles to set up a polling booth for 70ish locals who have no interest in voting and no knowledge of their candidates. Not only are the locals disinterested - they have laws and leaders who have served them well for centuries and have little to no need for outside interference - there is also the constant threat of Maoist insurgents taking revenge on them for participating in a government that they feel doesn't serve them.

Newton will not be deterred, though, and in spite of numerous warnings from his military escort, he insists on doing everything by the book, giving these villagers the opportunity to cast their votes. Rajkummar Rao (Shahid, Omerta, Aligarh, Kai Po Che) plays Newton with wide-eyed optimism. His Newton isn't exactly an evangelist for the process, but a dyed-in-the-wool bureaucrat determined to follow the rules and get the job done. This sets up conflicts with all and sundry as his military escort, led by the scenery chewing Pankaj Tripathi as Aatma Singh, actively seeks to dissuade, discourage, and destroy his project so they can go back home and hide from the rebels breathing down their necks.

The interplay between Rao and Tripathi is wickedly fun to admire as both are master character actors given a real opportunity to breathe life into characters that most performers would kill for. While Rao has played the heartthrob in numerous films over the last five years, it is his performances in supporting and character roles like Aligarh, Shahid, Trapped, and City Lights that have truly put him atop the heap of young Bollywood talent. Tripathi, on the other hand, has always been an actor's actor, working in character roles and stealing scenes from higher profile stars throughout his relatively young career. The two of them are like fire and ice in Newton, and the chemistry is fantastic.

There is a kind of dogged determination in Newton's work that is admirable, if at times stupefying. His interests are not in the victory of one candidate over another, nor even the victory of democracy over apathy (though it comes close to this at times), his interest is in maintaining the system of laws and procedures that make his life and his world orderly, and the right and responsibility to vote is one of them. He doesn't care if he's in the middle of a war torn jungle or a roadside cafe, he's determined to do his job, at the cost of his own safety for the good of the nation.

Newton is a small feature. A relatively small cast populates the film for the vast majority of the run time, the sets and locations feel real and lived in, and the focus of the story is laser sharp. However, Marsurkar has managed to write and direct the film in such a way that, even though the context is very specifically Indian, it easily reaches beyond its setting and could get the world talking. Even though it's a dark comedy and a satire, the actions, words, and characters are not that far from the truth, and perhaps it is easier to relate to them because they are a little bit left of center.

Recently selected as India's submission to the Academy Awards for 2017, Newton is poised to make a bigger splash than many of its predecessors in that game simply because of its ability to relate on a human level. Masurkar's characters are very human. In their foibles, their obsessions, and their passions, the men and women of Newton are us. Perhaps at times a nobler us, but us all the same, and a reminder that it doesn't take a hero to make a difference.

Do you feel this content is inappropriate or infringes upon your rights? Click here to report it, or see our DMCA policy.
AFI FestAmir V MarsurkarIndiaRajkummar Rao