Warsaw 2017 Review: FIND THIS DUMB LITTLE BITCH AND THROW HER INTO A RIVER, a Viral Video Gone Bad 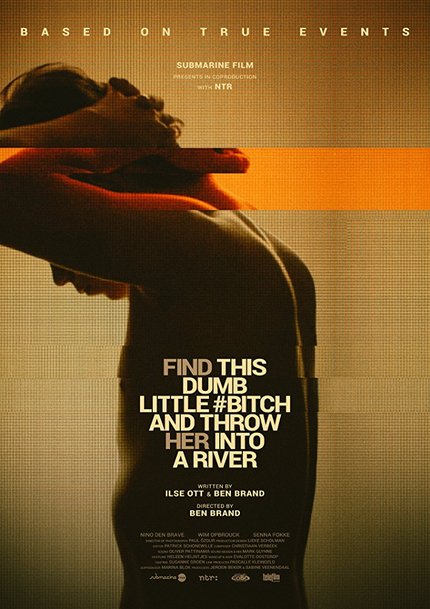 Actions bear consequences, therefore they have to be performed responsibly. It's hardly a novel idea, although the new digital era and its possibilities caught many youngsters unprepared and proved their lack of basic understanding of consequences.

The debut feature by Dutch writer-director Ben Brand, mouthfully titled Find This Dumb Little Bitch and Throw Her Into A River (Vind die domme trut en gooi haar in de rivier), brings a digital-day morality with a finesse of Michael Haneke, and is not only for young adults.

Brand, inspired by a real-life incident, prepared a narrative framework along with scriptwriter and actress Ilse Ott, and they reached for a coming-of-age template. More precisely, certain coming-of-age conventions serve as a cocoon for investigating the collective mindscape of the present young generation.

The basic set-up constitutes of a single father running an illicit business selling imported puppies. His two kids, 15-year-old Remco and 13-year-old Lizzy, give him a hand, although both have a clear vision of their future: instant, almost ready-made, fame, both Internet fame and fame propelled by participation in a talent show. Both eventualities somehow epitomize Generation Z and the ordeal of growing up as a digital native while hoping for a better life.

While Remco seeks the admiration of thousands of anonymous followers on a video platform, his sister readies for a singing audition, hoping to get on the small screen. Remco becomes the primary point-of-view. Motherless and emotionally neglected by his father, he pursues appraisal elsewhere, finding compensation among internet cohorts and his peers. Such prospects make way for a portrait of a sociopath as a young man. Nevertheless, Brand controls the narrative carefully so it does not veer towards muddier psycho-theatre than necessary for the ultimate message.

As a different generation and virtually a luddite, Remco's father, as a digital illiterate, cannot guide nor protect him from the seductive lure and crushing menace of the cyber-jungle. Unaware of the myriad of permutations of how something might easily backfire with unexpected power and extent, Remco shoots and, in a poorly thought-through bid for attention, posts a video in which his giggling sister throws sick yet alive puppies into a river, thus generating a veil of wicked sadism and creating a highly combustible video.

After a while, it goes viral and to Remco's astonishment, the dam of cries for blood and casual death threats opens widely and uncontrollably. The real story goes that the engaged folk of 4chan did the investigative heavy lifting, piecing together scarce clues. They led the hunt -- Michael Bay chipped in a donation of $50,000 -- which grew into a full-blown persecution emerging from a hive mind of an internet version of a torches and pitchfork-wielding mob. Ott and Brand omit this episode that would promote the wrong kind of popularization of the infamous message board. Instead, they build a rising tension of wrath experienced in the real world, rather than in the digital environment.

The coming-of-age configuration eventually reshuffles into a social thriller of the Hanekenian breed. Following the accumulating infamy around the video, Remco initially hopes that the heat will blow over. However, the haunting specter of abusive comments under the video turns into an enraged crowd chasing the protagonist and his sister in their vicinity.

The collective mind of the mob, peers from their generation, clouded by a self-proclaimed righteous anger and thirst for justice commits the exact sin Remco carried out in his naïveté -- the underestimation of the concept of consequences. Find This Dumb Little Bitch and Throw Her Into A River gradually changes mood from emphatic strokes in a generational portrait of a certain social demographics to a chilling demonstration of a collective conscious and its untamed id.

Even though the actual puppy-drowning incident remains backgrounded while the writers keep the shady and cruel business of cute puppy-trafficking in the third plane, the director's moral standpoint remains clearly channeled on the screen. Brand emphasizes the focus on the intensive drama of an individual versus a crowd and its dynamics.

In addition, he complicates the relation between viewer and protagonists, perpetrators and victims in their own right, on a push-pull basis of empathy and reproach, carving the kind of detachment necessary to digest such a story while navigating an ethnical minefield.

Find This Dumb Little Bitch And Throw Her Into a River joins the ranks of a recent trend of depicting monstrous acts committed by children and youth, such as Bartosz M. Kowalski´s Playground, based on actual incidents. Besides the topic of somewhat inherent evil and cruelty in children, Brand manages to effectively bring attention and to the more universal notion of individual responsibility, avoiding the technicalities of cyberbullying.

The intrinsic didacticism embedded in the drama thus sprawls beyond the borders of Generation Z.

Find This Dumb Little Bitch and Throw Her Into a River