Kitano Takeshi stars in and directs a gangster drama that delivers exactly what audiences are expecting to find. 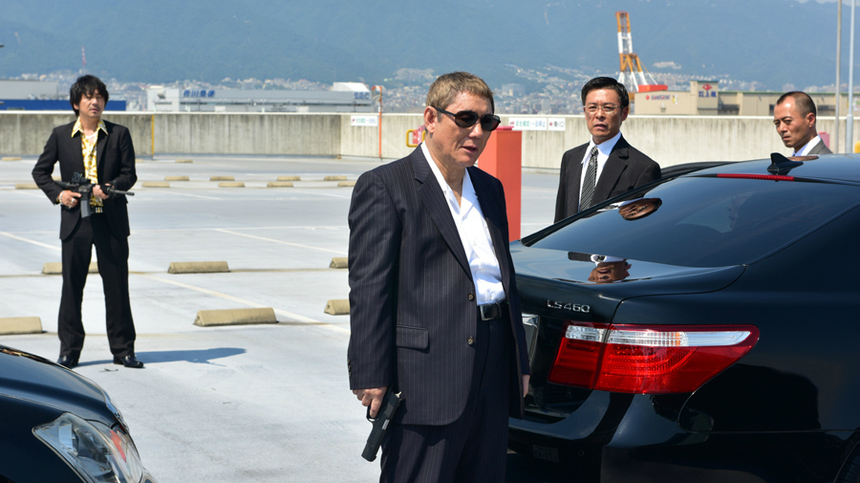 It's been seven years already since Kitano Takeshi decided that he still had some things left to say about the Yakuza and their world.

After taking a break from the genres and themes that turned him into an admired cult director across the globe, Kitano returned to the shady underworld of the Japanese mob with Outrage in 2010 (you can travel back in time to our review roundup here).

Of course, being the critical success that it was, people were left wanting for more. And so thankfully Kitano came back with the second chapter of the series, Beyond Outrage, back in 2014. Even though this time it wasn't as universally well received as the first one (though our own Ryland Aldrich was more than happy with it), it was quite clear at the time that we needed one more chapter before closing the book. Luckily for us, Kitano Takeshi seemed to agree and he's back again with Outrage Coda, the latest and probably final chapter of the saga.

At the beginning of the film we're introduced once more to Otomo, the taciturn old-school Yakuza played by Beat Takeshi (Kitano's onscreen alter ego). This time we find him on Jeju Island, South Korea, where he's now keeping a low profile while running some underworld ventures for Mr. Chang (played by Kaneda Tokio), a powerful Korean mob boss who's controlling things from Tokyo.

But this apparent state of relative calm starts to crumble when Hanada, a Yakuza lieutenant with some kinky fetish tastes and member of the powerful Hanabishi clan, roughs up a couple of Otomo's prostitutes and demands to see their boss for a refund. Without any knowledge of who Otomo really is, the incident ends up with one of Otomo's underlings dead.

This seemingly minor incident turns out to be the only spark needed to put things in motion, as Hanabishi's underboss Nishino (played by Toshiyuki Nishida) and his deputy Nakata (Sansei Shiomi) will try to exploit the situation to seize power from Nomura (Ohsugi Ren), current boss of the Hanabishi family. What they didn't account for though, was Otomo's return to Japan on a mission of his own.

Does the plot sound a little confusing? Well, it can be a little daunting in the beginning, as you are assaulted with a long list of names as you try to figure out who's who and where do their allegiances lie and the place they take in the chain of command. But Kitano's back to basics approach helps viewers to quickly settle up.

This is mostly a movie about angry old man yelling at each other at meeting rooms (ok, with some sudden outbursts of violence in between), and Kitano chooses to showcase these scenes with a classic approach: he just puts the camera in the room and lets his characters do the job. Kitano has always been a man who loves to leave the camera in one place and let it roll, relying on his wonderful editing skills to add the magic touch, and that's exactly what he does again this time, even though some of his trademark editing tricks aren't used this time or kept to minimum.

Thanks to this, audiences are thrown into the backrooms of the Yakuza world, turned into witnesses of the inner workings of the power struggles that happen not in shootouts on the streets but in meeting rooms. It's not difficult to imagine that probably you could find something quite similar going on at any big company offices (minus the killing and pinky cutting parts, I hope).

And of course, this being a Kitano Takeshi film, there's also the violence. Because after the meetings and the scheming comes the shooting and backstabbing. Outbursts of violence are sprinkled throughout the movie, but they're never the focus of the film, only the logical consequences of the characters' actions.

Kitano is a master at shooting violent scenes, achieving the perfect balance between the stylized coolness of the visuals and the required dramatic impact. In that sense, one of the highlights of the film involves a slow motion shooting sequence, one of the few licenses that Kitano allows himself in the film towards a more dynamic camera work.

With Outrage Coda, Kitano delivers exactly what audiences were expecting to find. And maybe that's the only criticism that could be made to the film. You will find no surprises here, but if you made it here after Outrage and Beyond Outrage, you probably wouldn't want it any other way.

Do you feel this content is inappropriate or infringes upon your rights? Click here to report it, or see our DMCA policy.
HakuryûJapanKen MitsuishiKitano TakeshiNadaka TatsuoNishida Toshiyuki