Review: BEYOND OUTRAGE Brings Back The Violence 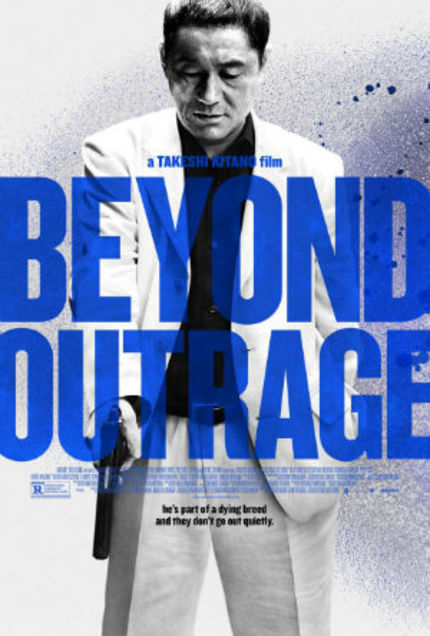 Any fan of Japanese cinema from the last few decades knows: If there is a gun in your face, the last person you want to see on the other end is Kitano Takeshi (or rather his actor-ly persona Beat Takeshi).

That no nonsense, guns-blazing side of Kitano took a hiatus for a few years while he pursued a more sensitive artistic side, but returned two years ago with his Yakuza comeback tour de force Outrage (you can find our review roundup here). One dose of Kitano ultra-violence wasn't nearly enough, and the man has heard our pleas, returning with the second part of the saga, Beyond Outrage. While it has all the trappings of the middle chapter of what's bound to be a trilogy, the film is a worthy follow-up to Outrage and delivers more of the excellent Japanese action we've come to expect from Kitano.

Warning: Outrage spoilers follow (but none from Beyond Outrage).

Things pick up a half a decade on from where we left off in Outrage, with Kato (Miura Tomokazu) now sitting atop the Sanno family after his betrayal of the former chairman. Otomo (Beat Takeshi) is safe in prison (Kato thinking him dead), while former Otomo soldier Ishihara (the dandy one with the funny glasses - Kase Ryo) sits as Kato's second in command. There is dissension in the Sanno ranks, as many of the old guard feel that Ishihara and other men have been promoted by Kato out of turn. They're also sore that Ishihara seems to be leading Kato by the nose into a more legitimate world of hedge funds and government cooperation that they aren't as familiar with.

A spark comes to the tinder in the form of organized crime inspector Kataoka (Kohinata Fumiyo), who is fed up with the lack of cooperation from the Kato/Ishihara regime and schemes to chop off its head using any means necessary. This includes courting conflict with the Kansai-based Hanibishi family, tracking down disgraced Otomo gunman Kimura (the one who took Otomo's blade to the face - Nakano Hideo), and even arranging an early release from prison for Otomo, one man who is sure to have a beef with Ishihara and Kato.

True to the first film, much of the drama is spelled out in the first half of the film in secret meetings and shot / reverse-shot discussion. This evokes the great Japanese cinema of the 50s and 60s, but can prove a bit tedious for those not accustomed to the style or easily lost in the flow of Japanese surnames. But when the violence does kick off, it's all Kitano. Growling crime bosses, dispensable digits, and a particularly inventive use for the toys at batting cages all make appearances.

While there is no official confirmation yet, Kitano loves trilogies, and all signs seem to point to this being the middle chapter of Outrage. Therefore, it stands to reason that there is some inherent dissatisfaction in Beyond Outrage, as is found in most middle chapters. But this is only slightly present at the film's conclusion, and even with this film's somewhat less complex plot, Beyond Outrage is every bit a worthy successor to the title.

Review originally published in slightly different form during the Toronto International Film Festival in September 2012, under the original title, Outrage Beyond. The film opens in limited theatrical release in the U.S. on Friday, January 3, 2014, via Magnet Releasing. It is now available to watch via various Video On Demand platforms. Visit the official U.S. site (Magnet Releasing) for more information.

Do you feel this content is inappropriate or infringes upon your rights? Click here to report it, or see our DMCA policy.
Beat TakeshiJapanese CinemaOutrage BeyondTakeshi Kitano

More about Outrage Beyond