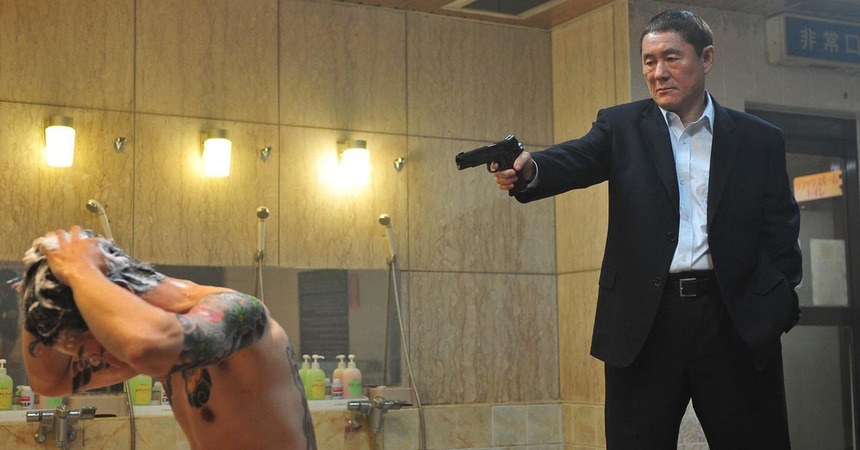 Japanese director Takeshi Kitano returns to his Yakuza roots with his latest film Outrage. Premiering at Cannes back in 2010, the film has played festivals around the world in the year and a half since and the ScreenAnarchy team has logged six, count 'em, six reviews of the film thus far. With the movie finally rolling out into theaters today, here's a look at a few highlights from our reviews:

Todd Brown was the first to review the film at Cannes and was such a fan that his quotes have appeared in the film's marketing materials since then.

When it comes to the gangster film few have ever done it better than Kitano and with Outrage he is absolutely back in peak form...

Despite the plot complexity, Kitano directs one of his most direct and most violent pictures here. His work behind the camera is crisp and precise, his work in front of it demonstrating again that Kitano is generally at his best as a blank cipher, one that you can read almost anything in to and one capable of sudden bursts in any direction without warning.

Though not Kitano's strongest film - I personally give that title to Sonatine - it is clearly his best since Zatoichi and one which stands comfortably beside both Sonatine and Fireworks to create a trio of truly iconic international crime films.

Mack's review also recognizes the film as a return to form for Kitano but notes "he has made subtle changes to the direction and execution of Outrage that make it stand distinct from the rest," going on to add, "Kitano has written a screenplay with a whole lot more dialogue in it than any of his previous Yakuza films." The film is a hit for Mack as he concludes, "The Chairman of Yakuza films has returned and he has taken his rightful seat as the head of this film clan!"

Another fan of the film, Guillem Rosset's review spends some time focusing on the excellent performances on display.

Kitano has assembled a wonderful cast of actors. Seasoned yakuza films fans will notice some familiar faces here, but there's also some new young faces. Performances are strong throughout the film, with only minor problems with some non-Japanese actors (as usual in Japanese films, sadly). Beat Takeshi once again brings his characteristic inscrutable face and body, leaving the interpretation of his acts and words to the audience.

With a starkly contrasting viewpoint, Greg Christie's review comes in far less complimentary, calling the film "outrageously dull" and claiming the assumption that, "the majority of positive reviews are largely based on nostalgia." Greg does note, however, that as a big fan of Kitano's earlier films, his expectations were admittedly pretty high.

Outrage plays out like a parody of classic yakuza & samurai films and a satire of Japanese formality. -- The problem is that the film's tone is far too serious to play for laughs, and yet it's simply too cliché to make for compelling viewing as a drama or thriller.

The majority of the film is nothing more than old men in Outrageous suits sitting in bare rooms, bulging their eyes, and yelling at each other with someone getting violently whacked every twenty minutes or so. It's all silly macho Japanese male posturing without any real momentum. "The Men Who Roll Their Tongues" would be a suitably more appropriate title for the film.

While deliberately glacier pacing is a common characteristic of Japanese cinema and is to be expected, Outrage largely feels stagnant. And beyond all of that, this is a sloppily directed film with a shocking bit of unintended (or is it?) racism.

Greg ends his piece on the final criticism, "Fireworks this is not." Read Greg's full review.

Charles Webb's review trends towards the mixed recommendation, pointing out that the, "relentless grimness of the picture makes it something less than an easy film experience," and noting, "there's not even really much in the way of a story here, simply a series of episodes where the families steadily and mercilessly chew away at each other until there's little left but bone." Still, this seems to work for Charles as he notes, "that's really the purpose of the movie, isn't it: to peel back the layers of myth and show them for what they are," and closing by adding, "Even if it's lesser Kitano, it's still a notable, watchable film for the raw disgust it's willing to put onscreen."

Josh Hurtado's strongly positive review finishes up our review round-up. Josh is impressed in the ways that, "Outrage is spectacular by its lack of spectacle," noting, "The violence is operatic, beautifully shot, and at times hard to watch." He goes on to say:

The two hour game of tit for tat is truly engaging and vigorously entertaining. You know that there is always another explosion around the corner, and the game is trying to get a head of it, but you never do. Even as the film closes out, and scores seem settled, they never really are.

Josh's final words sum it all up:

Kitano's direction is, as expected, impeccable, and the film looks wonderful. It may not be a sweeping, epic film, but it is something special, and I'm glad Kitano's finally come home.