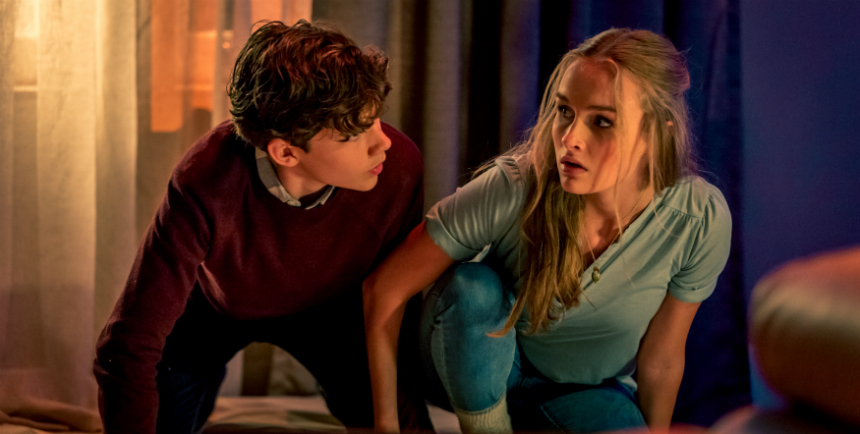 Let's not beat around the bush. Home Alone was pretty obviously the inspiration for Chris Peckover's sophomore feature Better Watch Out (originally titled Safe Neighborhood). There's nothing wrong with that. We all know that both John Hughes and Chris Columbus are filmmakers well worth emulating. But let's just say, there is a lot more than mere emulation going on in Peckover's ode. Instead we get a very dark and twisted thriller-comedy that is also a hell of a lot of fun.

While Kevin McCallister was obviously all by himself in that film, Luke (Levi Miller), the protagonist here, has a bit more company. This is in the form of his babysitter Ashley, played by Olivia DeJonge (who you may remember from Shyamalan's The Visit). Despite the teenage chasm worth of age difference between the two, Luke has a massive crush on Ashley and is determined to act upon it that night. That is, until strange things start happening around the house, suggesting there might be intruders about. When a brick crashes through the window reading "You Leave, You Die," it's pretty clear those suspicions are confirmed. But what might be the most compromising position of these young kids' lives, might also be just the opportunity Luke has been waiting for to be Ashley's knight in shining armor.

To say that the rest of the film plays out as you might expect would be a huge disservice to the filmmakers. This is a movie that does an excellent job of twisting and turning at just the right moments to keep the audience guessing and engaged. Yes, there are plenty of obligatory jump scares, but there are just as many plot shocks as well. It's pretty easy to guess why a film like this would be green lit from the concept alone and it's super refreshing to see a film deliver on its premise so well.

Also like Home Alone, the film is set at Christmas time. From a marketing perspective this seems like big flashing "buy me" sign. Even though the title Better Watch Out doesn't have the most holiday-centered ring to it, this could pretty clearly be a cult-genre Christmas hit a la Rare Exports. Who doesn't want to see a good thriller-comedy when everyone else is watching It's a Wonderful Life?

All in all, Better Watch Out is an extremely satisfying experience. It's dark, clever, and funny in all the right ways. With a winning concept and expert execution, Better Watch Out is sure to be a joy to unwrap under your tree this December. Or, you know, watch on iTunes.

Review originally published in slightly different form during Fantastic Fest 2016, when the film was titled Safe Neighborhood. It will open in limited release in select theaters in the U.S. via Well Go USA on October 6, 2017.

Do you feel this content is inappropriate or infringes upon your rights? Click here to report it, or see our DMCA policy.
AustraliaChris PeckoverLevi MillerOlivia DeJongePatrick WarburtonUSVirginia Madsen

More about Better Watch Out