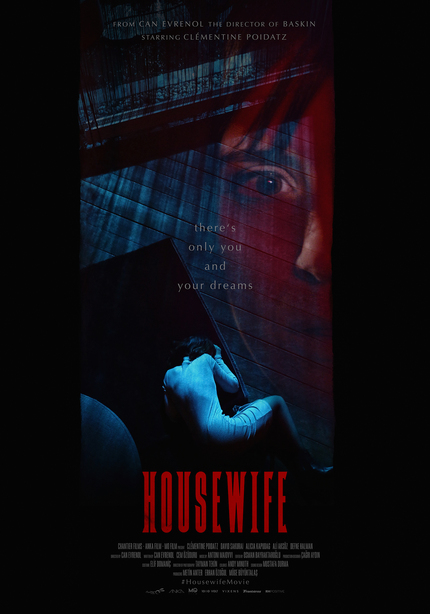 Let no one say that young Turkish director Can Evrenol doesn't have an eye for film. Throughout his sophomore feature, the English-language horror film Housewife, Evrenol presents the viewer with enticing visuals, almost enough of them to distract from what is otherwise a fairly disappointing follow-up to his 2015 debut, Baskin.

Housewife finds the titular woman, an emotionally scarred and frail beauty named Holly, as she and her infinitely supportive husband navigate some pretty weird goings-on. The film opens on a flashback to what appears to be the murder of her older sister by their mother going through her umpteenth mental breakdown, and this image haunts Holly's dreams to the present day. When she is reintroduced to an old friend who has become involved in a supernatural dream cult and the craziness gets going at full tilt.

In his new film, Evrenol relies heavily on nightmare imagery and chaotic sensory experiences to disorient his audience, a tact that served him very well in Baskin. However, this time around a number of issues hamstring the film when he attempts to give his madness a coherent narrative that opens more doors than it closes by a wide margin.

There is a kind of awkward pan-European feel to this film that harkens back to the art-horror films of the '70s that is reinforced by the sometimes off-putting English language dialogue delivery. Most of the cast, save for the dream cult guru played by David Sakurai, are not native English language speakers, but they manage well. As a result of the cast of polyglots, the delivery of the lines often has a somewhat stilted cadence that took me more than a few minutes to get the hang of. As the film progresses either the delivery got better or I became accustomed to it, but in any case, it was distracting enough that I wondered what the film would've been like if it'd been another all Turkish production, probably not what the creators intended my mind to be doing during their nightmare concert.

Housewife draws strong influences from late '60s and early '70s horror imagery, particularly that of the Bavas of Baron Blood and Argentos of Inferno or Suspiria, which is not a bad reference point to start from. The problem for me was that a lot of it was excecuted more like a '90s late night cable thriller I might've seen on Skinemax in my youth than the more baroque gothic terrors of Bava's heyday.

Several sequences in the film revel in the over the top violence and sexuality of the characters, with leering cameras inserting themselves between tentative lovers putting on a show. If the idea is to conflate the sex and violence in the characters' real lives with their dream worlds, I suppose its effective enough, but at times it feels forced in order to pad the already slight eighty-two minute runtime.

What Housewife does well, however, it does very well. The creature and gore effects on screen are very good, and even though many are silly and almost completely unexplained, they do their job and I am of the age that I'm always happy to see practical effects on a new horror feature.

Housewife's story is effectively the latest in a thread of Lovecraftian horrors that goes back for decades, but really hit its gooey peak in the last thirty years or so with films like Re-Animator, From Beyond, and The Resurrected - all explicit Lovecraft adaptations - and more recent Lovecraft-inspired films like The Void and even Guillermo Del Toro's Hellboy films. In this case the Old Gods are replaced by dream monsters known only as visitors and visualized in pretty much exactly the way you'd expect Lovecraft monsters to look. However, the film tries to explain its mythology a bit too much for my taste, weaving convoluted back stories that distract from the horror elements, which are pretty insane for much of the film.

Can Evrenol is a talented filmmaker, there's no doubt there, and Baskin was one hell of a debut featre, but I can't help thinking maybe Housewife was a step in the wrong direction. There is somehow too much story and not enough movie all at the same time. Unreliable narrators are a fun and often engaging tool in thrillers, but they really only work if the narrative sews itself back together neatly enough to see behind the curtain at the end, and that just didn't happen here. I can't wait to see what Evrenol does next, but I think I'll moderate my expectations a bit.