New York 2017 Review: WONDERSTRUCK, Why We Go to the Movies 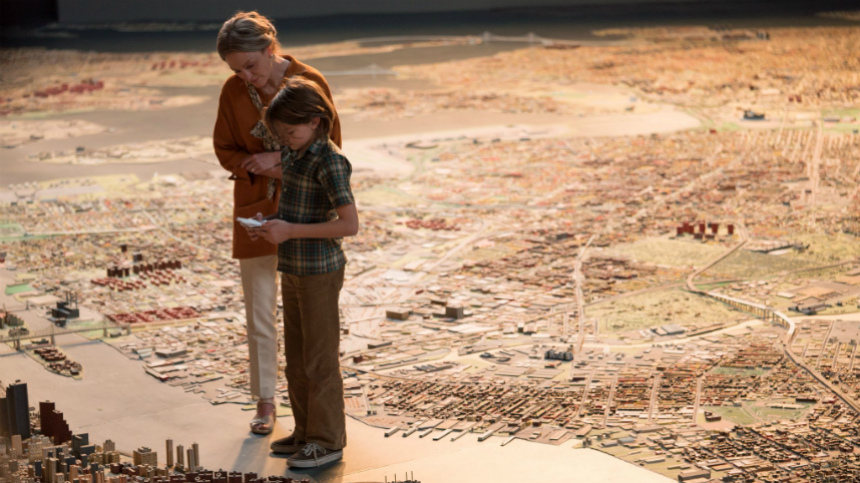 “We are all in the gutter, but some of us are looking at the stars.” -Oscar Wilde

If we were to conduct a poll of all of our writers’ and readers’ favorite live-action kids movies – and I really think we should – I believe that the fundamental traits uniting these classics would involve precocious children as protagonists, boldly answering a scary calling and setting out on the great adventure, odysseys that evoke wonder in the viewer’s brain, alerting them to the existence of alternate realities in their hero’s quest to discover their place in the world via independence, and journeys that never cease to offer genuinely frightening challenges for the characters and viewers alike.

The perfect kids’ film is one that, not only refuses to talk down to its audience, but trusts that they will rise to the occasion of material a little more dangerous and intellectually-beckoning than typically granted to their comfort zone. Todd Haynes’ new film Wonderstruck, based on the ingenious book by Brian Selznick (Hugo), offers all this and far more.

Wonderstruck seamlessly weaves together two separate stories in two separate eras. One is told in the stark black and white of the dying silent films of its day (1927), whereas the other is brought to life with the urine-yellow tint of New York in the late 70s (1977). Both stories contain deaf children who, despite being audibly-impaired, run away from their bleak small towns to NYC where they’re left to their own devices in the overwhelmingly big apple.

Their stories have more in common than we're first led to believe, but for most of the film, they’re married by parallel sensations of discovery and the fear of being far too young and disadvantaged to be navigating their grown-up quests alone. They’re small, silent souls in a big loud world and this feeling uniting them is the same one that drives every young soul who's ever ventured to the big city in search of a higher purpose.

During the New York Film Festival press conference, in discussing a shared favorite film of author/screenwriter Brian Selznick and Todd Haynes - the uber-influential The Wizard Of Oz - Selznick said, “The moment, which I think is maybe the greatest moment in cinema history, is when Dorothy opens the door from her black and white world in Kansas into Oz… Maybe that’s what this entire movie is…”

While Wonderstruck is so very much more than this one incredible landmark metaphor, you understand what Selznick means when Ben, the boy from 1977, played by the very talented Oakes Fegley, opens the door in Port Authority Station to the blinding daylight of sketchy, un-Disneyfied Times Square. Along with the journey of Rose, played by a captivatingly wordless Millicent Simmonds, we cross through into the illumination of the other side of the rainbow, only to discover that the journey itself is everything.

As the opening quote by Oscar Wilde suggests, the film is a love letter to an almost childlike ambition; it is dedicated to those looking up at the stars from the gutters of reality. If one insisted on drawing parallels between Wonderstruck and the rest of the films in Todd Haynes’ filmography, many could be raised, from the Wilde quote that prefaces the film, to the soundtrack's unique use of Bowie to convey longing for earthly space travel.

My mind goes straight to Dylan #1 of Haynes' 2007 masterpiece, I'm Not There, imagined as an 11-year-old African-American boxcar runaway named Woody, who rambles away from Duluth, Minnesota (like Ben from Wonderstruck) bound for New York town and eventual glory - but not before he can say he’s been “hittin' some hard travelin' too”. But Wonderstruck is not about that one holy boy who hopped on a Greyhound in 1959 to discover and reinvent himself, it’s about every boy and girl who sets off on his/her own hero's journey towards an unknown destiny under the seduction of bigger worlds outside of black and white comfort zones.

Wonderstruck is both an awe-inspiring ode to the limitless potential of the imagination to drive our lives and a love letter to those invaluable things that stir within us feelings of, well, wonder; the sensation of awakening to boldly striking new worlds. It is a feeling evoked by countless energies and things, but some classic favorites explored in the film include museums offering windows into the alternate realities of the past via curated history relics, foreign sounds coming from the radio reinventing the listener’s young notion of ‘a song’, the big screen flickers, particularly as experienced for the first time, which in the film happens for Rose in an era when the medium was almost as young as she was, and lastly, New York City - the prototypical metropolis - as something of a magnificent Emerald City of Oz.

In his originally fluid presentation of these invaluable items of wonder, Haynes is like the great curator who shares his soul through collected relics that accumulate into a picture so full its beauty bursts from the seems. Ever the exhilaratingly imaginative storyteller, Haynes tells his silent tale of silent cinema and beyond with refreshing cinematic ingenuity that not only suggests that his own childish sense of wonder is alive and well, but continues to offer inspiring evidence that there is plenty more area to be discovered in the cinematic language.

In a world - this world - where growing up is so often characterized by losing one’s childlike sense of wonder, I hope Haynes and all his kindred stargazers never lose sight of the sky. As a film lover, I’m counting on it.

Wonderstruck is so inventive and sincere in its presentation of creativity, I firmly believe it will live on as a relic with the power to enamour future generations of children and adults alike to the finer things in life for decades to come, especially considering its profoundly timeless qualities. An all-ages experience is an extremely rare thing if you think about it, but as I said earlier, if you present an audience, no matter how old, with that spark of awe; if you trust younger minds with more challenging ideas in their allegories, they will rise to the occasion. They must be at least given the opportunity. The stakes of kids’ entertainment are higher than you think. Teach your children well. Show them Wonderstruck.

Do you feel this content is inappropriate or infringes upon your rights? Click here to report it, or see our DMCA policy.
Julianne MooreNew York Film FestivalNYFF 2017Todd HaynesWonderstruck