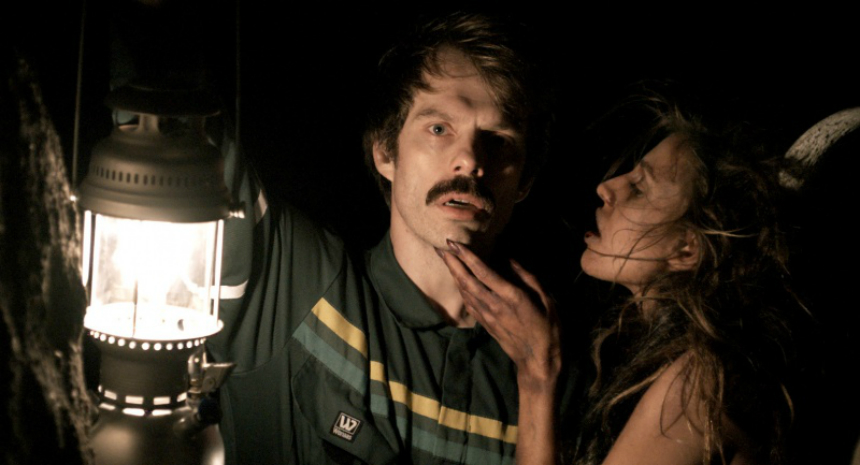 Blood-sucking vampires have been invading cinema screens for nearly a century now so it’s increasingly rare to see something truly original come out of the genre. Enter Vidar.

Not only is this unfortunate creature one of the sorriest excuses for a vampire to ever grace our screens, he’s also the regrettable recipient of what has to be the most shockingly sacrilegious siring ever seen. In Vidar the Vampire, directors Thomas Aske-Berg and Fredrik Waldeland mix scenes of jet black comedy and horror with layers of pathos to put their own unique spin on the undead formula.

Utilising a similar narrative structure to Interview with a Vampire we’re introduced to the life, death and rebirth of Vidar as he recounts his tale to a human witness, only instead of a fascinated journalist listening to his tale of woe, we have a disbelieving psychologist. Vidar’s story begins on a farm where a lonely young boy is forced to fend for himself, getting up early to make breakfast, tend to the livestock, and cater to his mother’s demands.

The only break in this monotonous routine is when the neighborhood girls turn up to play tricks on the love-starved youth. At 33-years-old, nothing’s changed. Vidar’s lived a good Christian life but still sleeps in the same tiny bed, flicking through the same old issues of Playboy each evening. This all changes one night when a hallucinogenic dream leads Vidar into a barn where an encounter with a vampire claiming to be Jesus Christ sees the young man’s life irreversibly changed. It’s not blood Vidar has to suck to become a vampire… but suck it he does and so the farm boy sets out from his village to follow his new master into a world of unholy brothels and soulless nightclubs in an attempt to find love and meaning.

At its heart Vidar the Vampire is a tale about finding, and accepting, your place in life, with Vidar’s vampirism acting as a metaphor for his depression and alienation. Interspersed amongst the touching scenes of loneliness and soul searching is some refreshingly goofy humour and gross-out horror.

Vidar, as portrayed by writer-director Thomas Aske Berg, is a gentle soul at heart who continues to wear his farm overalls even after his move to the city, and whose biggest concern when waking up within a bloody pentagram is which farm the dead sheep next to him belong to. Scene-stealing Brigt Skrettingland is a different story as the sleazy vampire Jesus, who runs a good line in nonsensical Messiah-speak and pick-up artist magic tricks, like turning a glass of water into wine with a swish of a handerkerchief.

Low budget it may be, but this Norwegian black comedy still manages to look good as it gently pokes fun at the vampire genre as when Vidar scales walls and rises from his coffin Nosferatu-style. Comedy and horror are often intertwined as in one instance when a stealthy vampiric night stalking aided by swelling music cues ends abruptly with a door slammed in the face. While the sometimes shockingly perverse situational comedy doesn’t always sit well with the deeper themes the film explores, the steady flow of gasp inducing moments make it a consistently entertaining watch.

Vidar the Vampire’s heart is more melancholic blue than black but that doesn’t stop him from getting into a variety of astonishingly offensive scrapes in this highly original first feature.

Do you feel this content is inappropriate or infringes upon your rights? Click here to report it, or see our DMCA policy.
Brigt SkrettinglandFantastic Fest 2017Fredrik WaldelandNorwayThomas Aske BergHenrik RafaelsenKim SønderholmEspen HanaComedyHorror

More about Vidar the Vampire