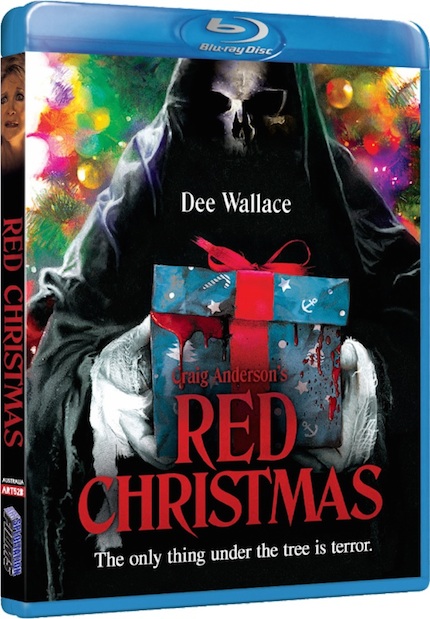 I first saw Red Christmas at Fantasia in 2016, and then again in September 2017 at the Horrible Imaginings Film Festival. Star Dee Wallace (Cujo, E.T.) was in attendance at both festivals, but it was at HIFF where she gave an impassioned speech about her choices and her role in Red Christmas that cemented her status as a serious badass for me.

After a lengthy festival tour, director Craig Anderson's crazy little horror film has come out on blu-ray via Artsploitation. Crafted on a microbudget, this home invasion slasher filmed in Australia took full advantage of the funding and talent there as well as the natural lighting on hand.

Wallace stars as a retiring mother who's gathered her children around her in the family home for one last Christmas before she sells the house and travels the world. They don't particularly like this news, and there are a few subplots with the adult children that involve in-fighting.

However, all that stops when a tall, black cloaked weirdo shows up on Christmas Day. It's not long before all hell breaks loose and the family is besieged by this strange maniac who claims to be part of the family --- and refuses to go away. The film killed at bothe Fantasia and HIFF, and I wouldn't be surprised if it became a modern cult classic.

Red Christmas is a hard film to write about without spoiling it, but it's a trip. Taking on themes of both pro-life and pro-choice, the film takes a long, unwavering look at abortion, Down Syndrome, and family. It's a film that, sorry for the cliche, holds up a mirror to society and makes you question your own belief system without judging either side.

That said, Wallace goes full-on Cujo here, protecting (or attempting to) her family during the worst Christmas ever. Red Christmas offers a lot of fun, weirdness, great FX, and terrific acting --- particularly from grand dame Wallace. The blu-ray looks and sounds great, and if you're looking for something to scratch your bizarre film itch, Red Christmas fits the bill nicely.

Interested? The film is now available on blu-ray, DVD, and VOD now. Check out the trailer below and find out more about Red Christmas on the Artsploitation page here.

Do you feel this content is inappropriate or infringes upon your rights? Click here to report it, or see our DMCA policy.
ArtsploitationCraig AndersonDee WallaceRed Christmas