Venice 2017 Review: LEAN ON PETE, The Greatest Tragedy Of The Biennale So Far 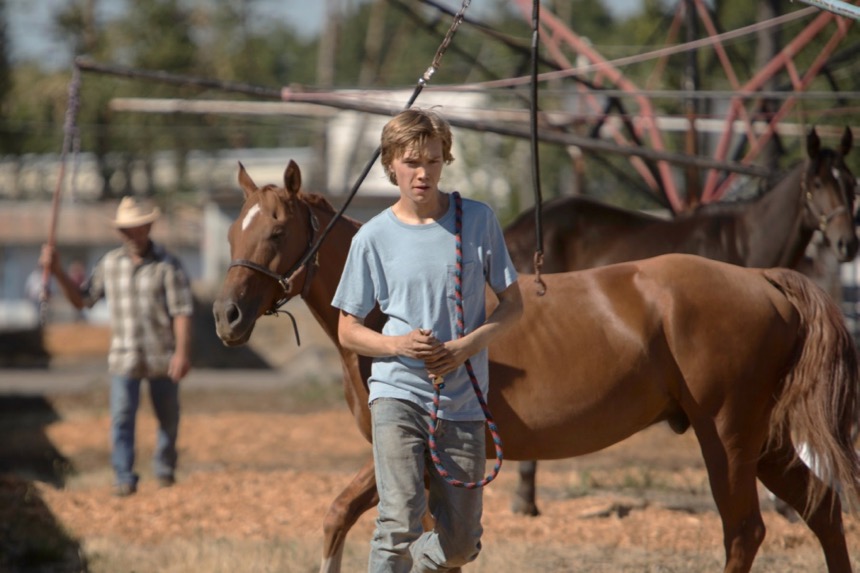 If you’re a big fan of dramas like myself, then a review with the words “Andrew Haigh” plus “greatest tragedy” might well make you think that you’re onto a winner. Unfortunately, Lean on Pete isn’t the Andrew Haigh entry into the 74th Venice Biennale’s Official Competition that either you or I was expecting. It brings me great pain to admit that too, as I will happily declare that, for my money, Andrew Haigh is one of the golden boys of contemporary British cinema.

What’s more, if you’re wondering whether Lean on Pete is an intriguing continuation of his first feature - the wonderfully explorative gay docu-drama Greek Pete - then I’m afraid it isn’t. Alas there is no return for that endearingly, big-eared male escort Pete in this film, and Haigh’s choice to make another film with the word “Pete” in it seems to have been entirely coincidental. In fact, if you haven’t seen Haigh’s first film yet, but are contemplating watching Lean on Pete, please buy the former on DVD and watch that instead.

It’s a real pity that I find myself saying that, however - because by the time Haigh was making 45 Years, it was as though he could do no wrong. The directorial leaps he was making between Greek Pete, Weekend and 45 Years seemed completely exponential each time, and no matter what class, sexuality or age he was depicting, it was as though Haigh was growing from strength to strength in his ability to unpack characters’ innermost struggles and convey them in the most faultless dialogue. They were in short, films that you fell in love with as their characters struggled desperately to feel completely loved.

To some extent, Lean on Pete totally follows in that tradition. Despite the fact that the title actually refers to the name of a race horse who features prominently, the main character is definitely a very Haighean young boy named Charley, played by Charlie Plummer. Having never known his mother, and having spent most of his life with an affectionate but sometimes errant and often broke father, Charley seems to be in perfect Haigh territory as he searches for love and stability.

Something in this feature seems to have gone awry, though. Like so many directors of late, Haigh has made the step into an American context, and he seems to have lost his way in the process. In fact, if I am honest, I do think it’s a pity that Haigh made the decision to step away from his previous British source material at all, because he had been in the process of telling such important, neglected narratives on his country’s behalf. That said, there is absolutely no reason why he should not be allowed to cast his brilliant gaze at another culture, and there’s definitely no reason why exploring blue collar American culture should result in anything lesser than what he was doing before.

It’s more that it seems as though Haigh had a truly great skill for making dialogue seem completely effortless and deeply profound, and then like some kind of infant terrible, he has grown tired of his own talent and turned his back on it completely. The result is a film like Lean on Pete, where, between a string of what looks like the most unhealthy food imaginable, Charley does little more than go for runs and mutter at the somewhat dysfunctional people he meets in his day-to-day life.

This eventually drives him into the irascible company of wheeler dealer Del (Steve Buscemi), a cantankerous old horse rearer who rarely plays by the rules and has a habit of running his horses into the ground to make a few bucks at races - and his sidekick Bonnie, a characterful female jockey who comes closest to a fully rounded female character in this script. None of these three actors really do anything wrong either, and Buscemi is especially characteristically brilliant as always in his role as the grumpy potential new role model.

But as young Charley begins to learn the ropes of horse racing, you sit there patiently and wait for it all to get deep. And in truth it soon does. Charley’s life unexpectedly takes a turn for the worse, and he begins to quite literally emotionally lean on Pete. He even eventually makes a break for it with Pete to save him from a Mexican slaughter house, and by this point we seem to be back on traditional Haigh territory. Charley slowly opens up to the horse about the dissatisfactions in his life, and shares the discrepancies between who he is and who he would like to be with him.

These heart to hearts with the horse are where Lean on Pete seems closest to Haigh’s lofty heights of dialogue. But even that as a sentence seems nonsensical. It is true that the bond between boy and horse is a tried and tested emotive formula, but in this film it gradually becomes ever more ridiculous as the two fugitives experience scene after scene where they get away by the skin of their teeth simply somebody says, “Now, you just wait here.”

Clearly Haigh has really attempted to do something new with Lean on Pete. Both in terms of geography (after all, the expansive shots of vast American landscapes certainly are often very striking), and in terms of directing a story that is more visual and cinematic. Maybe he really did want to rely less on dialogue, and should be entitled to do so. The pity is that I am just not sure that it has come off here. It may well be something worth trying again for Haigh, but Lean on Pete was never going to match something as emotionally explorative as 45 Years.

It’s not that this film is a complete failure, and if you’re a Haigh fan, maybe you should test it for yourself. After all, Lean on Pete certainly is a very moving story about one boy’s unfortunate race to rock bottom; and as such, it includes both a compelling exploration of both homelessness and a study of our ability to transfer hopes and affections to a wide variety of things when desperately unhappy. But even if Haigh probably was really rather busy on a wide array exciting projects over the last few years, this is certainly a disappointing misfire from both him and Film4.

All of this said, though, I will remain the huge supporter of Haigh, and whilst Lean on Pete may or may not get the critical acclaim at this festival that fans were hoping for, I look forward to seeing what the next dramatic masterstroke he comes up with. I just personally hope it doesn’t shy away from using Haigh’s incredible skills for great dialogue next time.

Do you feel this content is inappropriate or infringes upon your rights? Click here to report it, or see our DMCA policy.
andrew haighcharlie plummerlean on petesteve buscemi