Toronto 2017: There Will be Many Tears Over Spilled Milk After This Clip From LATCHED, Count on it 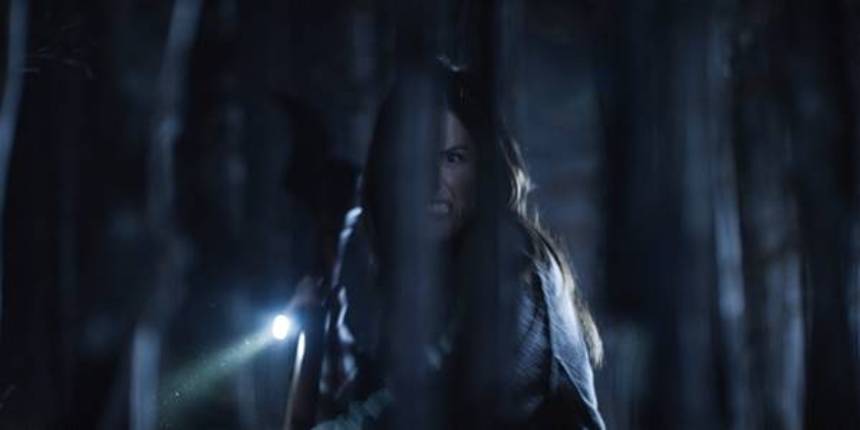 Here in Canada there is a campaign stating that it is okay to cry over spilled milk, countering the old adage, because Canadian dairy products are awesome and their loss should be mourned like the passing of a family member or favorite goldfish!

In contrast, by the looks of this clip from Justin Harding and Rob Brunner's newest short film Latched the only tears that are going to drop over spilled milk are going to be tears of fear and despair. At least it suggests it.

Newly-single mom Alana (Alana Elmer) and her 14-month-old son Bowen (Bowen Harding) are alone in the off-season on an island cottage, with only a strange old neighbour (Peter Higginson) for company.
A choreographer looking to get back into the dance world, Alana uses her time of solitude to practice her moves and prepare for a new adventure involving an experimental dance company. Then on a walk in the woods with Bowen, they discover the decomposing remains of what is dubiously identified as a bat. It is not a bat.
That’s the bare and chilling premise of Latched, directors Justin Harding and Rob Brunner’s latest horror short, which is debuting at the Toronto International Film Festival, opening the Shorts Program.
No stranger to the concept of terror-and-children, Harding and Brunner recently turned heads with Kookie, a short, terrifying film about a greedy little girl, a haunted cookie jar and a killer clown, which earned an Official Selection at SXSW and won over 30 awards.
What distinguishes Latched, however, is that it is a meta-project involving Harding’s real-life wife and child, a maternal dynamic the filmmaker knew would translate to the screen powerfully.
Elmer (who also starred in Kookie) actually is an acclaimed dancer with the Toronto Dance Theatre and emerging from maternity leave with her son Bowen. The rotting “fairy creature” that terrorizes her is fellow professional dancer Jarrett Siddall.
And, in a full-circle move that’s further representative of the film’s intimate creative approach, Harding convinced a major mentor of his youth – his film class and visual storytelling teacher Dale Andrews – to join as executive producer, bringing with him the passion that first inspired him 16 years earlier.
“It’s a new type of genre film,” says Harding, “inspired by a desire to produce something uniquely beautiful and shocking involving immediate family and cherished friends.”
“Latched was designed to dance between the frightening and the artistic,” Brunner adds. “This story could only be told with the honest dynamic of a mother and son whose real relationship lures the viewer deeper into an unexpected nightmare.”
Harding and Brunner are reality-TV veterans with an urge to go surreal. Brunner has directed The Amazing Race Canada, Wild Things with Dominic Monaghan and Top Chef Canada, while Harding has produced The Amazing Race Canada, Master Chef Canada and more.
“Everything we’ve done has been with a mind to getting back to our roots,” Brunner says. “We approach everything we do, including the big reality shows, with a film-making approach. It’s truly where our heart is. Justin and I have worked together for many years and share a creative eye.”
Harding and Brunner have gone on to create The Bokeh Collective, with a goal “to push the boundaries of epic storytelling.” The company is working show-running four different American documentary series. Having shepherded their work through the most prestigious showcases and festivals in film, they are ready to expand their creative journey to include feature-length production.
Indeed, Latched is a short film with a feature-length sensibility. Its score was created in collaboration with composer Vivien Villani, who conducted original music with a 19-piece orchestra.
“To call it a passion project would be an understatement,” Harding says.  “We are beyond excited to share our crazy little film with everyone at TIFF.”