Toronto 2017 Review: VALLEY OF SHADOWS Leads Us Into The Deep, Dark, Woods Of Scandinavian Gothic

Jonas Matzow Gulbrandsen's debut feature is a dewy, surreal tale of innocence on its wayward cusp. 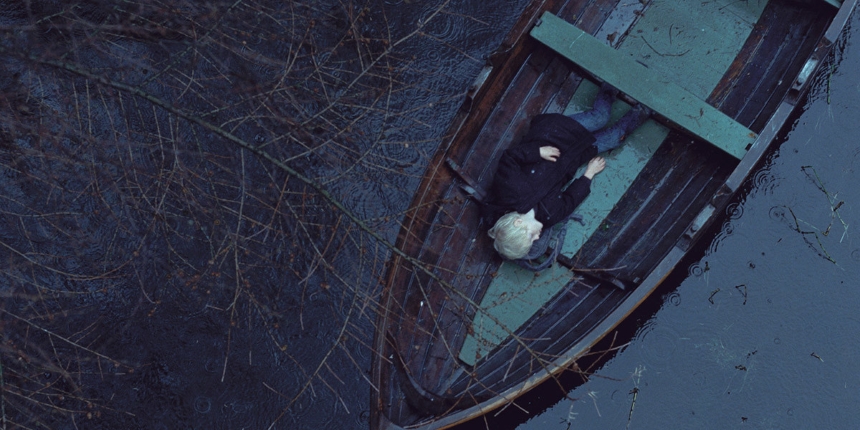 What we do not understand scares us. We often need monsters to blame.

Young Aslak is at that tender age where we all seek a little independence, but do not know what to do with it. When nothing in the adult world makes clear sense, and time seems to stretch out forever. This leaves ample opportunity for him to wander and explore his surroundings - out of sight of his harried single mother.

The current big going ons in Aslak's life is the mysterious killing of sheep in his rural Norwegian village. There is also the gaping absence of his older brother. Could they be related? These gory slaughters occur only when the moon is full. Could there be a werewolf perhaps lurking in the dank, fecund woods on the doorstep of the town? Wonder and danger are two sides of the same coin.

There is not much in the way of dialogue in Jonas Matzow Gulbrandsen's debut feature, Valley of Shadows, a dewy, surreal tale of innocence on its wayward cusp. The storytelling is firmly in the school of show-don't-tell, but when it does deign to speak, it inclines one to sit up and listen. An early, isolated line of dialogue: "Come, I have something to show you," is a self-contained diamond; effectively and efficiently the Ur-promise of cinema. With an eye for cinematography as allegory, Valley of Shadows is cinematic to its very core.

Shot by Marius Matzow Gulbrandsen (the director's brother) as if it were a waking dream, where ultra-wide shots to establish geography are intermingled with close-ups of young faces to offer interior landscapes. The film makes sure you are never on firm ground with either, but the tone is consistently daring and we are quietly invited to see what comes next. Individual shots often seem like self-contained movies, with the picture holding its breath.

The magic here exists in the pauses between shots. A baroque, Moog-ish, score from Zbigniew Preisner (a regular collaborator with Krzysztof Kieślowski) knows when to get out of the way, and when to make its presence unequivocally known. This is the space (or silence) where a moment of uncertainty might go either way: into anxious despair, or into profound acceptance.

Aslak flirts with going into the forest several times, arriving right up to the edge (which is fenced off but not without holes) with his friend. They desire to find and expose the werewolf who is killing the sheep, but the imposing wall of trees proves too much. Later, when his dog, Rapp, disappears and his distant mother is fully in the throes of other adult worries involving the police, Aslak gathers up some bread and jam, and heads into the forest on a rescue mission.

The camera lingers on the thick red jelly on the lily white bread, in the same way it rests on an early image of Aslak's pale fingers covered in lamb's blood upon discovery of the sheep carcasses. The imagery announces innocence lost. But not so fast. At first blush, I thought it might be a burgeoning puberty, but upon further consideration, it is more a severing of the umbilical cord, be it prepared for life or not.

Apparently the classic Gothic narrative has a Scandinavian tributary in the same way it has an American one. Homesteads and looming architecture are supplanted with moss covered-forests and rocky wilderness. Forbidden knowledge arrives here not as answers or revelations, but as an acknowledgement that the world (and family) is a place of unanswerable mysteries and secrets.

Growing up is pretty fucking strange. But you cannot go back. On several occasions the image of the full moon dissolves onto Alsak's blonde head of hair as he sleeps. The narrative often exists as a persistent dream-like state of the future promise of adulthood.

Valley of Shadows evokes key shots from Charles Laughton's Night of the Hunter and Michael Haneke's Time of the Wolf, while being in hock to neither. All three films are, paradoxically, familiar, and deeply unconventional coming-of-age stories. There is a distinct flair for visual precision. On second thought, maybe it is not wise to pay too much attention to the words, and focus on the images, which steer closer to universal truths than your run-of-the-mill scary movie is willing to go.

The Gulbrandsens take classic folk tales, steep their tropes in modern psychoanalysis, and put the results on display via expressionistic cinema. Gorgeously rendered on 35mm film, shot on location in the particularly foreboding western peninsula of Norway, it is hard to believe it is a first feature. We will be watching the brothers' careers very closely going forward, all the while leaning in, hard, to this frighteningly confident first feature.

Do you feel this content is inappropriate or infringes upon your rights? Click here to report it, or see our DMCA policy.
Adam EkeliCinematographyFairy TalegothicJonas Matzow GulbrandsenKathrine FagerlandNorwayScandinavia

More about Valley Of Shadows