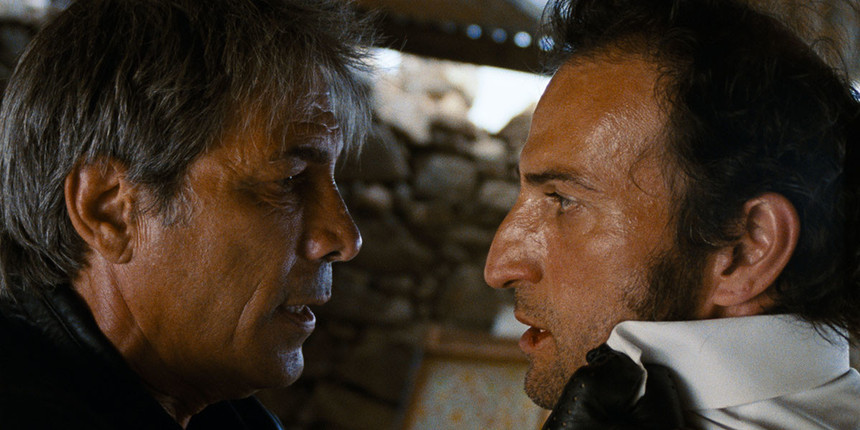 Belgian filmmaking duo Bruno Forzani and Helene Cattet won a legion of dedicated fans around the world with their dazzling neo-giallo debut Amer several years back and they remain some of the most striking talents in European cinema today. While they've shifted styles slightly from project to project their signature style is always immediately recognizable, layered as it is with gorgeous retro-chic visuals.

And the pair is back on the festival circuit now with their latest - a western titled Let The Corpses Tan (Laissez Bronzer Les Cadavres) - screening in Locarno and Toronto. Here's how Toronto describes it:

TIFF Vanguard veterans Hélène Cattet and Bruno Forzani weaponize their aesthetic proclivities into an all-out bombardment of sensational style as they methodically adapt every devilish detail from the cult novel by Jean-Patrick Manchette and Jean-Pierre Bastid. A gang of thieves absconding with 250kg of stolen gold arrives at the abode of a listless artist caught in a bohemian love triangle. The scenario quickly escalates into a desperate day-long firefight between cops and robbers throughout the remote ruins of a Mediterranean hamlet — and genre and art-house tropes collide in a relentless reverie of action spectacle, exquisitely photographed on Super 16mm film.

Pivoting from the giallo-inspired imagery that enveloped their previous films, Cattet and Forzani trade in their razor blade–laden gloves for the bullets and biker jackets that characterize the pulpy Italian poliziotteschi crime films of the '60s and '70s. Still persistent of course is the filmmakers' signature penchant for the haptic fetishization of the human body, here most sensorially depicted whenever the film allegorizes the dire straits of its characters via a silhouetted cast of "Fates" pantomiming all manner of delirious depravity to an Ennio Morricone tune.

Mixing in some sun-baked spaghetti western imagery for good measure, Let the Corpses Tan is a wicked distillation of action cinema's core cinematographic ingredients (from crash zooms to whip pans), now radically redeployed for maximum visceral impact and delivered like a celluloid shotgun blast to the synapses.

We were very pleased to present a first teaser for the film and that has now been followed by a stunning full trailer. Check it out below!