Fantastic Fest 2017 Review: MOM AND DAD, Infanticide Has Never Been So Much Fun! 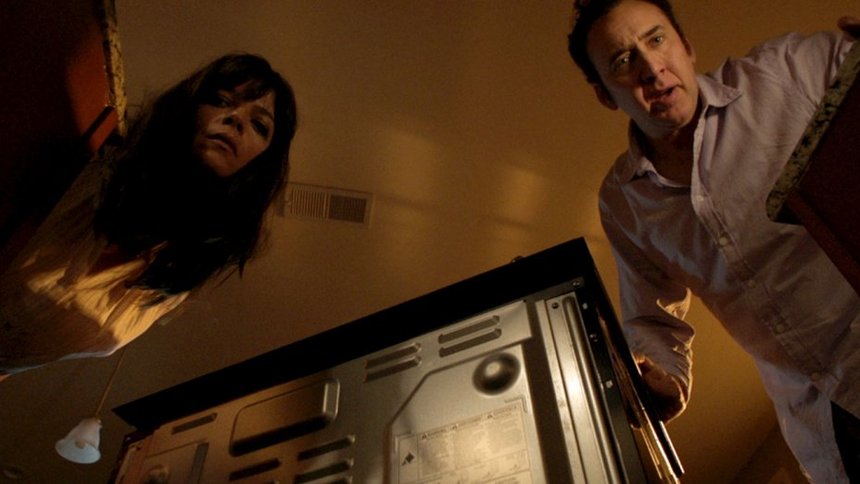 Becoming a father was the greatest thing that's ever happened to me. I'd wager that this sentiment rings true to millions of other parents around the world, as well. However, as glorious a feeling and as rewarding as parenthood is, it isn't always a bed of roses. For every proud moment I have as a Dad, there are frustrations too numerous to count. Whether it's my child's inability to make his bed, his constant forgetful nature that often has me running around to gather up stuff he needs for school, his complete blindness to the messes he steps over every day, or even the simple things like using our guest bathroom as a laundry hamper, the kid is often an infuriating work in progress. Yet there is an instinct born of millenia of evolution to protect these little beasts we love so much, to keep them from harm even at the cost of our own lives that is both implicitly understood and often completely baffling, but what if that instinct suddenly reversed itself?

This is the question that Brian Taylor's new film, Mom and Dad, seeks to answer in the most insanely violent and absurd way possible. Taylor, who is one half of the directorial team of Neveldine/Taylor (Crank, Crank 2, Gamer), makes his solo feature directing debut with Mom and Dad and brings a lot of his own manic style to this out-and-out action fest that pits parents against their own progeny in a world gone mad. Along for the ride is the always reliable Selma Blair as Mom and the always game Nicolas Cage as Dad, both bring their A-games, and help to make this crazy little film a lot of fun.

All across the world, parents have suddenly turned on their children, committing mass infanticide in some of the most gruesome ways possible. These parents are otherwise completely normal, apart from the fact that they feel the undeniable compulsion to off their own offspring. Carly and Zack Ryan are young siblings end up running for their lives from their murderous Mom and Dad throughout the second half of the film, attempting to MacGuyver their way out of becoming the next victims, but does ingenuity beat insanity?

The two lead performances by Blair and Cage could not be more different, but they end up comprising two halves of a very entertaining whole that gives Mom and Dad a more solid emotional core than one might have expected from the mind that brought the world Ghost Rider: Spirit of Vengeance. If that film did nothing else to advance the human race, it introduced Nic Cage to Brian Taylor, and that is most definitely a match made in crazypants heaven.

Cage's performance as the egotistical and self-centered put-upon Brent Ryan in Mom and Dad is a showstopper that is on par with his best freak-out films of at least the last decade. If Cage's "Full Cage" performances in films like Bad Lieutenant: Port of Call New Orleans, Face/Off, Kick-Ass, or even Wild at Heart make your heart swell they way they do mine, you're really going to enjoy Mom and Dad. Cage goes from zero to crazy at record speed here, expressing his rage at feeling trapped in adulthood like a rat in a, well, cage by destroying everything he sees with insane gusto. We get enough of Cage's infamous stilted line-readings to feed a million memes (don't be surprised to hear a lot about Sawz-All once the film hits a wider audiences). Cage is to acting what the Neveldine/Taylor aesthetic is to directing, and I'd be very surprised if this relationship doesn't bear further fruit.

While Nic Cage is busy going completely mental, it's Selma Blair as Mom Kendall Ryan who grounds this film far better than any of the director's previous work. The reluctant housewife who has begun to feel as though her life is no longer hers because she surrendered her autonomy in the name of being a good mother, Kendall is almost a tragic figure here. Whereas Cage channels his frustrations into absurd ragey outbursts, Blair's take on the character is distinctly feminine. Her maternal instincts are so strong, in spite of the fact that she secretly feels as though her role as a mother has been her leash, that she's among the last to succumb to the worldwide epidemic, but when she does, she dos so with gusto, and it is her transformation, grand as it is, that really sells the power of the violence.

The basic plot elements of the film are well trodden fare. Some invisible dog whistle like signal comes across the airwaves and slowly transforms the general populace into mindless killing machines, but the specificity of the violence is a unique and fun addition to the long line of films about normal people going mad. Taylor's kinetic direction feels a touch muted from his work as part of the Neveldine/Taylor duo, but it still carries the same kind of urgency that never lets the film get boring. Mom and Dad is a really fun treatise on the stress of parenthood and the ways in which it can warp even the most loving minds now and then. I really dig it and expect that fans of Cage and Taylor's previous work will enjoy it as well, and I expect we will see a newfound appreciation for Selma Blair coming out of this film.