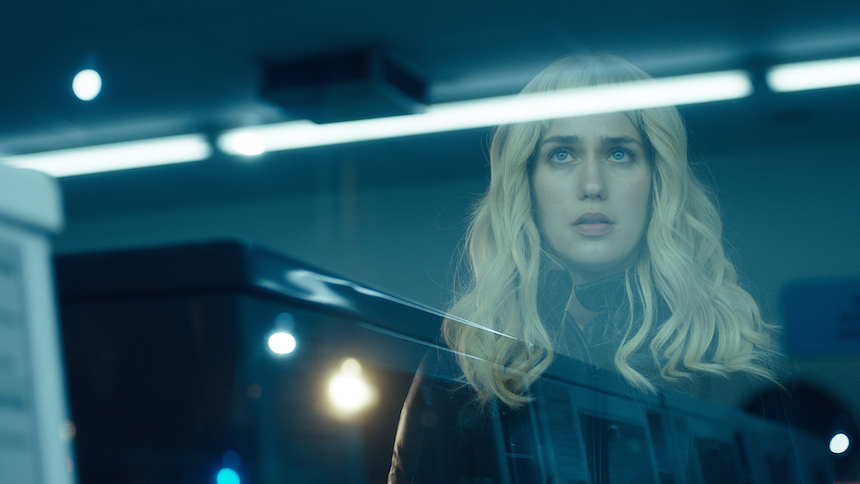 Director Aaron Katz (Cold Weather, Dance Party USA) is back with a film about the entrenched weirdness of his adopted city. Gemini stars Zoe Kravitz as Heather, a beautiful movie star hounded by paparazzi, and Jill (Lola Kirke), her personal assistant who takes care of EVERYTHING for her --- but at what cost?

Heather is also stalked by fans, they show up at dinners and even at her home. She's also threated by her verbally abusive ex-boyfriend Devin (appropriate), who we only get to hear on the phone and by conjecture of other characters. Played by the intense Reeve Carney (Dorian Gray on Penny Dreadful), we only get to see this character in two scenes. Hi background is not spelled out for us, but he appears to be a sociopathic rockstar, and dominates every minute of screen time he does get, played to chilling effect. I'd like to have seen more of Carney, but I wonder if Katz purposely gave him a smaller role to showcase that Devin in tiny doses is more than enough threat to Heather --- and likely, any woman.

To effect, Heather doesn't feel safe, and asks to borrow Jill's handgun. Of course, things go wrong, first as the gun goes off when Jill is contemplating taking it back from Heather. It leaves a mess, shattering the glass coin case left behind by Devin, who owns the mansion Heather still lives in. Next, Jill is off to meet with the director of a film that Heather refuses to do re-shoots on, and must deliver the bad news, as she often does. It's her job to pick up the pieces her self-centered boss leaves behind. One mess that Jill cannot clean up, however, waits for her when she gets back; Heather's body face down in a pool of blood.

Since Jill had the gun in her hand before her morning meeting, she's on top of the list of suspects. As it becomes increasingly obvious that the police are watching and likely about to arrest her, Jill panics and buys a silly disguise --- big trench coat, bucket hat, huge eyeglasses --- and dyes her hair normally brunette hair platinum. It's kind of funny, because women are MORE noticed as blondes, and this move rather makes Heather look like a movie star herself. This is an interesting choice on the part of Katz, a way of saying that in LA, everyone wants to be a star --- even if you're on the run from the fuzz.

Jill takes on the role of investigator herself and hunts down Devin to find incriminating evidence in a scene masterfully constructed with dread. Later, she hears a weird phone call while at Tracy's house, Heather's pop star friend. As the latest in red herrings on this murder mystery adventure, the suspense ratchets up another notch. Finally, because yes, this is Hollywood, nothing is as it seems --- and again, Jill must handle the fall-out in the resulting PR spectacle.

I really enjoyed Gemini --- Katz deftly handled the weirdness of the industry in LA within a smart drama and mystery, also peppered with humor. To this end, he's delivered a tale that is quintessential Hollywood, up there with Sunset Boulevard and Mulholland Drive.

I heard muttering around the festival after Gemini the film is oddly well-received among women and rather poorly to indifferent among men. Is this because it stars two women and is about the struggles women go through in the entertainment industry? Particularly in light of everything that's happened in the last week? If you've seen the film, sound off and let us know; I'm curious.