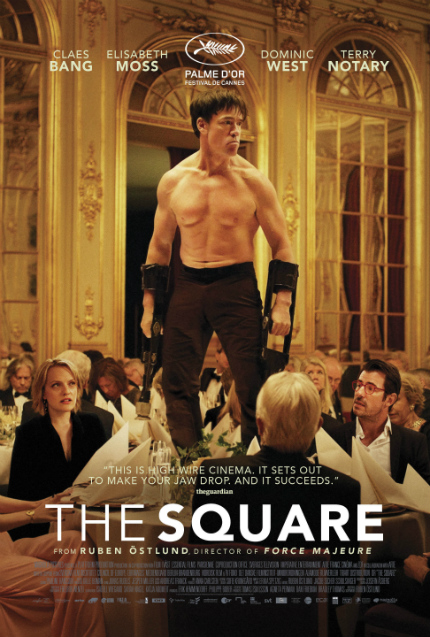 I just watched this trailer and, frankly, I have no idea what The Square is about.

But recently my mind has been opened up by watching David Lynch's Twin Peaks: The Return, and so I don't even know if things like "plot" or "narrative" matter to me this week. What matters is that the film looks crackling, and I love the look on Elisabeth Moss' face as she reacts to something someone else said, and that's good enough for me.

Now, the fact is, the film won an award at Cannes, and a lot of critics wrote a lot of nice things about it, and it's from Ruben Östlund, who made Force Majeure, which I thought, at times, was horrible and then brilliant, so, again, do I need to include the synopsis? I don't know, but it seems like the right thing to do:

Synopsis: Christian is the respected curator of a contemporary art museum, a divorced but devoted father of two who drives an electric car and supports good causes. His next show is "The Square", an installation that invites passersby to altruism, reminding them of their role as responsible fellow human beings.

But sometimes, it is difficult to live up to your own ideals: Christian's foolish response to the theft of his phone drags him into shameful situations. Meanwhile, the museum's PR agency has created an unexpected campaign for "The Square". The response is overblown and sends Christian, as well as the museum, into an existential crisis.

The Square is the official Oscar® entry for Sweden in the Best Foreign Language Film category. Claes Bang, Elisabeth Moss,Terry Notary and Dominic West star. Magnolia Pictures will release it in theaters on October 27, 2017. Please watch the trailer below.

Do you feel this content is inappropriate or infringes upon your rights? Click here to report it, or see our DMCA policy.
Claes BangDominic WestElisabeth MossRuben OstlundSwedenTerry Notary