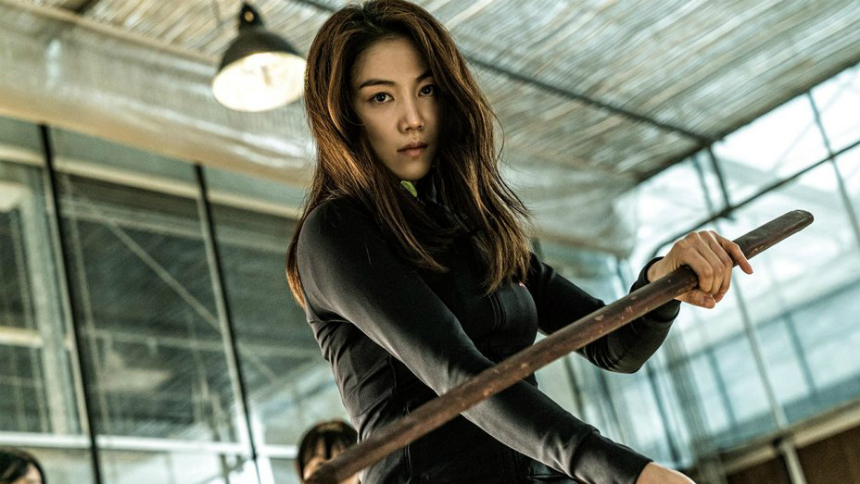 Sook-hee was brought up to become an assassin by Korean-Chinese criminals but after escaping her situation she is recruited by South Korea's intelligence agency to become a sleeper agent for ten years, after which she can gain her freedom. She thus assumes the role of a theater actress until two men begin to disrupt her life, one from the past and one from the present.

With ambitious set pieces filmed in several unusual ways, Jung and his team have gone for broke in their efforts to craft a new kind of action film. The result is certainly something that has never before been seen in South Korea, yet its many elements have trouble separating themselves from their mostly western influences and the speed at which the camera moves (whether in POV or closely tracking the action) and the frenetic pace of the editing can sometimes make for an uncomfortable experience.

The Villainess bears the mark of Kill Bill, yet the vengeful knife-happy female heroine is not the only resemblance to Tarantino's work, as Jung attempts to unpack the story through a complex chronological structure. However, much like its stylistic bravado, the narrative snaps back and forth between time periods with little regard for clarity, which makes things confusing, but mostly robs a compelling lead character of an emotional connection with the audience.

These not-insignificant quibbles aside, The Villainess excels in its action scenes, which include a 10 minute POV intro that pays homage to Park Chan-wook's Oldboy by taking its famed corridor scene and seemingly recreating it on crack and a chase sequence with a trio of bikers engaging in a high speed sword fight in a tunnel. It's exhilarating stuff that barrels forward at breakneck speed and demonstrates plenty of novel tricks as the lead dispatches an endless array of bloodied stuntmen on her quest for revenge.

Kim Ok-vin makes her biggest impression since breaking out in Thirst eight years ago, as she fully immerses herself in the physical and dramatic demands of her role, all with an imposing intensity that is seldom seen in Korean cinema. In the supporting cast, Shin Ha-kyun is in comfortable if undemanding territory as Sook-hee's trainer/husband, Sung Joon dials up the charm as her planted next-door neighbor, and Kim Seo-hyung is cold as ice as the intelligence agency chief who recruits her.

The Villainess is a welcome antidote to the increasingly familiar and polished thrillers that Korea has become so adept at churning out, although one marred by a baffling storyline. Its deliberately overwrought melodrama offers a certain charm yet it surely could have benefitted from a more streamlined revenge narrative à la John Wick, which would have left it all the time in the world to focus on blood, guts and careening vehicles.

Review originally published during the Cannes Film Festival in May 2017. The film opens in select theaters in New York and Los Angeles on Friday, August 25, and expands nationwide in September, via Well Go USA.

More about The Villainess