Tom Sizemore stars in an arid drama, written and directed by Valerio Esposito. 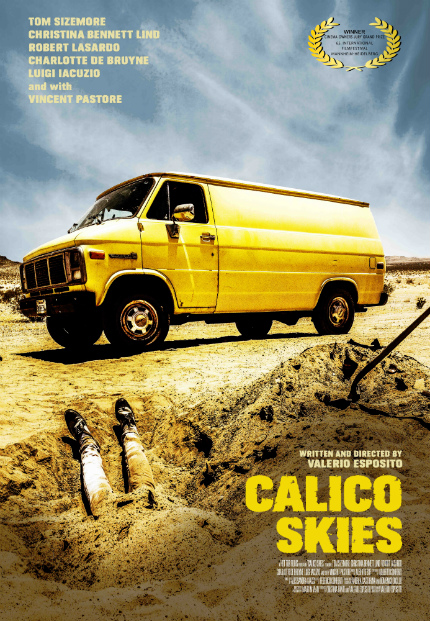 A slight, delicate flower, Phoenix has planted himself in the middle of nowhere.

Also known as the Mojave Desert in California, this particular "nowhere" is quiet, spacious, and sparsely populated. And that's just how Phoenix, portrayed with somber gravity by Tom Sizemore, likes it. He has a daily routine to pass the time, which he follows religiously, shying away from anyone he encounters.

Phoenix's routine includes prescribed medication, and a fastidious fascination with his mail. Adding those elements to his anxious avoidance of outside contact, as well as his apparent lack of employment, it's easy enough to deduce that he's up to something criminal, though he obviously has qualms about it.

When a new mail carrier named Ariel (Christina Bennett Lind) arrives, there is a disturbance in the force. When new neighbors arrive, the crack in Phoenix's routine widens.

The new people who have ridden roughshod into his life are accepted by Phoenix, but the roots of his deep depression lie elsewhere. His past defines who he has become and explains why he lives away from everybody.

Written and directed by Valerio Esposito, Calico Skies has a good sense of place. The High Desert is a region that people tend to love or hate; growing up in a Southern California suburb, I've always been attracted to the look and the sound, though the film rarely plays on those factors.

Instead, it's a stand-in for emotional isolation, representing the distance that Phoenix has imposed between himself and the rest of humanity. It's effective, as far as that goes, but there's not much of a story beyond that.

Phoenix ultimately becomes frustrating as the central character because none of the few other characters rise up to balance his inaction with any meaningful responses until very late in the narrative. By that time, the film has been swallowed up by a feeling of inertia; randomly adding guns and dead bodies to the mix doesn't help.

What is worthwhile is to watch Tom Sizemore in a lead role. He remains extremely capable at suggesting thoughts and emotions with a glance of the eyes or a casual gesture. Without much conflict, though, Calico Skies is limited to a study of quiet desperation in the California desert.

The film is now available to watch on a variety of Video On Demand platforms via Freestyle Digital Media.

Do you feel this content is inappropriate or infringes upon your rights? Click here to report it, or see our DMCA policy.
Christina Bennett LindTom SizemoreValerio Esposito