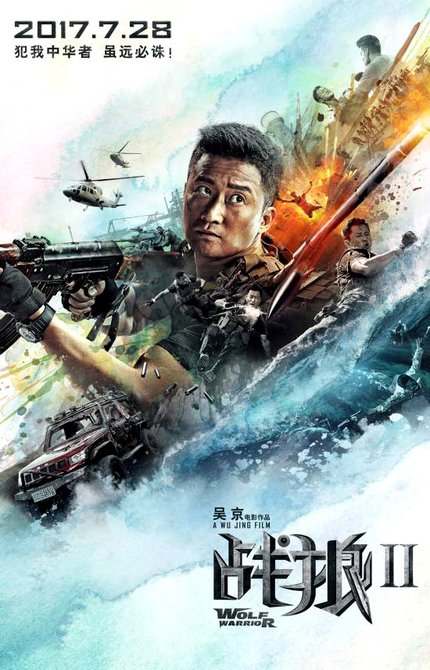 Well GO USA is releasing Jing Wu's Wolf Warrior 2 on a same day and date release in North America and China on July 28th. They smacked some subtitles on a relatively fresh new trailer, a trailer that features more gun cocking, explosions and action than we thought was possible to squeeze into one minute and fifty seconds. Yet here we are. Bask in the orange glows of its pyrotechnics and absurd action sequences. It looks like it is going to be a silly, good time.

The Wolf Warrior is back, bigger and badder than ever, in this action-packed sequel to the 2015 blockbuster hit. With his career in tatters, China’s deadliest Special Forces operative has settled into a quiet life on the sea. But when he crosses paths with a sadistic band of mercenaries terrorizing innocent civilians, he must reaffirm his duty as a soldier and save the day once again. Fists (and bullets, tanks, missiles and much more) will fly in this adrenaline-fueled tour de force of bravura action filmmaking, all culminating into a climatic battle between the Wolf Warrior and the mercenary leader (Frank Grillo, Captain America: The Winter Solider and Captain America: Civil War).

I was smiling like a huge idiot during that entire trailer. Looks like LOADS of fun. Wu Jing is very fun to watch on screen too.

Looks great fun and a lot better than the first film. Here's hoping theres more martial arts this time round, as the fight between Wu Jing and Scott Adkins during the first films finale was way too short.

Another Jacky Wu action flick bring it on!

Looks great! Frank Grillo is always a welcome addition too.