Japan Cuts 2017 Review: THE TOKYO NIGHT SKY IS ALWAYS THE DENSEST SHADE OF BLUE, A Maudlin if Earnest Tale 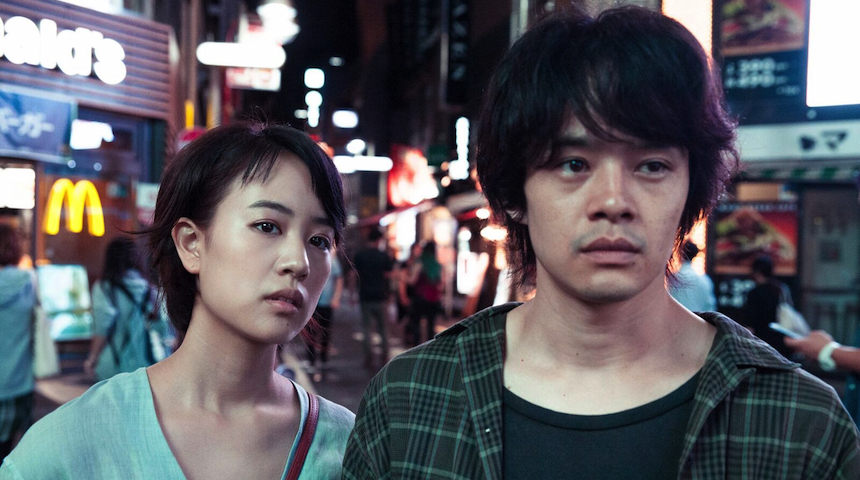 Like its long, declarative title, Ishii Yuya's new film is a curious work that stumbles towards earnestness. Sometimes it is poetic and ponderous. At other times it is just plain tedious and twee.

Best known for the off-beat, up-beat Sawako Decides with Mitsushima Hikari, Ishii presents The Tokyo Night Sky is Always the Densest Shade of Blue as a “bright lights big city” drama that holds great reverence for the things that feel forever untethered and amiss in our lives. Namely that nearly indescribable feeling that could represent both death and love... all within the same instant.

It is in such a state that we meet Mika (Ishibashi Shizuka), an introspective, morbid woman who works as a nurse by day and at a girlie bar at night. By the odd happenstance one seems to only experience in a city, Mika keeps running into the forlorn if talkative Shinji (Ikematsu Sosuke), a day laborer prepping for the 2020 Tokyo Olympics. Stifled by the menial, unsatisfying nature of their work and the specters of past love, Mika and Shinji gain a strange, sad respect for one another over a series of late night walk-n-talks.

Some shaky mechanics may test audiences' patience for finding the convincing sense of loneliness that lies at the heart of the film. In one moment Ishii’s touch is contemplative, solemn even, finding a wistful beat to pause on before spinning you around straight into the kinetic, digitized madness of the Tokyo streets, its citizens dead-eyed and locked in on their cell phones.

These tonal shifts aren’t supposed to feel grounding. But even within this bi-polarity of urban living they don’t always feel cohesive. Certain tricks, like the abrupt isolation of a sound, or the elimination of sound entirely, work well to suggest our characters‘ alienation, while others, like the split screen POV of Shinji’s good eye and blind eye feel clunky, obvious and uninteresting.

What holds us to this slowly tilting tale is the careful way in which the instantly watchable Ishibashi and Ikematsu create the chemistry between their love lorn characters. Mika and Shinji are highly philosophical people who live in a society that does not know how to accommodate let alone reward them. Eventually, this friendship forces them to face the darker parts of themselves and the place where they live: a country that is experiencing straight up post-traumatic stress.

...Night Sky... is a film that both lives and dies by its dualities and contradictions. While its dramatics can feel awfully muddled and maudlin, with supporting stories that never earn their screen time, its central narrative manages to balance a mood that is equally fearful and hopeful, suffocating and expansive.

Playing out across an impressionistic cityscape and in the bruised hearts and minds of Mika and Shinji, Ishii’s drama shelters the deep sadness and swelling desire of a generation caught in a limbo they may never be able to escape. And if that's the case, the film asserts, then it may be best to find someone to share it with.

Bowing in the 2017 Berlinale's Forum section, The Tokyo Night Sky is Always the Densest Shade of Blue has its North American premiere as a part of Japan Cuts: Festival of New Japanese Film on July 14th at Japan Society in New York City. Click here for more information and to purchase tickets

Do you feel this content is inappropriate or infringes upon your rights? Click here to report it, or see our DMCA policy.
Ikematsu SosukeIshibashi ShizukaIshii Yuyajapan cutsjapan cuts 2017Shizuka IshibashiSosuke Ikematsuthe tokyo night sky is always the densest shade of blueYuya Ishii