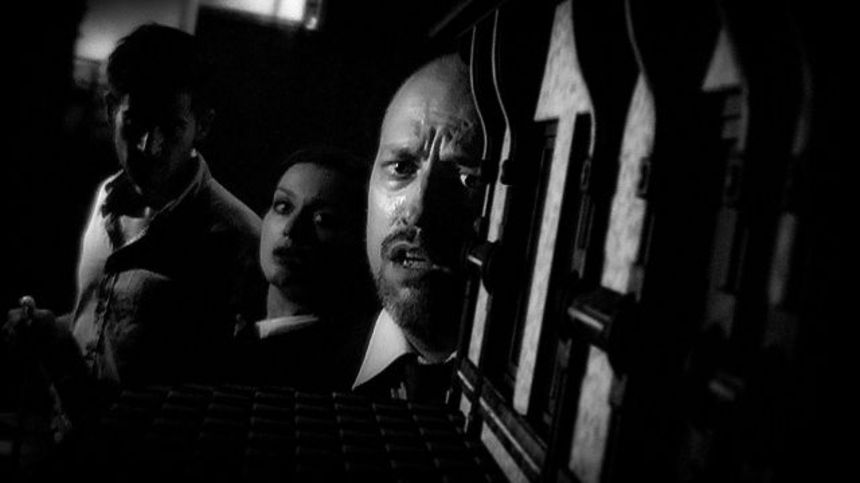 The Laplace demon is a mathematical theory, which supposes that, if someone knows the precise location and momentum of every atom in the universe, they could predict everything down to the smallest detail. Quite a creepy supposition (hence 'demon'), and the basis for The Laplace's Demon, a strange nightmare and philosophical exercise, a kind of extended Twilight Zone episode that evokes Rod Sterling, Agatha Christie's Ten Little Indians, classic gothic tropes, and Italian-style noir.

A team of scientists, who believe they might have cracked the code, are invited to the mysterious island home of the renowned and reclusive Professor Cornelius. Arriving at the luxurious mansion, their host 'introduces' himself via videotape, and tells them they are part of his new experiment, trapped in the mansion (along with their ferryman) until dawn. As they try to figure out the game, they begin to disappear one by one, literal and figurative pawns in the Professor's twisted game.

I say literal pawns, as inside the mansion they find a miniature of that mansion, and inside small pawns from a chess set; these pawns move exactly as the characters do, and they track each other's movements through the house, and attackes on them by the queen. This inventive production design, this film within the film, adds a ingenious level of mystery and fear. Add to this the use of rear projection, which is only noticeable at certain times and not in a bad way, this film becomes as much theatre as movie.

Evoking a bit of early Mario Bava-style giallo, in combination with noir sharp light and shadow, gives this film an unusual, slow burn flair. The acting style is slightly heightened, a bit of exaggeration in a particular Italian style, making the characters arguably somewhat one-dimensional, but this is not necessarily a detriment. It fits into the balance between philosophical discussion of fate and free will, and running for their lives.

At 107 minutes, the film does begin to drag a bit; in a suspense film, if the audience gets too many steps ahead of the characters' knowledge, it can be a bit dull to wait for them to catch up. And it does get slightly tedious when the Professor shows off his ability to predict everyone's behaviour (again, getting too ahead to be suspensewful enough at times).

But these are fairly minor quibble. With its use of old-school methods such as rear projection, practical effects, canter angles and low-key lighting to evoke its sense of dread, The Laplace's Demon finds interesting and creepy ways to explore human actions.

Do you feel this content is inappropriate or infringes upon your rights? Click here to report it, or see our DMCA policy.
Duccio GiuliviFerdinando D'UrbanoGiordano GiuliviItalySilvano BertolinCarlotta MazzonciniMysteryThriller