Fantasia 2017 Review: FRIENDLY BEAST, Man Is the Most Dangerous Animal 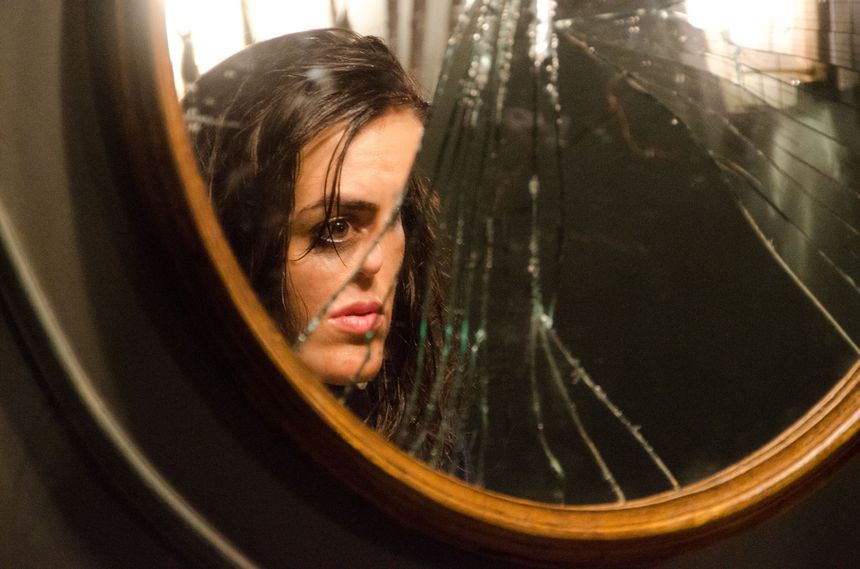 It's nearly closing time at a struggling restaurant. The waitress, Sara (Luciana Paes) and kitchen staff just want to go home, while the boss, Inácio (Murilo Benício) struggles with money troubles, a nagging wife, and a desire for power and control in his life.

A difficult couple enters, wanting a full meal, and Inácio forces the staff to keep working. Enter a pair of robbers, and the situation gets worse; but not as bad when the boss is able to get the upper hand, and suddenly an already dangerous situation turns deadly as sides are taken and people turn to the most abhorrent behaviour in the blink of an eye.

Thus begins Friendly Beast, the debut feature from Brazilian filmmaker Gabriela Amaral Almeida. It's a taut thriller, a harrowing horror, and a keen insight into the pettiness of humans, how easily the surface can be scratched and animal instincts can take over. Making full use of a cramped space and muted interiors, examining class struggle, sexual desire and violence, and the need for the smallest semblence of power, Amaral Almeida has crafted a intense film, one that barely leaves room for breathing, with twists that lead to the darkest, but inevitable, places of the human heart.

Amaral Almeida sets up the scenario, and the characters, with simple yet effective moments: a slight and momentary skin lets us know that Sara is secretly in love with Inácio; the too-amourous couple, Bruno (Jiddu Pinheiro) and Veronica (Camila Morgado), with a few lines show their believed superiority to anyone who serves them, and the power of their money to keep the staff waiting, including the chef Djair (Irandhir Santos). When the thieves enter, they waste no time not only robbing, but sexually harrassing the women, showing the men around them as almost indifferent to their plight.

The sudden switch of Inácio, once he is in control of the situation, is perhaps a little too quick; but again, Amaral Almeida wastes no time in letting her characters' inner animals come out. Inácio, expecting a food critic the following week, practices what he will say in the mirror, and insists that Djair serve red meat. These moments then reflect later in the script, as the audience is given just enough time for the truth of what is about to happen to surface, before all hell breaks loose again.

As Inácio's actions (and Sara's complicity) become more frightening, so the camera is kept tight on faces and bodies, even in the relatively spacious kitchen and dining area. They are these animals trapped, scared, waiting their possible (and probable) execution, while with a deeply uncomfortable yet brilliantly shot and performed moment of anger-fuelled sex occurs. These animals are not necessarily clever, but combined with human lust and rage, it's impossible to look away.

Stirring with desire and anger, aiding by a stellar cast, Friendly Beast is as rich in texture and detail as the meat and blood on display: it's all there for the taking, to whomever desires and holds onto it, even if the possession drives them insane.