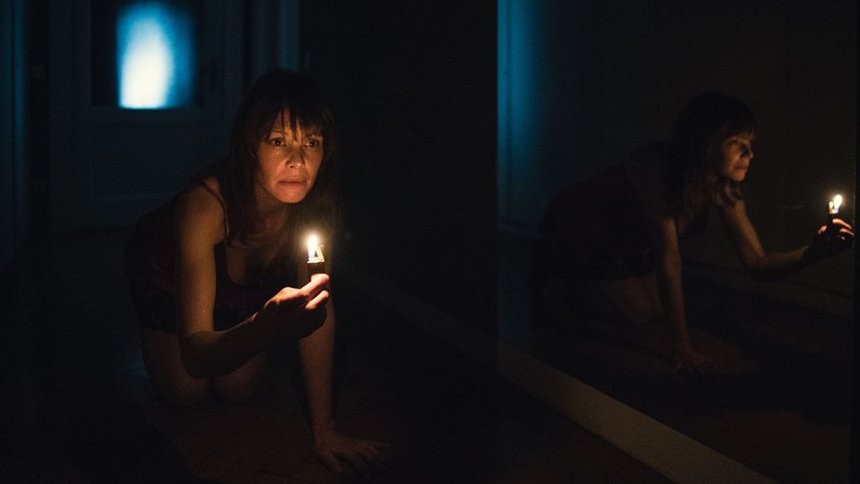 What is the temporal geography of pain and regret? If we remove ourselves from the physical space where something bad happened, do we distance ourselves from the pain? Or is that pain carried within, embuing each space a person enters? Greg Zglinski's Animals is a surreal dream/nightmare that looks at the pain of infidelity, the delicate matter of regaining/refinding trust and love, and the spaces which we occupy in our pleasure and pain.

Anna (Birgit Minichmayr), a children's book author, and Nick (Philipp Hochmair), a celebrity chef, are taking a six-month break in the Swiss countryside; in part, to get over Nick's affair with their neighbour Andrea, and allow Anna to get back to work on her novel. An car accident on the way to their chalet, in which they accidently kill a sheep and Anna sustains a slight head injury, sparks strange events and some questioning of reality. At the same time, the woman looking after their apartment in Vienna, Mischa (Mona Petri), is mistaken for the now-dead Andrea, and is stalked by a strange man.

While the story might sound like a Euro-erotic-thriller, Zglinski concentrates more on the strange temporal flux and mistakes of identity that cause the movement between spaces. While Nick claims to be visiting other chefs, Anna tries to find, which leads her down a series of corridors (is it a restaurant? A brothel? Her own apartment in Vienna?), and her thought that she has only just arrived, not been there for two weeks as Nick claims. Throw in a talking cat (far more creepy than should be allowed) and you have a dream of the Lynchian variety: too strange to not be believed.

But is this Anna's dream, or Nick's, who cannot place his wife in his day-to-day activities, and keeps getting mysterious phone calls? Zglinski keeps the audience guessing, so we feel that we perhaps also hit our head in an accident and are trying to find a temporal logic to events. Add to this Mischa story, as she is subject to mistaken identity and almost seems to be living out the dead woman's final days, and Zglinski and screenwriter Jorg Kalt eschew easy answers for an atmosphere of tension and sexual drive, almost as though the characters were caught in some weird limbo between heaven and hell.

Tinged with a soundscape that feels as though someone is whispering over your shoulder, and a conclusion that could very well be just the beginning again, Animals doesn't classify itself easily, with nods to Hitchcock, Polanski, and Lynch all ripe for keeping academics busy . With a clear grasp of suspense as well as the intricacies of relationships that keep everyone guessing, Zglinski favours mood over even his more-than-adequate substance.