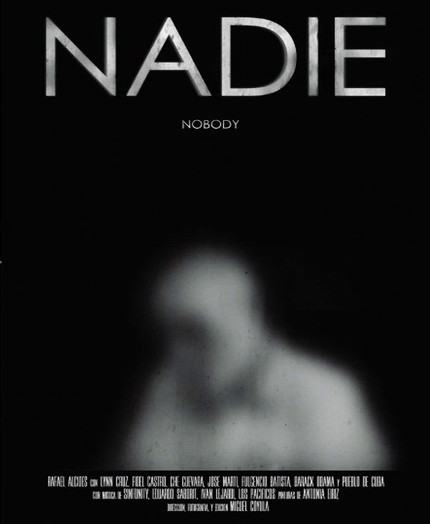 The ever-present reality of our own mortality is made only clearer when witnessing the fatality of our loftiest ideals by its champions. What Cuba has endured leading up to, during, and in the succeeding years since the Revolution of 1959 is a perfect storm of this idealistic swell and subsequent decay. Director Miguel Coyula (Red Cockroaches, Memorias del desarrollo) returns with his signature surrealist style and temporal editing to take the expressive memories of the revolutionary poet Rafael Alcides and dive deep into the very heart of the Cuban people. Nadie is a haunting adventure, pulsing with a vibrantly unique vision and methodology that results in a film as cerebral as it is emotional.

Rafael Alcides was a celebrated writer of the Cuban revolution. However, his disillusionment and rejection of Castro’s government forced upon him a stifling anonymity and he is currently salvaging what he can from his unpublished works as their homemade ink is literally fading off the pages. This current crisis is the springboard from which Coyula weaves Alcides’ poetic remembrance of what the revolution was, what it could've been, and art’s connection to the revolution as aid and adversary. This extensive singular reminiscence of love, deception and possibilities almost come to embody the culture of Cuba itself, embracing the height of its dreams and the pits of its realities.

Throughout the film, an intense auteurism crafts an impressionistic aesthetic to accompany the recollections of a broken heart mirroring a contemporary cynicism. Superimpositions, digital image manipulation, visuals pulled from both Coyula and Alcides’s lives, and Alcides participating in imagined conversations and confrontations all add dense layers of complexity to the painting Coyula constructs. Upon this is heaped numerous allusions to the manipulation wrought by film, accompanied by distinctive classical scores and appropriated footage and sound from Hollywood movies such as Dracula (1931) and Citizen Kane (1941). The film never once relies on conventional storytelling, seeming almost reactive to when Alcides says, “I don’t like biographies”, and this film isn’t a biography.

Each step of the story propelled by Alcides’ words is simultaneously injected with Coyula’s emotions and ideas, impressing that we are accompanying them equally through this story. As the film concludes, its as if Werner Herzog had hired Andrei Tarkovsky to be his editor; the comprehensive ideas are sincere, thought-provoking and chilling, a resounding importance with every protestation made, but nothing as clear-cut as it seems. Every moment possesses significant weight and Coyula elevates the docu beyond just a unique historical account to an evocative discourse in the evolution of worldly humanist values and the roles of art and poetry. Nadie is an irrevocable achievement in documentary filmmaking and should be seen as a benchmark from which the industry should emulate and evolve.