Review: THE BAD BATCH, Left Behind by the American Dream 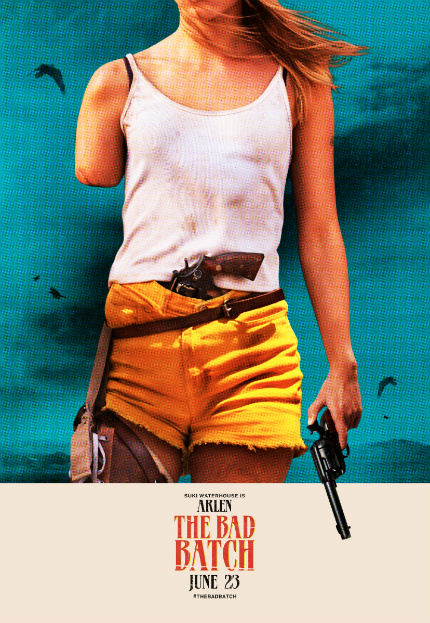 Real credit where it’s due, Ana Lily Amirpour’s self-confessed "Iranian Vampire Spaghetti Western" A Girl Walks Home Alone at Night must have been a hell of a tough act to follow, so props to Amirpour for pulling it off in such style.

Her latest offering is a very different beast too, and never looks back over its shoulder unnecessarily. Gone is the gorgeously stylized black-and-white footage and tense, cocaine-fuelled atmosphere of that last masterpiece. In their place comes much more of an LSD aesthetic, full of neon lights and a vibrant colour palette that wouldn’t seem out of place on California’s Long Beach.

The Bad Batch also has an absolutely killer soundtrack, including stuff like Die Antwood’s Fish Paste, which is certainly not the kind of reference points you might expect from a dystopian piece of fiction that eerily seems to presage a kind of brutal Trumpean new order. But it’s precisely the sort of thing that makes this so good.

The film’s opening is similarly a buzz of confusing security warnings and barked commands by some kind of law enforcement force. These manic shouts fade in over a young woman having a “Bad Batch” number roughly tattooed behind her ear, and next we see this twenty-something being driven out and dumped on the wrong side of a giant fence. There it is… That wall that Donald Trump’s terrifying pledges for change so prominently keep filling our thoughts with – right in front of our eyes.

Beyond that lies a sign informing all that pass that they are entering a penal colony in Texas where no US jurisdiction offers protection. Further still in the background lies a flat open desert – just as it did in A Girl Walks Home Alone at Night – clearly an ever-haunting part of Amirpour’s ingenious Iranian imaginary. But in this odd-ball thriller, the desert is a place of absolute despair. We see a world where people are literally being downgraded from citizens, and cast out to fend for themselves like a kind of massive social cleanse that targets criminals and immigrants, the poor and the sick.

It’s a barren vision that feels like an instantly classic homage to George Miller’s Mad Max, and whilst it shares that movie’s dystopian view and anarchic dark humour, The Bad Batch definitely goes its own way. Forever the master of visual storytelling, Amipour creates often almost dialogueless scenes that draw from a very different kind of modern New World culture to Miller, and she dissects this culture with clinical ease.

Without ever telling us much more than the fact that the film’s protagonist is consigned to the “bad batch,” Amirpour and costume designer Natalie O’Brien flawlessly express their central character Samantha, played by a convincing Suki Waterhouse. She’s a tough, skater-chick type, glowing with the perfection of clearly misspent youth, and every aspect of her appearance seems carefully studied and chosen.

She wears bright, white Converse and skimpy, tie-dye shorts; on her back sits a rucksack with all the stitched on labels and emoticons you’d expect, and on her head lies a baseball cap that (brilliantly) has one fist punching and another popping you the finger. More telling still are the words tattooed on her body: “FEAR” across the knuckles of her right hand, and “Suicide” on her upper left arm. Without a single word, we know almost everything we could possibly need to know about the culture Samantha comes from, and the kind of forgotten, delinquent generation she represents.

What isn’t clear, however, is how individuals like Samantha will fare in Amirpour’s sort of post-Trumpean world. That answer soon comes in the form of a wonderfully dark humoured golf cart. It carries two muscle bound men who bear down on the rapidly fleeing girl. A struggle ensues and she blacks out - but when she comes to, the screen becomes a stage for a scene which could perhaps only be described as not unlike Saw.

In other words, grim, and it becomes apparent that she is being held by a colony of muscle men (and women) who divide up their time between doing colossal pumps and eating humans. What follows is a struggle that effectively evolves into a stripped down chase sequence between these two sides after our desperate hero abducts the daughter of an enormous gym fiend.

This is very much a literal dog eats dog take on Darwin’s survival of the fittest, but in Amirpour’s hands it is also pretty clever. Firstly, it’s clever because it’s quite rare for you to see a thriller where the main character is anything other indestructible, and in this film it at least feels touch and go. Secondly, while this character may fall into the strict or typical Hollywood ideas of beauty, she doesn’t succumb to the weakness and victimization that so commonly tends to go with female characters in this kind of mainstream cinema. Samantha is one streetwise tough cookie, and even after the loss of several limbs (another reference to Mad Max?), she does not take shit lying down.

The loss of her limbs also proves to be quite a powerful example of how The Bad Batch begins to subvert aspects of the modern culture. Sure Suki might start out looking like the kind of actress you're probably going to see in every fictional film you see this year, but before long she’s a multiple amputee. Now, I do think would be hasty to say a Hail Mary and call a white, able-bodied actress who has been made to look disabled an instance of the film being progressive, but it is an interesting example of the kinds of jabs at mainstream body image culture that Amirpour delivers in this movie.

Rather brilliantly, even amongst a situation of life and death, you can clearly see our main character still struggling with the way her body now looks. Equally the muscle men she first runs into seems a clear snipe at the kind of body building culture that seems so strong both in the US and elsewhere. On top of that, The Bad Batch also contains much more explicit attempts to satirize American culture.

Upon entering “bad batch” country, Samantha even finds a pamphlet that reads, “Find Comfort, Find the Dream.” When she finally does find what turns out to be a small, run down town called Comfort, it appears to be not unlike a Burning Man Festival gone horribly wrong. The community seems entirely made up of the kinds of people the American Dream leaves behind. And it actually turns out that what these people seek – dressed in an assortment of kooky, psychedelic clothes (one man even sports a rather excellent Statue of Liberty costume) – is actually a regular hit of LSD dealt by an unusual king.

This iconoclastic king is rather gloriously a southern-drawling, podgy Keanu Reeves, who unmistakably resembles Elvis. And the dream he sells is little more than a giant DJ booth, the occasional rave and a healthy supply of opiates, for which, in return, he exploits the town’s women and surrounds himself with an entourage of heavily armed pregnant women who wear t-shirts that read, “The Dream Is Inside Me.” This is the kind of subtle, but scathing jibes about where the world is heading which The Bad Batch delivers in spades, and I definitely think it reminds you why Amirpour is such an exciting and sharp-witted director.

She definitely deserves awards; you just have to wonder from which direction they’ll come. She’s certainly (and perhaps sadly) taken firmer steps towards the kinds of projects that will be considered more suitable to global audiences. It’s not necessarily a pity in this case, but it would be nice to see her also go back and do more stuff like A Girl Walks Home Alone at Night in the future. Either way, let us hope Amirpour’s reign as a brilliant director may continue for a long time still to come.

Review originally published during the Venice Film Festival in September 2016. The film opens in select theaters in the U.S. on Friday, June 23.

Do you feel this content is inappropriate or infringes upon your rights? Click here to report it, or see our DMCA policy.
Ana Lily AmirpourDiego LunaJason MomoaJim CarreyKeanu ReevesSuki Waterhouse

More about The Bad Batch