Review: ONCE UPON A TIME IN VENICE Makes You Remember Other Times

Bruce Willis' new action comedy is not an epic fail, but it fails to contain anything epic. 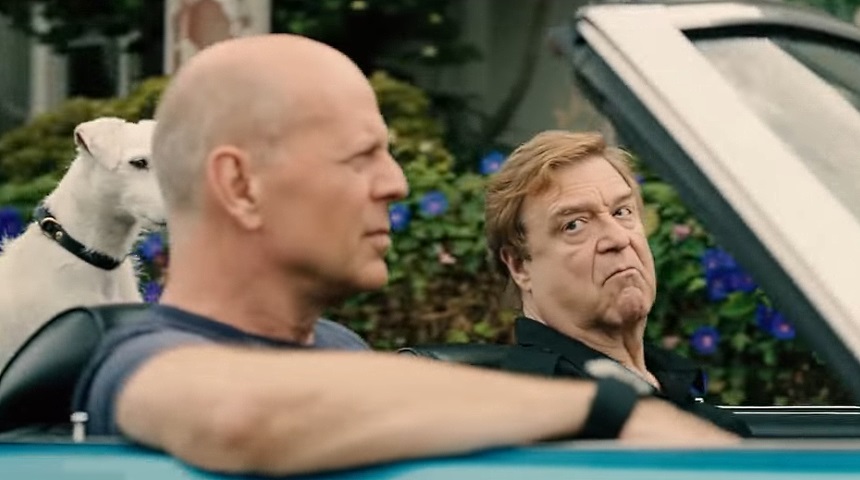 Today marks the release of a new action comedy with Bruce Willis, and a curious thing it is. Once Upon a Time in Venice sports a truly incredible cast, who are then placed as cartoon characters in a shallow pastiche of crime stories. Enter a world where every person is defined by stereotype, yet still gets introduced by a narrator.

The plot revolves about Bruce Willis' character Steve, a private detective in the Venice Beach area of Los Angeles. Steve's life is a bit of a mess, and together with his wimpy nerd assistant John (Thomas Middleditch) and old friend Dave (John Goodman) he tries to solve a number of weird cases. These range from finding a local missing beautiful young sex addict (hint: she's in Steve's bed), to stopping a graffiti artist from decorating a building's facade with pornographic images. On top of this, Steve's dog Buddy gets stolen by junkies, and as he rolls with the (many) punches, the cases get more and more interconnected.

Before you know it, these shenanigans result in Steve skateboarding for his life (while naked), being chased by hookers and transvestites, getting the back of his head painted blue, and increasingly pissing off every major gang in Venice Beach. Whoops...

If this sounds exciting or fun, that's probably because it should be, but the end result never quite hits the "cool" factor it seems to aim for. For starters, none of the stories really pack much of a punch, and the characterization has some major problems. All men are either old assholes, violent body-builders or wimpy nerds. Worse, all women are delectable yet untrustworthy sex objects, dependent at best, lethally conniving at worst. Don't even try to perform any sort of Bechdel test on this film...

Once Upon a Time in Venice is not entirely bereft of charm though. Written and directed by the brothers Mark and Robb Cullen, the film does feel at times like a labor of love, an homage to the noirs of old. And most actors do get a few moments to shine. Jason Momoa gets a couple of good laughs in as the local drug dealer Spyder, obviously having as much fun with his paper-thin role as he can. The always reliable John Goodman works wonders with almost nothing. Bruce Willis can do this in his sleep. Cameos abound, though these often make you wonder. Famke Janssen shows up in a few scenes and I don't think her screentime exceeds a minute. She's literally there only to be "Steve's-divorced-sister-who-he-cares-for", with NOTHING to do, and that's a waste.

Watching a film in this genre and with such an ensemble cast brings many memories of excellent other titles with it (always risky), and that's even without the deliberate references. Hell, the title itself alludes to many an epic classic, and is almost an unwise dare to start comparing.

But with its setting, the reliance on stereotypes, the many "side-quests", the smarmy ooo-we're-so-daring atmosphere and the consequence-free action (unless the script suddenly demands otherwise), Once Upon a Time in Venice reminds me most of Grand Theft Auto V. It's like seeing that videogame played by someone else, and while good for the occasional chuckle, sometimes you just want to yank the joystick from this person's hands and choose a cooler path...


RLJ Entertainment releases Once Upon a Time in Venice in theaters and on VOD and Digital HD today,June 16, 2017.

More about Once Upon a Time in Venice