Review: MOKA, a Subtle Revenge Thriller on the Shores of Lake Geneva 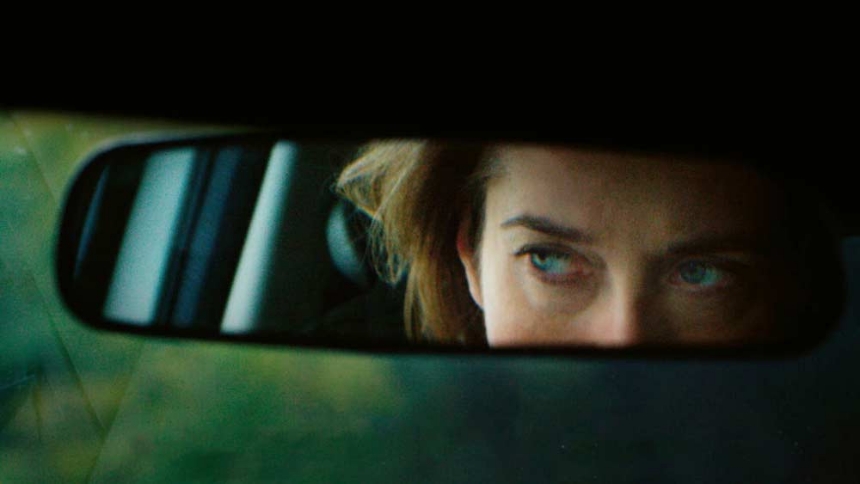 A new French/Swiss revenge thriller, Moka, directed by Frédéric Mermoud (directed many episodes of the 1st season of The Returned/Les revenants, a popular French TV series) starts with a 5-minute breezy, silent sequence of Diane (Emmanuelle Devos, Read My Lips, Kings and Queen) sneaking out of what seems to be a hospital/wellness sanitarium near Lake Geneva. It's dark and moody and sets the tone of this slow burn, Chabrol-esque revenge thriller.

It turns out, Diane is a grieving mother whose son was killed in a hit-and-run in Lausanne, the Swiss side of the lake. Through a hired investigator, Diane narrows down the facts that the driver and the passenger, a blonde woman and her male companion, were driving a coffee colored (hence the title) vintage Mercedes. She settles on a beautician named Marlene (Natalie Baye, Tell No One, La Balance) and her younger, womanizing boyfriend Michel (David Clavel) with the matching car living on the French side of the lake, in Evian. Diane's obsession makes her plunge head first into the lives Marlene and her family.

Diane approaches Marlene unassumingly, guising herself as a writer in seeking seclusion by the lake side. Marlene takes her as a nosy writer-type in search of inspiration and keeps her barrage of personal inquiries at arm's length at first. But she finally lets her guard down at Diane’s genuine demeanor.

She also approaches Michel as potential customer as he tries to sell the car. Diane’s aggressiveness in her interests in the car turns on Michel in all the wrong ways. After chance meeting with a good looking young drug dealer on the ferry ride, she charms him to get a hold of a handgun. And the two get romantically involved.

Diane then befriends Marlene’s rebellious young daughter Elodie (Diane Rouxel) who might have been carrying on a sexual relationship with her stepfather.

Based on a book of the same name by best selling author Tatiana de Rosnay (whose book, Sarah’s Key, was made into a film starring Kristen Scott Thomas in 2010), and relocating its setting to Lake Geneva, Moka, like its neutral colored vehicle and with its picturesque and quiet Swiss setting, is all a very subtle affair. Somberly lensed by Irina Lubtchansky (who shot two recent Anaud Desplechin films- My Golden Days, Ismael's Ghosts) against stunning Lake Geneva backdrop, the film is a handsome, brooding noir.

It is a deftly directed, low-pitched noir that heavily relies on the charm of Devos. As always, she walks the fine line between confidence and vulnerability and makes Diane's unrelenting pursuit of revenge totally believable. With quiet determination and stubbornness in her eyes, she is one of the few actresses who can turn their dowdiness into sexy.

Baye, a veteran actress, gives a fine performance as an ordinary woman dealing with her career, motherhood and relationship. Her Marlene's guarded friendliness hides her dormant venom which we get to see a glimpse of.

It's great to see two women in their mid-career finding juicy roles that show their subtle artistry. The film hints on the fraternity of womenhood by the end. Moka is a well acted, low-key but impactful revenge thriller for the fans of neo-noir.

In conjunction with the opening of Moka, the French Institute Alliance Française (FIAF) will
present the CinéSalon series Enigmatic Emmanuelle Devos, with screenings of the actress’s
films every Tuesday in June & July – beginning with Jacques Audiard’s Read My Lips. The series also includes Arnaud Desplechin’s My Sex Life...or How I Got Into an Argument and Kings and Queen among others.

Dustin Chang is a freelance writer. His musings and opinions on all things cinema and beyond can be found at www.dustinchang.com