Now on Blu-ray: Open Your Mind, Step Into THE VOID 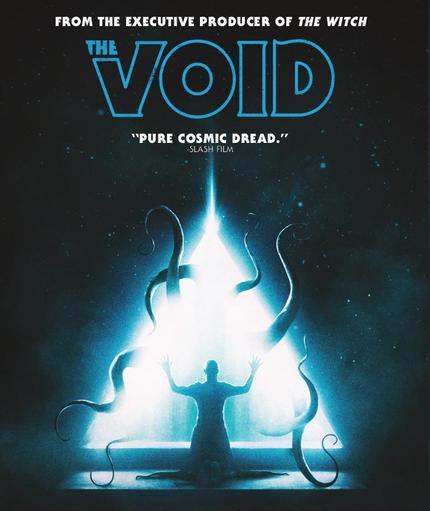 Today marks the Blu-ray release of Steven Kostanski and Jeremy Gillespie's new horror film, The Void. Regular Screen Anarchy readers will recognize the co-directors as members of the renegade Winnipeg cinema collective Astron-6, but The Void is their first feature outside of that collective and it feels like a whole other beast.

When a young cop named Carter (Aaron Poole) picks up an injured man on the side of the road and drives him to the nearest hospital, he has no idea that he's in for the night of his life. Working at the hospital, which is in the middle of packing up to close its doors, is his estranged wife Allison (Kathleen Munroe), and if the tension between them weren't thick enough already, a number of strange happenings and violent outbursts drag the night from bad to worse.

Beyond the tension there is an encroaching terror outside of the building that seems drawn to whatever malevolent force is making the inside go crazy. Hooded figures in matching clocks surround what has turned from hospital to bloody abattoir where nothing is exactly as it seems. A supernatural force is taking over everyone and everything and very soon, they'll see the void.

As members of Astron-6, Gillespie and Kostanski are experts at homage and spoof, but with The Void they aimed to create an original experience that utilizes their talents in a new way. Rather than explicitly spoofing the tropes of the haunted house movie, they wanted to create their own new film.

The first time I saw The Void at Fantastic Fest, I was a bit let down, but I chalked it up to the fact that it was an 8AM press screening after a long night of movies and beer. With this rewatch, my feelings toward the film have softened and I was able to enjoy it a bit more, but not without a few niggling irritations.

The film starts at a tension lever of 9/10 and goes to 11/10 without every letting up. This level of intensity throughout gives the characters little time to breathe and develop. Even with similar films the characters have softer moments in which they are able to express themselves and give the viewer an idea of who they are, rather than just what they do.

The film also leans a bit too heavily on its influences at times. If you've seen Assault on Precinct 13, The Beyond, House by the Cemetery, or The Thing, a lot of The Void will feel very familiar. Much of the film is built explicitly around ideas and even shots from those films. In an Astron-6 film, those moments are welcome, however, I think The Void overuses them from time to time, leaving it feeling more generic than it needs to.

On the bright side, the film looks exceptional and the talents of Kostanski and Gillespie translate beautifully to this darker, more serious tone. The writing is quite solid, the characters feel real, it's just the dynamics that feel underserved. One place where no one can fault the film is the outstanding quality of the physical effects. With Kostanski having worked on massive FX heavy films like Suicide Squad, Crimson Peak, and Hannibal (TV), it's very clear that he knows his stuff and the opportunity to show it off on his own creations isn't wasted here.

I really liked The Void, it's a fun film that provides several solid scares in a familiar feeling package, but different enough to make it a worthy addition to the canon.

The Void comes to Blu-ray from Screen Media in an exclusive edition sold only at DiabolikDVD.com. There is a domestic DVD release that can be found at the usual retailers, but with a film that looks this good with these effects, Blu-ray is the only way to go. The image looks as spotless as one would expect from a modern production and the sound is very effective. The only concern that people might have is the brightness level, but it's no fault of the disc, The Void is a very dark film, and the Blu-ray beautiful recreates that experience.

In terms of extras, the US release of The Void has a very exclusives. There are a pair of audio commentaries, one from directors Gillespie and Kostanski and a second with the FX team behind the project. Both commentaries are very good and the teams are all very enthusiastic about their hard work. There is a behind-the-scenes featurette called Nightmare Logic: The Making of The Void, which goes into significant depth regarding the challenges of funding and shooting the project. Everyone involved was passionate about the project so it's great to hear their side of the story of The Void's creation. The one thing that is conspicuous by its absence is the original concept trailer, which only appears in snippets in the featurette, apart from that, this is the best home video release of the film so far.

The Void is a great new film that deserves a look, and if you're going to watch it, you owe it to yourself to have the best experience possible and that comes from this Blu-ray, available only at DiabolikDVD. Check out the link below to buy.