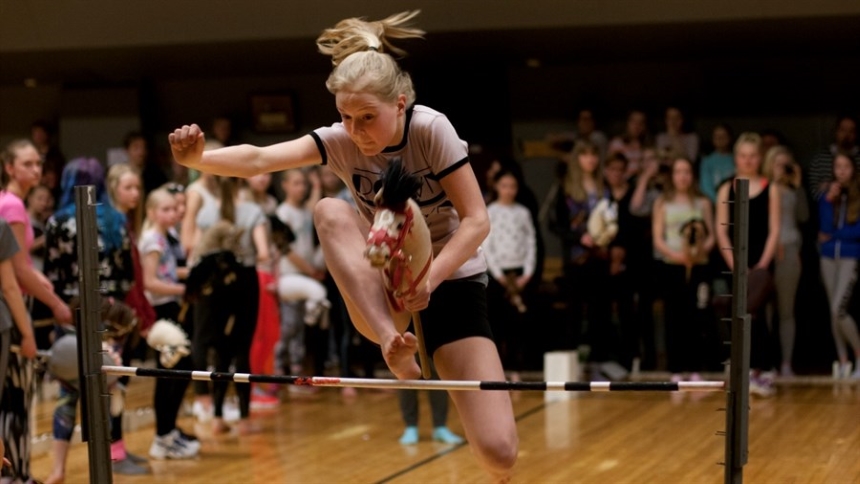 Dressage, in equestrian terms, is the art of riding and training a horse in a manner that develops obedience, flexibility, and balance. It factors significantly into Selma Vilhunen's documentary on the most curious of Finland subcultures, one involving hobbyhorses and (mostly) tween girls.

Over the past decade hobbyhorse riding has become a bit of a 'thing' and a way of life for thousands of young people. It is a cliche to say that every girl goes through a horse phase, but the girls, here "Hobbyhorseists," spend their time training, and they train pretty hard, for obstacle courses and dressage competitions riding that ubiquitous children's plaything, a horse head on a stick.

It is all quirky and charming, of course, but Vilhunen, who was nominated for an Oscar with her 2014 short comedy, Do I Have To Do Everything Myself?, uses this bizarre subculture as a looking glass to examine the intensity of the mindset children, particularly girls, at an age, where everything is, like, the most important thing ever. The girls are in that transition period where we are told to put away such childish things, for the responsibilities and issues start arriving with increasing stakes. But these girls cling to and adapt their evolving identities in interesting, complex, ways.

Vilhunen follows three very different girls, Aisku, Alisa and Elsa, all between the ages 14 and 16, as they prepare for, and participate in, hobbyhorse competitions. Aisku, a girl of colour, is in a youth home, and often runs away (and gets in trouble) to train other girls or practice her own riding. Elsa, the youngest, and most shy of the trio, is also the deepest role-player and hopes to study oil-painting in high school.

Alisa, the most 'established' of the three, sports fire-engine red locks, and sews and creates (and sells) the plush horse-heads to be mounted on short sticks. As kind of the elder statesman, her YouTube videos show the style and mood of Hobby Horse culture, and introduce it to an ever younger legion of enthusiasts. You see Alisa get her driver's license at one point, further indication that she, and the others, are moving headlong towards adulthood.

All three have been mocked, in one form or another, in the past by their schoolmates for their unusual and surprisingly athletic sport of essentially horseback-riding with toy horses. They are still wary of when and where they practice.

Hobbyhorse Revolution, is kind of a manifesto to standing up to bullies and unabashedly doing what you love. A scene of the girls emerging out of the forest joyously into an open field - the soundtrack awhirl of empowering girlpop - tells the tale midway through the film. Later, a flash-mob and march of hundreds of Finnish and Swedish hobbyhorseists, a coming out party of sorts, puts a final triple-underscore to standing up and being proud of your identity.

You can see the girls age over the course of the time Vilhunen was shooting the documentary, perhaps a couple years, both physically, but also in attitude, life-situations, and self-awareness. At that age, everything is in flux, and everything seems to be prioritized the same. One has only to look at how detailed and specific some of the moves and the role-playing is.

Of course, in the competitions, there is a series of grading scores, and again, at that age, we (boys or girls) always feel acutely that we are being watched and judged. It makes a documentary on something so hyper-specific magically become something deeply universal.

Dressage, in one form or another, is a major part of modern society. It may looks slight, and even silly, but beneath the veneer of giggling girlishness brushing up against the tropes of a Christopher Guest comedy, there is a wellspring of insight into the human condition.

Do you feel this content is inappropriate or infringes upon your rights? Click here to report it, or see our DMCA policy.
documentaryFinlandHot DocsHot Docs 2017Selma Vilhunen