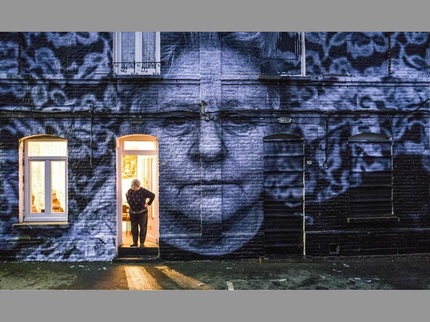 The Grand Dame of French cinema, Agnès Varda's work has ranged from the New Wave in Cleo from 5 to 7, to feminism and friendship in One Sings, The Other Doesn't, to documenting the life of the poor in The Gleaners and I. Her recent work has had a more introspective feel, and she continues somewhat in this vein in her new film. A joyous and bittersuite look at the role of art in everyday life and work, as well as the role of the artist in society, Faces Places is a wonderful addition to Varda's canon, an expansion of her work in self-reflection and her love and attention to French rural and working life.

Varda and photographic graffiti artists JR, having only recently met, team up to take a new kind of art show on the road. Travelling in a van that's shaped like an old-model camera, and equiped with a photo booth and a gigantic photo printer, they visit various towns and spaces around France. They take pictures of locals and paste them in unusual places: the sides of buildings, huge rocks on the beach, shipping containers. In between these stops, they discuss their role as artists, and their life histories and their connection to their art forms.

These stops are not random, nor are the photos they display meant only to look pleasing. As usual with Varda, their is always a covert or overt political message. In one town, where houses that were built for miners are on the verge of being demolished, they reprint old photos of the miners and lay them across the buildings. In the shipyards of northeast coast, photos of the women, wives of dockworkers, are dispyaed several feet high across shipping containers (likely visible out at sea). IN a town of only a few hundred, with one of the last local farmers, Varda and JR post his image on his barn. Many of these places are those forgotten by politicians in power, where work is scarce and money lacking; but these are still citizens of France, and their images are part of the landscape.

But there are moments of whimsy as well, such as when the pair recreate the famous run across the Louvre in Bande à part (albeit with Varda being pushed in a wheelchair by JR), or when JR takes Varda to visit his beloved grandmother. There might be a 50-year age gap between these two, but their friendship and connection, both as people and artists, is clear and carries the film to a higher level. Much as in The Beaches of Agnès, Varda is looking back on her life as a woman and an artist; perhaps looking to JR as the future, of someone who can do some of the same things she did in art, of connecting the larger public to that which is disappearing in France, as well as the artist and art to those, as stated, too often neglected in favour of the urban crowds.

In one sad scene, they have made arrangements to visit Varda's old friend and fellow filmmaker Jean-Luc Godard. But as befits his reputation, he doesn't show up, upsetting Varda with a cryptic yet hurrtful note, referencing her late husband Jacques Demy. This says as much about Godard and his feelings towards any potential audience (i.e. His disdain for them) as it does about Varda, and her love of people.

Indeed, it is not only the love between these two artists that shows, but their love of people, and how they want their art about and for the people. This does not mean dumbing it down, or making of fun of those they encounter. It's also about finding art in the everyday, and placing art in the everday; finding it in the cowfields, the shipping yards, the quiet beaches, and the abandoned towns. Faces Places stands as much as a tribute to Varda's philosophy of work and art as it does to the people and stories she has shared: smart, kind, political, magical, and full of joy with a hint of sadness.

Do you feel this content is inappropriate or infringes upon your rights? Click here to report it, or see our DMCA policy.
Agnès VardaCannes 2017Faces PlacesJR