For a festival notorious for taking itself way too seriously, the opening salvo of the Palme d'Or competition has been filled with movies that are actually pretty weird. Of course, that's incredibly refreshing. Not to say that it isn't nice to see a heavy-hearted awards flick (and the Michael Haneke entry is yet to premiere), but starting things off with a creature feature, a sci-fi crimer, and a black comedy has been a breath of fresh air. With The Lobster director the Yorgos Lanthimos's new film still to come, this is shaping up to be the weirdest competition yet.

The most unapologetically weird of the bunch is undoubtedly Bong Joon Ho's Okja. As Pierce detailed in his rave review, the film is a total joyride. From its rambunctious action sequences to exquisite scenery, director Bong has engineered a movie made to be rewatched. But what's most notable about this story of a girl and her super pig is just how totally weird all of the characters are. Even in its darkest moments (and it does get pretty dark), Jake Gyllenhaal's character is resplendent in his Mugatu-esque antics. Between that character, Tilda Swinton's bizarrely benevolent evilness, and Paul Dano's violent pacifism, it's as if Bong set out to create the most dynamically cartoonish characters he could. It's totally weird, and it totally works.

Perhaps not quite as purposefully weird, Hungarian director Kornél Mundruczó's Jupiter's Moon is a European immigrant drama masquerading as a sci-fi action adventure. The story revolves around a young man gunned down sneaking into the EU who gains levitation powers - and the corrupt doctor who tries to use the man for his own personal gain. Mundruczó is obviously a director with a ton of visual skill and the action sequences are visceral. But the weirdness of the plot is not completely fulfilling and it's difficult to connect to the cast of characters that are all relatively despicable. 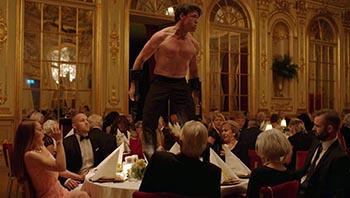 If the exploration of masculine nature is not at all weird as the subject of a Cannes competitioner, the execution of The Square is at the very least, out of the ordinary. Directed by Force Majeure director Ruben Östlund, this latest by the Swede is every bit the follow-up that fans of that film would have hoped for. It's a deeply layered black comedy satire of the art world via a self-described "kind of famous" museum curator played to perfection by Claes Bang.

The complexities of masculinity are clearly a favorite subject of Östlund's and the depths of its banality are mined for comedic riches. Each and every scene is crafted exquisitely from a tiny awkward interaction between Bang's character and his romantic disinterest played by Elisabeth Moss, to an enormous set piece where stuntman Terry Notary gets to perform as an artist performing as a gorilla. It's difficult not to just list every scene as they're all so intensely satisfying but suffice to say that Östlund has created another brilliant film. And yes, it's super weird.

Do you feel this content is inappropriate or infringes upon your rights? Click here to report it, or see our DMCA policy.
Bong Joon HoCannesFestival DispatchesRuben Ostlund

More about The Square