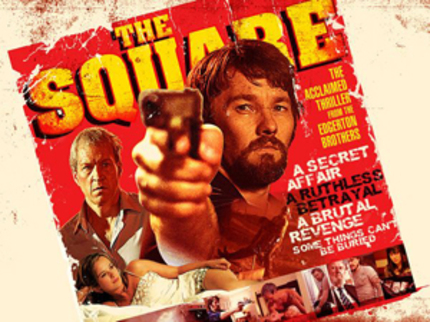 [Ben's review of The Square originally appeared a couple weeks ago but with the film now screening at Action Fest we hereby present it again.]

While giving a great big bear hug to classic noir and thriller tropes, Nash Edgerton's THE SQUARE also manages to snag a pair of jumper cables and give the genres a frightfully good shock to the balls. Mr. "Ain't It Cool" himself, Harry Knowles supplied a nice pull quote, calling the picture, "the best film noir since 'Body Heat'", and while I can't really contrast and compare, Edgerton's flick is a nice thick slice of entertainment, with a healthy helping of karma and irony on the side.

Extramarital affairs are the name of the game as contractor, Ray (David Roberts) and the much younger hair dresser Carla (Claire van der Boom) meet under bridges and hotel rooms - the typical spots when you want time away from your spouse. Ray has a plan, and that plan involves a nice kick back from his latest build site - a fancy honeymoon resort -, a kick back, which will give him enough money to run away with Carla.

The thing is, Carla happens to spy her blue collar hubby, Smithy (Anthony Hayes), with a good sum of Australian dollars, which he then proceeds to hide in the attic. Yup, had you not already known, THE SQUARE takes place in South Queensland, down where people's homes back up to the canals, where rumors of sharks are casually passed around amongst drinking buddies.

It is a tight nit community, and when secrets abound, you better keep them well underfoot. Tensions build when Carla switches out the money satchels, and Ray hires Billy an arsonist (screenwriter Joel Edgerton) to "get rid of the evidence", the evidence being Carla and Smithy's home. Whether it is to the delight of Nash Edgerton, as director, or to the laughing horror of the audience, things do not turn out the way they were planned, and in good pulpy fashion, go from bad, to worse, to the very absolute worst.

Though the film revels in good old fashion exploitative violence with a near whimsical glee, Edgerton never sells any of it cheap and just for thrills. There is a naturalism to the setting and performances which put all that much more weight into the situation, making this a relatively complex, intertwining piece on circumstances and consequences. And let me tell you, those are things these folks do not comprehend too well. Roberts as Ray, stalks through every scene, a man of high stature, haunted and hunted by forces both inside and out. Roberts is a man that wears tragedy as a ridged grimace square on his classic, yet weathered leading man features. To find out that the guy was a relative unknown, even in Australia was a bit of a shock to me. He feels like the older brother to Hugh Jackman for crying out loud.

Like I said karma and irony play a hand in all this, and as good as Edgerton is at the big moments, he may be even better at the subtleties and some gorgeously sinister "bite ya in the ass" metaphors and analogies the film pulsates with. As Ray and Carla's plans turn into schemes that spiral out of hand, a ripple effect is felt across the town. The multiple meanings or allusions to the title itself is quite good stuff, from the role a particular tract of land on Ray's building site plays, to the multiple (both physical and psychological) natures of being trapped.
Children scamper around the adults, playing games in revelry, just as the big folk's world is crashing down on them. The film is riddled with classic allusions to animals and the natural order; the elements are featured heavily, reinforcing themes and brandishing catalysts, spurring on pain at just the right moments. And as much as this may be Nash, brother Joel as the screenwriter, along with Matthew Dabner, have put together an ambitious, yet nuanced and textured structure to these proceedings. It is one that doesn't trip over itself, although it sometimes can get achingly close to convenience plot devices, it is all in good fun.

Further tension is built through Edgerton and cinematographer Brad Shield's use of panning; a technique I don't recall seeing used so well in quite sometime. The quiet, neutral sense of space being passed over, from one person to another, suddenly becomes a ticking time bomb, holding the audience in bated breath, whether in the most smallest, saddest of moments, or just as things ramp up and get well... messy.  And make no mistake THE SQUARE treats its audience well; with respect, and tactfulness, while manipulating the hell out of their emotions, leaving them - yup - on the edge of their seats.

More about The Square